What is Data Link Layer

Definition: Data Link Layer is layer 2 of the OSI reference model that is used in computer network. DLL layer consists more complication and complicated functionalities and liabilities. This layer helps to hide all details of their all hardware and finally it represents to upper layer like as source of communication. Data link layer performs all task in between two hosts, they are linked directly with medium of communication.

The main goal of the data link layer is to move all datagram over an individual node. At the receiving side, DLL layer grabs all data from hardware device which are electrical signal form, and then it assembles them into frame format and finally further proceeds to upper layer.

Here, we will discuss various protocols which are used in the Data Link Layer; like as – 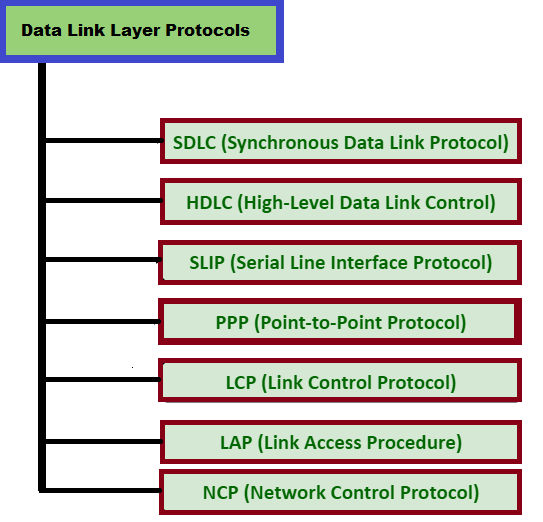 You can say examples of those protocols; below explain each one –

Synchronous Data Link Protocol (SDLC): This protocol was introduced by IBM in 1970, and it is associated part of Systems Network Architecture. SDLC protocol helps to attach remotely devices with mainframe computers at centralized point may be point to point otherwise point to multi point connections. Main role of SDLC protocol is to ensure that all data units must be arrived appropriately and with correct flow from one network unit to further network unit.

High Level Data Link Protocol (HDLC): HDLC protocol was introduced by ISO in 1979, and it is adopted like as associated part of X.25 network system. It is based on SDLC and delivers both reliable and unreliable services. This is bit oriented protocol that is accepted for both communications like as point to point and multipoint.

Serial Line Interface Protocol (SLIP): SLIP is a simply protocol that is added with framing byte at the end of IP packet, and it was designed for transmitting data unit in between the Internet service provider as well as home network users based over the dial up connection. It is not supported to error correction and detection mechanism.

Point to Point Protocol (PPP): PPP protocol is used where to need transfer multiprotocol data in between two different directly linked computer systems. This is a simply byte oriented protocol that is mostly used for broadband communications which have massive load and higher speed. It is supported to error detection system, and it also produces 2 protocols like as LCP and NCP. LCP protocol is used for bringing line up negotiation of options as well as bringing them down. NCP is mostly used for negotiating network-layer protocols.

Link Control Protocol (LCP): LCP protocol was introduced by IEEE 802.2.2, and its main role is to deliver HDCL style services over Local Area Network. LCP is simply PPP protocol that is used for transferring of data frames into different areas like as establishing of connection, testing, and maintenance.

Network Control Protocol (NCP): NCP protocol was a traditional protocol that was used by ARPANET, and it provides various features to users like as getting to access computers as well as other devices at remote area and move files in between multiple computers. NCP is always present in every higher layer protocol as well as supported by PPP protocol, but NCP was altered with TCP/IP in 1980.

There are several responsibilities of data link layer: below explain each one – 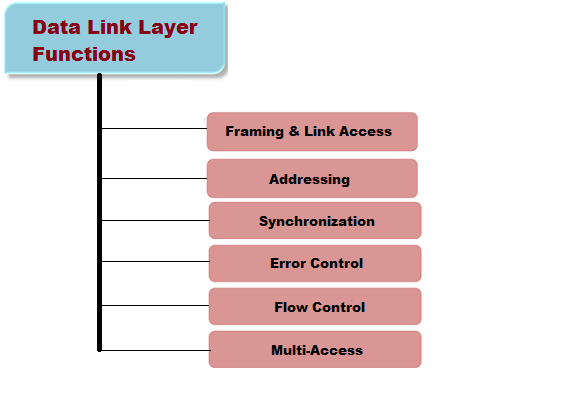 Data link layer produces all addressing mechanism system of layer 2, and then entire hardware addresses are marked as unique at the link. It allows them for encoding into hardware at once of manufacturing.

After sending of all frames on the link and then both machines must be synchronized for transferring to acquire the position.

Due to few issues, some signals are getting problems in transition and bits are flipped. To identify those errors and precede them to recover for getting original data bits, and then it delivers error reporting mechanism system forward to sender end’s.

If,  multiple stations are presented on the similar link with their different speed or capacity. Data link layer enables with flow control that both machine are capable to swap own data on similar speed.

There are several devices which are used in the Data Link Layer; below explain each one –

Bridge: Bridge is electronic device that is used in the computer networking and it helps to establish interconnection along with another bridge under similar protocol.

Switches: Switch is a hardware device that is worked at the data link layer of OSI model, and it helps to link multiple devices over the network. It uses various packet switching for receiving, sending data packets over the entire network.

Modulator helps to convert all data from digital form to analog form over the transmitting point, and other end De-Modulator offer the functionality for converting the similar from analog mode to digital mode at receiving mode.

Network Interface Card: It is also known as “Network Interface Controller“, “Network Adapter” or “LAN Adapter“. NIC is a circuit board that is installed in the computer systems which deliver dedicated network connection with computer.