What is Digital Computer?

A digital computer can be defined as digital systems that are able to get process information at the higher speed. Digital computer receives the input data that it can process and finally converts the output data; and send it to the output devices for displaying at the front of you, for example of digital computers are smartphone, PDA, Tablet, PC, and etc. 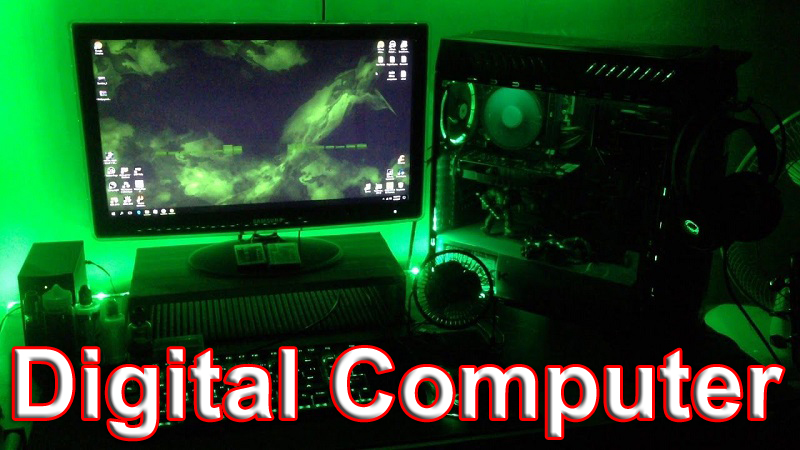 What is The First Digital Computer? 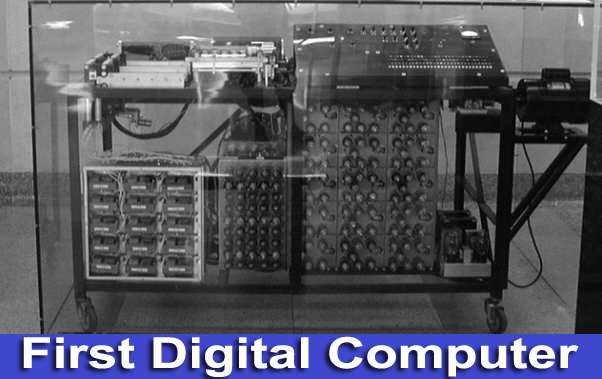 A block diagram of digital computer displays the internal structure of the computer, as we as the block diagram provides the quick overview of internal working work flow of computer system from inserting data to retrieving the desired output. 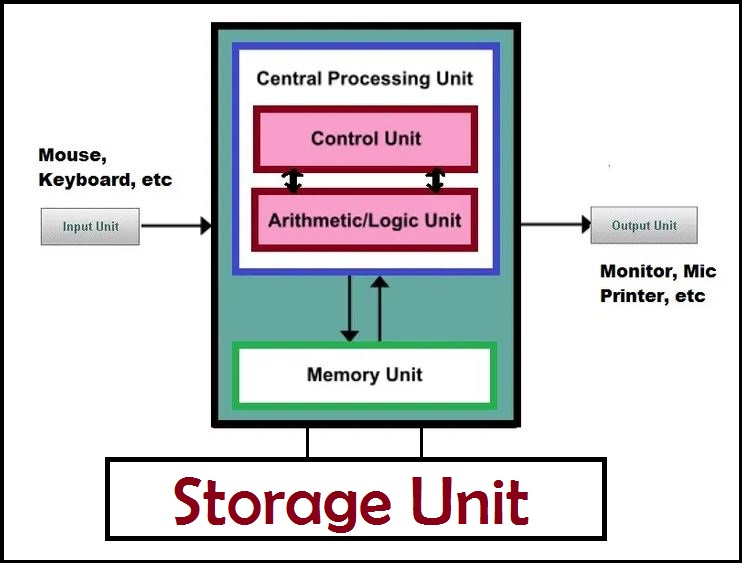 Digital computer system performs all their tasks as block-wise so it is known as ‘Block Diagram of Digital Computer‘.

Digital Computer system performs all tasks along with the combination of major four components, Therefore here we will cover all possible things about components of block diagram of digital computer along with their functions; below shown all things step by steps, you can read them:

Components of Block Digital Computer with Their Functions:

In this section, we will guide you about all components of digital computer with their functions in detail; you can read them:

CPU (Central Processing Unit) is also called the “Brain” or “Heart” of the computer system. CPU is a hardware electronic device that is capable to perform various types of operations like as arithmetic and logical operation. It has ability to perform all calculations, comparisons or operations inside of the CPU.

ALU (Arithmetic logic unit) has responsible to perform all arithmetic and logic operations, which are data inserted via input devices, is stored in the main memory storage unit.

Logical Unit is capable to control the logical operations like as AND, OR, EQUAL, GREATER THAN, and LESS THAN, and so on.

Other operations like as comparing, selecting, matching, and merging data are also performed by Logical Unit.

The control unit (CU) deals to perform all activities and operations of computer inside the CPU. Control unit has a responsible to control input/output, memory, and other devices which are linked to CPU.

Control unit obtains the set of instructions or information, then it helps to convert the instruction set to control signals, then these signals are moved to central processor for later processing. CU is able to understand which types of operations to execute with accurately. The control signals are getting to help as per the prioritizing and scheduling the activates. It allows to make coordination all task inside computer in syn along with input and output units.

It gives to instruct the input unit, where to save data, when input unit obtains it from the user through few input devices.

The output of execution ALU delivers after the calculation is hand over to control unit that direct it move to memory and also to output unit for seeing the output on the screen.

Memory unit also plays the major role in the computer system because it helps to store data and instructions before and after processing. This unit transfers the set of instructions to another unit of system as per the need.

Memory Unit is divided into two categories like as –

Primary Memory:  Primary memory is known as “Main Memory” or “Internal Memory” or “Primary Storage Device” or “Internal Storage Device” as well as they play vital role in computer, because those memories are capable to access all data directly from CPU with the help of various buses. These memories have limited capacity for storage and made by integrated circuits (IC) or semiconductor components.

Primary storage devices are available in two variance such as volatile and non-volatile. Volatile memory is called temporary memory because all data deleted when power get turn off mode but its access time and response time much fine to secondary memory. Non-volatile memory is permanent memory in which nothing data erase when system is turn off.

Register: Registers are included in the CPU. They have low capacity for storing the instructions, and data only on before and after processing mode.

Cache Memory: This cache memory has higher speed for accessing data, and allows to computer for storing piece of data in temporary nature. Cache memory is place at near the CPU and RAM. Cache memory speed is very fast because its travel distance is short between RAM to Cache memory. There are three types of Cache memory such as – Level 1 cache, Level 2 cache, Level 3 cache.

RAM: RAM is primary memory and RAM stands for “Random Access Memory“. Ram is capable to access any data randomly any time as well as from any location to computer. This is volatile storage memory means to temporary memory in nature, because entire data goes delete while computer get turn off mode. RAM regains all data from CPU in run-time and sends to control unit, and it is a fastest memory to hard disk.

Static RAM: Static RAM is also volatile primary memory, and it made by flip-flop. Static Ram works in computer as a form of Cache Memory, but it consumes more power as well as more costly to DRAM. In Static RAM uses six transistors, and each transistor use for one bit.

Dynamic RAM: Dynamic RAM is other types of RAM, and volatile also in nature. In which use the capacitors for storing data in few milliseconds when power turn on. Dynamic RAM has slow speed as well as consume low power but has capable to store more data compare to SRAM. DRAM is cost effective as well.

There are four types of ROM such as:

MROM: MROM stands for “Masked ROM“.  MROM has to contain the all pre-planned programs like as piece of instructions, and cheaper as well.

PROM: PROM Stands for “Programmable Read Only Memory“. Users can store any data as per their requirement because these ROM is available in market in blank. But in which store instructions (programs) only one time because after filling programs it cannot delete.

EPROM: EPROM Stands for “Erasable and Programmable“. In these types of ROM, users have power to editing (erase) the stored instruction (program) in EPROM. EPROM is erasable by ultra-violet light for some time like as 40 minutes.

EEPROM: EEPROM Stands for “Electrically Erasable and Programmable Read Only Memory“. In EEPROM, all activities such as programming and erasing are performed by electrically. This EEPROM is able to reprogrammed and erased in more than ten thousand time. Entire chip cannot be erased one time, only erase one byte at once.

There are four types of secondary memory; below shown all, you can check them!

Optical Storage Devices: In the optical storage devices, all read and write activities are performed by light. All recording information stores at an optical disk. As per the opinions of data scientist that compact space is most useful for huge data storage. Their big advantages are not more costly, light weight, and easy to transport because it is removable device unlike hard drive.

Flash Memory Devices: Flash Memory was introduced by Dr. Fujio Masuoka in 1980. Flash memory is also known as electronically erasable programmable read only memory (EEPROM), because in which piece of  code like as programming can be write and erased by electrically. Flash memory also uses for the storing data to computers as well as electronic devices such as USB flash drives, MP3 players, digital cameras and solid-state drives. Flash memory is non-volatile in nature because all data are persisted in the memory when power is turn-off.

Online Cloud System: Clouding is systematically model for storing data in computer, and in which entire data are stored in logically nature. Those clouding system are managed by other hosting companies. With the help of online clouding, all data can be access by couples of users anytime and anywhere. Big advantages are not place limitation as well as no need carry any storage device.

The output unit of the computer system delivers the results of computation and displaying the output outside the world. The output unit generally works as the opposite process of the input unit and it convert the binary language digitalized information to electronic impulses, which are readable to the output devices. There are few output devices, which are commonly used like as monitor, projector, headphone, speaker, etc.

What is digital computer with example?

The digital computer can be defined as digital systems that are able to get process information at the higher speed. Digital computer receives the input data that it can process and finally converts the output data; and send it to the output devices for displaying at the front of you, for example of digital computers are smartphone, PDA, Tablet, PC, and etc.

What is digital computer and digital system?

Digital computers are also known as the ‘Digital System’ because they are able to perform several computational tasks with in less time duration. The first digital computer was developed by John Vincent Atanasoff in 1940s; and Clifford E.Berry one of their students was helping for inventing.

What are the components of a digital computer?

A digital computer has four basic functional unit like as (1) input-output equipment, (2) main memory, (3) control unit, and (4) arithmetic-logic unit. Each one is explained above in this article; you can check them.

What is digital computer and explain the function of each block?

Through this article, already we have been explained about all blocks of digital computer in detail, you can read them.

Through this article, you have been fully educated about what is digital computer; as well as block diagram of digital computer with its components and their functions with ease. If this article is valuable for you, then please share it along with your friends, family members or relatives over social media platforms like as Facebook, Instagram, Linked In, Twitter, and more.