What is UTP Cable in Networking

Definition: UTP stands for “Unshielded Twisted Pair” cable, and it contains 100 ohm copper cable that has 2 to 1800 unshielded twisted pairs surrounded by an outer jacket. It has no any metallic shield, and helps to make small in diameter but does not provide better protection appose to electrical interference.

How does UTP work: UTP cable has four pair of color coded copper wires together and they are covered with flexible plastic sheath. Due to twist of copper wire, it gets cancel electromagnetic interference from the external sources. 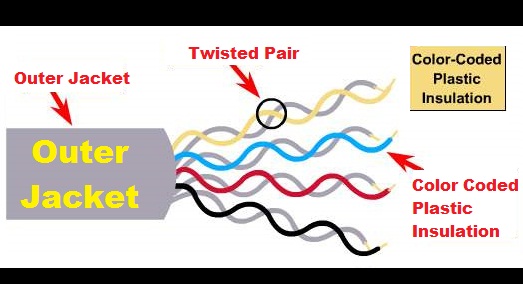 Unshielded twisted pair cable does not contain any other extra shielding such as meshes or aluminum foil, which are appended in bulk, are used. UTP cables do not implement any shielding to counter EMI and RFI effects.

UTP cables are mostly used in the computer network as well as in the telecommunication sector as telephone wires and Ethernet cables. It is small size, so easy to installation.

Unshielded twisted pair has fives categories that is defined by TIA/EIA 568 standard; below mention each one – 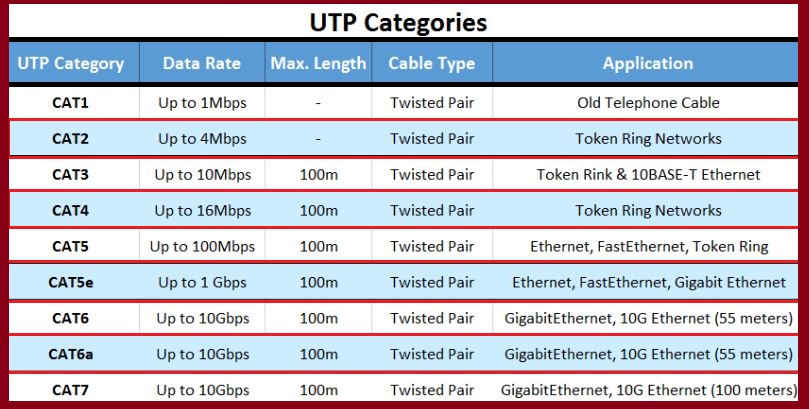 CAT1: CAT1 is only used in telephone wiring, but it is not able to support computer network traffic and is not twisted.

CAT2: CAT2 is commonly used for token ring networks,, and it can support up to 4 Mbps transfer data speed.

CAT3: At present days, CAT3 is commonly used in phone lines, and it can support 10 Mbps for up to 100 meters.

CAT4: CAT4 is designed especially for token ring networks and other networking system, because it is capable to support 16 Mbps for up to 100 meters.

CAT5: It is mostly used in Ethernet based LANs networks, and it consists four twisted pairs, as well as having ability to 100 Mbps for up to 100 meters.

CAT5e: CAT5e is a sub type of CAT5, so it can also use in Ethernet based LANs networks. It contains four twisted pairs, and can support 1 Gbps for 100 meters.

CAT6: CAT6 was introduced to support gigabit Ethernet that allows gigabit transmission over CAT5e cable. It consists physical separator in between four pair that helps to decrease electromagnetic interference.

CAT6e: CAT6 has four tightly wounded twisted pairs, and it is mostly used in Ethernet-based LANs and data center networks. I can support 1 Gbps for up to 100 meters and 10 Gbps for up to 50 meters.

CAT7: CAT7 contains 4 individually shielded pair plus an extra cable shield to provide the protection the signals from crosstalk and electromagnetic interference, and it can support 10Gbps at lengths of up to 100 meters.

Uses and Applications of UTP Cable

There are various benefits of unshielded twisted pair cable; below explain each one –

There are various limitations of unshielded twisted pair cable; below explain each one –