In this article, we will cover all possible things about various advantages and disadvantages of DRAM; as well as applications & uses of DRAM (Dynamic Random Access Memory) without getting any hassle.

DRAM (Dynamic Random Access Memory) is a simple type of semiconductor memory, and it is designed specially to store data or program files which are needed by computer processors for performing their functions. Capacitor represents two possible values like as 0 and 1 that can be hold in a bit, and these values mark as charging and discharging. 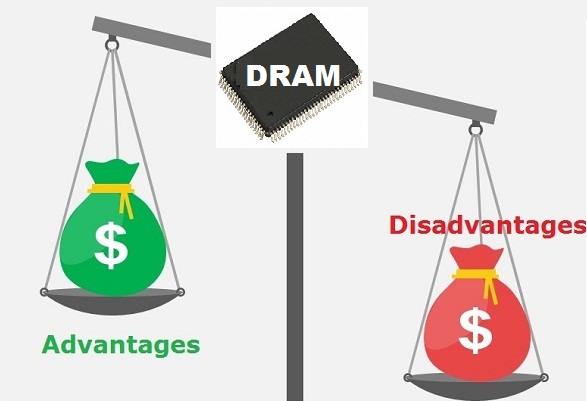 In DRAM, several capacitors are used for storing every bit of data. This is very simple path to save data in its memory because it needs small area to store same data to SRAM as well as it is capable to store massive data than to SRAM but it requires the frequently refreshing of its circuit for its charging, so it consumes more power compare to Static RAM.

DRAM was firstly introduced and patented by Robert Dennard in 1968, and then it was released by Intel in October, 1970.

DRAM is capable to store more data compare to SRAM as well as it is cheaper than SRAM. Dynamic RAM is most commonly used in the personal computer systems and workstations.

Here, we will spread light on the several characteristics and benefits of dynamic RAM for main memory.

There are several limitations of DRAM, such as –

Applications and Uses of DRAM

Due to cost efficient storage of DRAM, it is used in several areas such as –

Through this article, you have completely educated about various advantages and disadvantages of DRAM; as well as applications & use of DRAM with ease. If this content is useful for you, then please share it along with your friends, family members or relatives over social media platforms like as Facebook, Instagram, Linked In, Twitter, and more.