Through this article, we are going to cover about 18 advantages and disadvantages of Windows 10 operating system; as well as pros and cons of Windows 10 OS with ease. This is unique post over the internet, so make ensure that after reading this post; you will get exactly to know many drawbacks and benefits of Windows 10 without getting any issues.

Windows 10 is the latest version of Microsoft Windows operating system, and released in July 2015. This OS is designed mostly for tablets, embedded systems, PCs, and internet of thing devices.  The Windows operating system has many different versions like as Windows 8, Windows 7, Windows Vista, and Windows XP. Most of old versions of Windows usually work on the desktop and laptop devices, but Windows 10 OS is able to run smoothly on the tablets.

Also Read: Advantages and Disadvantages of Windows 11 | Pros and Cons 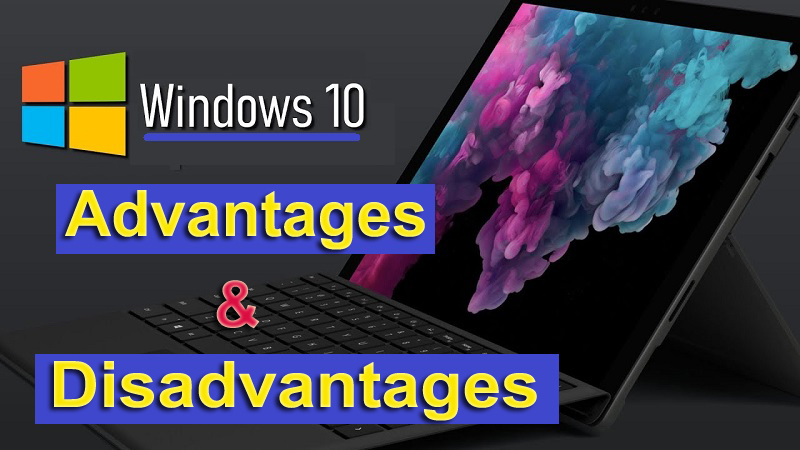 While anyone using the Windows 10 can easily upgrade legacy machines directly from Windows 7 otherwise Windows 8 to 10 without getting any re-imaging and time- consuming system wipes and upgrade procedures. Windows 10 has built-in abilities that let corporate IT departments for using the MDM (Mobile Device Management) software to protect and control devices working the operating system. But, Windows 10 Mobile is a special version that is designed for smartphones.

In this section, you will learn about various pros and cons of Windows 10 operating system over other Windows versions; as well as limitation and benefits of Windows 10 OS with ease.

Windows 10 operating system has many advantages over the Windows 8/7 and Vista and XP; below shown all, you can read them:

Windows 10 is going to design in such way that is fastest to its below versions, by default. Its boot and shutdown time is very less than to Window 8 and other older versions. The process of booting is fastest, cause of disabling unwanted start up processes and by encountering the boatware.

Window 10 operating system provides the better security to other older versions of Windows 10 because the antivirus program that comes along with Windows 10 so it much  better than before. Window Defender Antivirus is enabled with this operating system that is advanced software ability to protect your computer system from digital threats.

Windows 10 OS is also capable automatically to encrypt files, if it finds the PC infected being malicious program. The defense and authentication concept is also strong in Windows 10 operating system. So, third parties are unable to easily track a password; as well as face recognition and finger print scanning is also made tighter.

While, you using the web, then it is best way to improve Windows performance is to use a web browser optimized for Windows. This browser is come built-in along with Windows 10, so it is more potential for many errors to be installed by default on Windows and cause further damage. Windows 10 OS also allows to quickly getting access their settings, file, and information. This setting panel lets you to get customized each aspect of your computer enabling security options, desktop wallpaper, start menu items, and your saved passwords.

The Windows 10 operating system is capable to run on a variety of hardware. Most of new models are also able to get boot directly into Windows via a USB port, and then you don’t need to uses any third party program. Your computer can be used on multiple devices with just one device. With using laptop; you can also link it to a TV or monitor through a USB cable and use your computer without leaving a chair. With using a tablet, you can also use it as a keyboard and mouse and use it as a gaming console on the go.

That means, Windows 10 allows users to use your PC on many hardware and connect it to different devices, such as hard drive, printer, sound card, scanner, and etc. without any hassle.

Microsoft released the new web browser along with Windows 10, is known as Microsoft Edge that is best alternative to Windows Explorer. This new Edge browser enables with various features that makes it one of best browser ever developed. This browser is well designed in respect of extensions, page layout, and privacy. It also allows to Cortana voice feature that is in-built with this browser to let users to find by using the voice command.

Windows As A Service

Windows offers a subscription model that means paying a small monthly fee instead of the purchasing something outright. Microsoft may not be revising a monthly fee for this operating system, but they are selling quarterly or yearly Windows 10 subscription to let users to take enjoys new abilities and features.

Windows 10 operating system allows to get streamlines automatically start process by eliminating unwanted bloatware; and by deleting this, it lets for getting fastest access from all users and makes the process more efficient overall. Windows 10 also allows to fastest internet browsing and better overall performance via better security measure.

Windows 10 OS lets users to merge many apps in one place like as the Gmail/calendar, YouTube, Google search engine, and Google Play Store. So, users can take more enjoy with personalized experience that all information can be merged.

If you may ask Google about any upcoming appointment then it will look through your calendars. If you fire query to book a flight, then Google can remind you of your upcoming flights.

The Windows 10 operating system is enabled with DirectX 12 that offers to enhance gaming experience. Most of games are capable to get achieve higher frame rates. Therefore, whenever you select the gaming title to play, then you can make ensure that it will run smoothly at the operating system.

Windows 10 OS allows you to shift the interface design to finger interaction by engaging the tablet mode. This also means interaction can be done along with one tap and the buttons are larger. When you get return to the dock or laptop, you can change over to desktop mode that allows keyboard and mouse interactions.

It is easier to switch apps in the Windows 10 OS by using a feature, is named ‘Task View’; but this feature is also existed on the previous version still this is new in the Windows 10. By using this, users are going to able to switch between different tasks with pressing Alt + Tab key. You can also append another task to the desktop.

Here, we will spread light on several drawbacks and disadvantages of Windows 10 operating system; you can read them:

Mostly PCs are getting the preinstalled with Windows 10 operating system; but they are not latest version of Windows 10, it is usually basic or home version. These versions are containing many bugs that can be erased by time to time updates. Alternatively it, you might need to buy a professional version that is an expensive product.

When, you are getting to upgrade Windows 10 from Windows 7 or 8; but sometimes you don’t like it. Then you are unable to revert it back to the previous OS directly. You must be reinstalling the operating system from the scratch. Then it will be involved more cost for installing Windows 10. A basic home version of Windows 10 price about $ 139; but you buy the professional version approximately cost $200.

Microsoft has enabled with Cortana as well as Edge and new version of Internet Explorer that is inside of the OS itself. As privacy issues, it comes to light when power user as well as developers get discovered that Microsoft could track users through their privacy setting option.

Microsoft gets to claim user can turn off Cortana whenever they wish, though their design is to offer you with helpful information. So, if you are getting to concern about your privacy but still wish to get installs Windows 10, then you may wish to make ensure you are on upper of your settings.

Windows 10 OS has no longer a Windows Media Center, as well as no standard DVD player available after getting to install it either. Windows 10 is not enabled with Windows Photo Viewer. But, you can get download and use it; it can worth knowing what is and isn’t present before making the decision of whether to get upgrade or not.

Windows 10 operating system is not going to a touch friendly, because mostly touch inputs are turned off in the Windows 10. For instance, you are unable to shut any app just by swiping; as well as object selection is also not easily. So it is not suggested to be used in devices like as Tablets that rely entirely on the touch screen technology.

What are the advantages of windows 10 over windows 7?

What are the main 5 advantages of Windows 10 operating system?

There are many advantages of Windows 10 OS like as:

What are the main disadvantages of Windows 10 OS?

Before using Windows 10, you should know some cons of Windows 10 operating system like as: Necessary Windows Updates, Reverting OS, Concerns About Privacy, Lost Apps, and Touch Interface. Each one is explained above in this post; you can read them.

Through this blog post, you have been fully educated about many advantages and disadvantages of Windows 10 operating system; as well as pros and cons of Windows 10 OS with ease. If this article is useful for you, then please share it along with your friends, family members or relatives over social media platforms like as Facebook, Instagram, Linked In, Twitter, and more.