3G and 4G are the networks that allow your mobile phone make connection to the Internet. The ‘G’ stands for the ‘Generation’ that represents as update or upgrade. The 3G is third generation and the 4G is fourth generation and so on. Now, here we will guide you about many difference between 3G and 4G technology; as well as comparison of 2G vs 3G vs 4G vs 5G with ease. So, at the end of this article, you will definitely fully aware about difference between 3G and 4G without any hassle.

As simple as, the ‘G’ stands for the ‘Generation’; while getting to make connection to the internet, then speed of connection varies according to the signal strength that are showing in abbreviation such as 2G, 3G, 4G, and 5G on any mobile device. Every generation of wireless broadband is going to define as the set of telephone network standards that explores the technological utilization of the system.

The main objective of the wireless communication is to offer the higher quality, reliable communication just as wired communication; as well as every new one generation is also going to represent a big leap in that direction. Cause of fastest reform in mobile technology, mobile communication is getting more popularity in last some years.

Difference Between 3G and 4G

Difference in Between 3G and 4G in Tabular Form 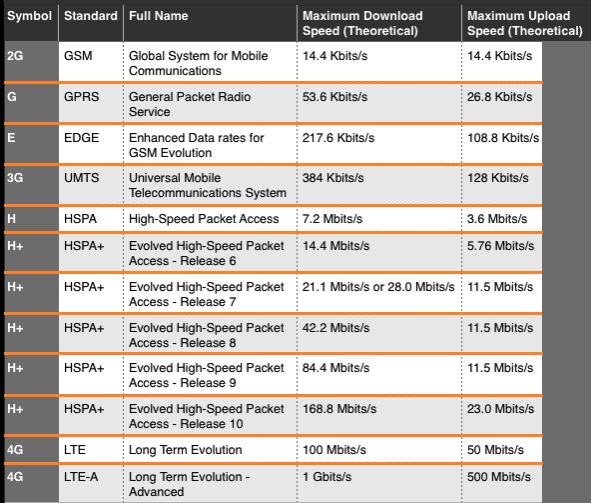 Key Differences Between 3G and 4G

Data Consumption Price: In 3G technology, data pack price are very cheap compare to 4G technology as it offers the low speed over the internet, but 4G is fastest to it.

Communication Channel: The 3G technology allows the broadband for internet service; whereas the 4G technology offers the ultra-broadband service.

Comparison Between 3G and 4G Technology

Here, we are  also going to explore many other facts about comparison in between the 3G and 4G technology; below shown each one, you can check them:

3G stands for ‘Third Generation’; and this generation for the standard of services for mobile telecommunication that going to satisfy the IMT-2000 (International Mobile Telecommunications – 2000). It offers the user along with capability to transfer data and voice at the same time over very same network into form of instant messaging, downloading, and emails.

The 3G are getting to support at the maximum data transfer rate like as:

3GPP stands for ‘3rd Generation Partnership Project’ that was developed while getting to formation of governing bodies, which are enabled with both GSM and UMTS. 3GPP was doing to work underneath observation of ITU-R; it is one of sector of ITU.

It is going to responsible to manage the international radio frequency spectrum, to make ensure the sufficiently using of spectrum and get defines technology families, associates certain parts of the spectrum along with the families.

The 4G stands for ‘Four Generation’ that is basically venture for evolving and incorporating the 3G, 2G, short range system, wireless LAN, and fixed wire system into broadcast of a single network structure that is not able to coherent and consistent but also perform all functions.

4G is the extension of 3G technology that offers the abilities defined by ITU (International Telecommunications Union) in IMT (International Mobile Telecommunications) enables some features such as flexibility, efficiency, scalability, self-governance, and security to get support interfacing along with different kinds of networks as well as multitude of new one and existed services.

The 4G offers the fully converged customised services like as data, voice, and multimedia at the 100 Mbps data rates as well as pervasive mobile access for:

The advanced version of current technologies are going to cover GSM, GPRS, CDMA, IMT-2000, W-CDMA, CDMA one, Wireless LANs and Bluetooth are integrated into 4G. As well as, the higher quality audio-video streaming over edge to edge Internet Protocol is expected.

The main objective of 4GLTE was to get achieve higher mobility and global connectivity. The IP Core network is evolved furthermore to support higher data rates, and modern application services and management of IP and radio network much more efficiently and has more exacting needs.

Every generation is getting to improve over its predecessor. There are many ground comparison the cell network over; so here, following the comparison in between the 2G, 3G, 4G, 5G.

What is the main difference between 3G and 4G architecture?

Is there a big difference between 3G and 4G LTE?

LTE stands for ‘Long Term Evolution’ that is used for the specific kind of 4G technology. It provides the fastest mobile internet experience, so it is known as ‘4G LTE’. The 4G LTE enabled smartphone can get download files from the internet up to 10 times fastest compare to 3G.

What was a major difference between 4G and 3G other than speed?

How much slower is 3G compared to 4G?

The 4G has the average downloading speed around 14 Mbps (five times faster to 3G) and average upload near about 8Mbps.

I hope that you have been completely understood about several difference between 3G and 4G technology; as well as comparison of 2G vs 3G vs 4G vs 5G with ease. If this blog post is useful for you, then please share it along with your friends, family members or relatives over social media platforms like as Facebook, Instagram, Linked In, Twitter, and more.