What is Presentation Layer

Definition: Presentation layer is 6th layer in the OSI model, and its main objective is to present all messages to upper layer as a standardized format. It is also known as the “Translation layer“. 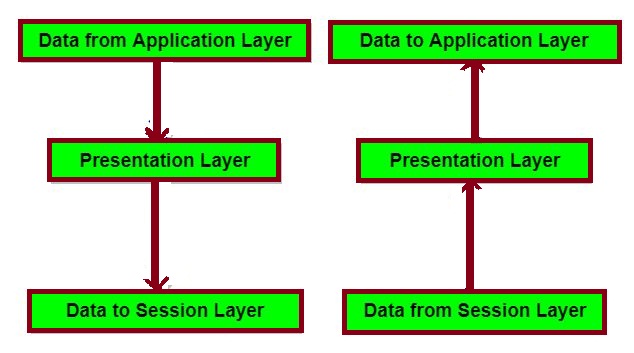 Presentation layer performs various functions in the OSI model; below explain each one –

Presentation layer is used various protocols; below list is available –

Here, we will discuss all examples of presentation layer protocols; below explain each one –

Multipurpose Internet Mail Extensions (MIME): MIME protocol was introduced by Bell Communications in 1991, and it is an internet standard that provides scalable capable of email for attaching of images, sounds and text in a message.

File Transfer Protocol (FTP): FTP is a internet protocol, and its main goal is to transmit all files in between one host to other hosts over the internet on TCP/IP connections.

Network News Transfer Protocol (NNTP): This protocol is used to make connection with Usenet server and transmit all newsgroup articles in between system over internet.

Apple Filing Protocol (AFP): AFP protocol is designed by Apple company for sharing all files over the entire network.

Lightweight Presentation Protocol (LPP): This protocol is used to offer ISO presentation services on top of TCP/IP based protocol stacks.

NetWare Core Protocol (NCP): NCP is a Novell client server model protocol that is designed especially for Local Area Network(LAN). It is capable to perform several functions like as file/print-sharing, clock synchronization, remote processing and messaging.

Network Data Representation (NDR): NDR is an data encoding standard, and it is implement in the Distributed Computing Environment (DCE).

Telnet (Telecommunication Network): Telnet protocol was introduced in 1969, and it offers the command line interface for making communication along with remote device or server.

Tox: The Tox protocol is sometimes regarded as part of both the presentation and application layer, and it is used for sending peer-to-peer instant-messaging as well as video calling.

eXternal Data Representation (XDR): This protocol provides the description and encoding of entire data, and  it’s main goal is to transfer data in between dissimilar computer architecture.

25 Packet Assembler/Disassembler Protocol (PAD): Main objective of this protocol is to obtain all data from group of terminal and allots the data into X. 25 packets.