What is OSI Model? 7 Layers Explained with Functions | Full Form of OSI

OSI stands for (Open Systems Interconnection) model is a conceptual technique that is going to describe about how the networking system make communication and send data from a sender to recipient. Therefore, now we will guide you about what is OSI model and 7 layers explained with functions; as well as full form of OSI model with ease. Make ensure that at the end of this article, you will get fully educated about what is OSI Model without any hassle.

OSI model likes as universal language in computer networking system, and it is totally depend on their abstract layers such as (Physical, Data Link, Network, Transport, Session, Presentation, and Application).

Every layer is allotted for specific task, and every layer is self contained, so that each layer in OSI model is capable to perform their functions independently. Internet modem is not depending on the OSI conceptual model, but it helps to troubleshoot all network issues.

Here, we will explain 7 network layers of IOS Model with their functions; below describe each one: 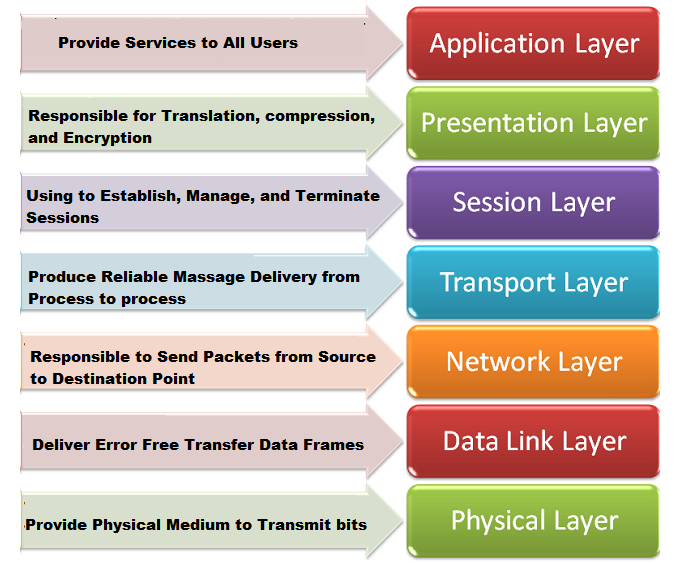 Physical layer has last position in the OSI reference model. The main role of physical layer is to make physical connection in between all devices which are linked with over the computer network, and it has ability to contain all data into bits form. It is other main responsibility is to transmission every bit from one connected node to another and so on. This layer will receive data and converted it into bits form such as 0 or 1 form, and finally it moves them toward Data Link Layer.

The data link layer likes as network layer, and it helps to transfer data in between multiple network devices over sane network. This layer grabs all packets from network layer and splits them into small parts, and these small parts known as “Frames”. Data link layer has responsibility to flow control and error control over intra-network communication. When packet reaches in a network, then major role of DDL layer is to send it to Host point with the help of MAC address.

Data Link Layer (DDL) has two variants like as:

Network layer helps to transmit data from one host to another host that is placed over different networks. This layer implements multiple packet routing system for identifying best physical route for data to arrive appropriate destination point like as choose of shortest path for making transmission of all packets, from number of routes are available. Network’s header contains all sender & receiver’s IP addresses.

Transport layer is also known as “Heart of OSI”. Transfer layer provides the best point to point communication in among of two nodes. It grabs all data from session layer side and splitting it into multiple parts, is known as “Segments” before moving them toward network layer. This layer is used on the all receiving network devices, which are getting to responsible to reassemble all segments into data form, and this data is consumed by session layer.

Main objective of transport layer is to flow control and error free control. Its flow control monitors maximum speed of data transmission that sender host is getting fastest connection, and it does not degrade receiver along with slow connection.

Transmission Control Protocol: This protocol allows to entire system to make communication over the internet, and it helps to build and maintains connection in between all hosts.

User Datagram Protocol: This is untruth able transport layer because in this scenario receiver is not able to move an acknowledgement, when packet is arrived.

Note: Operating system helps to operate the transport layer, so it is integrated part of O/S, and it makes communication along with Application layer by firing system calls.

Session layer helps to generate several communication channels in between multiple devices, they known as “Session”. This layer has responsibility to open sessions when data is getting to transfer, and finally shut down when communication ends. Session layer is able to set checkpoint while moving data, if session is got hindrance then network device has right to resume data send from last checkpoint.

If, two network devices want to make communication over encrypted connection then this layer has responsibility to append  encryption on the sender side while decoding the encryption on the receiver side which is capable  to present the application layer along with unencrypted and readable data.

Application layer protocols enable with HTTP as well as SMTP.

What is the 7 layers of the OSI model with example?

The OSI model is a conceptual technique that is going to use for exploring the functions of a networking system. It consists the seven layers like as Physical, data link, network, transport, session, presentation layer and application layer. Examples for Physical layer are Ethernet cable and Serial Cable.

Why is it called OSI model?

The OSI (Open Systems Interconnection) model is the conceptual framework that is designed by the International Organization for Standardization, which allows to make diverse communication system to communicate with using of standard protocols.

Why does the OSI model have 7 layers?

The main concept of OSI is the process of making communication in between two endpoints in a network that can be spitted into seven different group of related functions or layer. Every user or program is on the device that can offer those 7 layers of function.

What are the functions of the OSI layers with diagram?

The OSI model assists the uses and operator of computer networks to identify the needed hardware and software to establish their computer network. As well as getting to understand and communicate the process the followed by the components making communication across the networking.

Where is OSI model used?

Mostly, IT networking professionals are going to use the OSI model or conceptualize; how data is sent or obtained over the network.

Why is OSI important?

The OSI lets you to determine the threats across your entire tech stack, as well as OSI model is also used for decades to assist IT professionals networking and troubleshoot issues.

Now i make ensure that you have completely learnt about what is OSI model and 7 layers explained with functions; as well as full form of OSI model with ease. If this post is helpful for you, then please share it along with your friends, family members or relatives over social media platforms like as Facebook, Instagram, Linked In, Twitter, and more.