What is Physical Layer

Definition: Physical layer is a layer 1 in the OSI model that plays major activity for interacting along with hardware components and signal mechanism system. This layer actually deals with making connection of two distinct station points. Physical layer specifies the hardware resources, frequencies, pulse, and cabling which are represented to binary signal like as 0’s and 1’s.

Read More – What is OSI Network Model with 7 Layers

Physical layer delivers own services to Data link layer then DLL layer provides all frames to physical layer, and physical layer alters them into electrical pulse which like as binary form, and finally these binary data is moved to wired or wireless transmission media.

In the physical layer, two distinct types of techniques are used for signal transmission over the network. Such as –

In this method, we have to both rights send and receive data over single line in order but before transmitting data on the distinct time frame, we must be divided those data, and this process is known as “Time Division Multiplexing”. Best example of baseband signaling is Ethernet that is used in the Local Area Network technology.

In the broadband signaling method, we can use only one line for sending and receiving signal via different frequencies for outgoing and incoming data, so it is known as “Frequency Division Multiplexing”. Its best example is “Television”.

Here, we will explain main functions of physical layer 1 in OSI model and working as well; below explain each one- 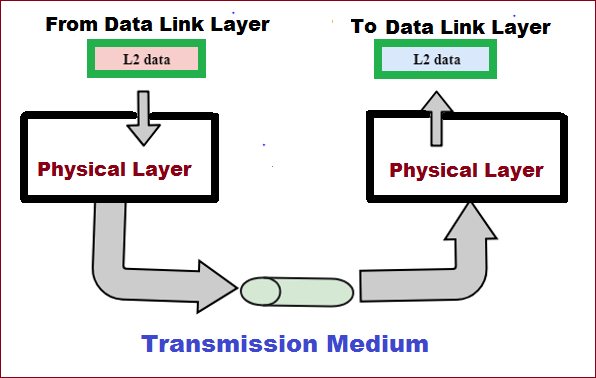 Representation of Bits: This layer consists data like as stream of bits, and before transmission of those data must be encoded into signals such as 0’s and 1’s are converted into signal.

Bit Rate Control: Physical layer can pre-defined transmission rate of flowing all bits such as how many bits can be sent in per second.

Physical Topologies: Physical layer defines the physical layout structure of different types of components (devices/nodes), which are managed over the network like as ring, star or mesh, bus topology etc.

Transmission Mode: Physical layer also specifies the mode where to flow all data in between multiple linked network devices. It allows some transmission modes like as simplex, half-duplex and full-duplex.

Physical Layer Examples of their Devices are: