What is Application Layer

Definition: Application layer is 7 layer of the OSI model. This layer provides the better interface that helps to directly interacts along with software application and offers common web application services. This layer also fires a request to presentation layer, and it also delivers the network services to end-users. 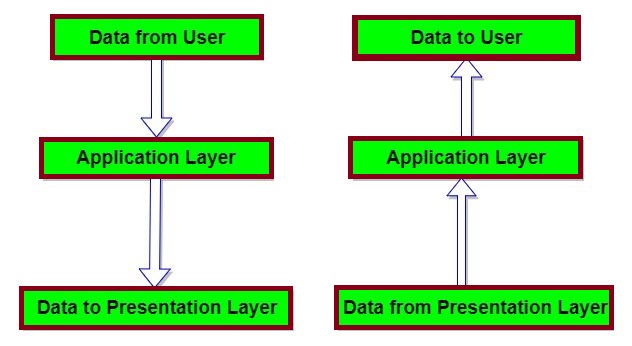 The application layer provides many services, including:

Here, we will explain various protocols which are used in the Application layer; below explain each one–

There are several examples of application layer protocols; below explain each one –

Telnet: It stands for “TELecomunications NETwork”, and it offers various permissions to Telnet clients to access several resources of Telnet server.

File Transfer Protocol (FTP): FTP protocol allows transfer all files between local and remote system, and it works on the surface of TCP/IP.

Trivial File Transfer Protocol (TFTP): This is simple protocol that allows the file transfer functionalities without any user authentication.

Simple Mail Transfer Protocol (SMTP): SMTP is a communication protocol that is used for mail server for transmitting emails over the internet system.

Domain Name System (DNS): DNS works like as phonebook over the internet that allows to user for getting access information online with using of domain name such as digitalthinkerhelp.com.

Bootstrap Protocol (BOOTP): BOOTP protocol is used in the computer networking over the internet where to get IP address automatically to other devices from server.

Simple Network Management Protocol (SNMP): SNMP protocol is used as framework that helps to control multiple devices over the internet.

Common Management Information Protocol (CMIP): This protocol is used for getting management over the network system.

Post Office Protocol (POP): POP is a computer networking protocol that is used for accessing and retrieves email from a remote mail server for access by the host machine.

Network file system (NFS): NFS protocol was developed by Sun Microsystems, in 1984, and it is distributed file system protocol that provides the access to user on client system for retrieving all files over the network system in the similar way.

Line Printer Daemon (LPD): This is printer protocol that helps to make connection with workstation and printer over the TCP/IP network system.

X window: This protocol is used for writing of graphical user interface based over the client/server applications, and its main objective is in the networks of interconnected mainframes.

Dynamic Host Configuration Protocol (DHCP): This is network protocol that is used on IP network where IP address was allotted by the DHCP server automatically as well as other information to every terminal system over the network.

Hyper Text Transfer Protocol (HTTP): HTTP protocol allows transmitting all hypermedia documents like as HTML, and it was developed for making communication in between the web browser and web servers.

MQTT: MQTT stands for “Message Queuing Telemetry Transport” and it is lightweight messaging protocol. This protocol is introduced mainly for sensor networks and wireless sensor networks.

SMQTT: SMQTT stands for “Secure Message Queue Telemetry Transport”, and it is an encryption based light weight messaging protocol.

CoAP: CoAP stands for “Constrained Application Protocol”, and it is developed for constrained Hardware. If this hardware is not capable to support to HTTP or TCP/IP, then they can use CoAP Protocol.

DDS: DDS stands for “Data Distribution Service”, and it was introduced by Object Management Group (OMG) for real time systems.

XMPP: XMPP stands for “Extensible Messaging and Presence Protocol”, and it is an XML based messaging protocol. Main objective of XMPP is to allow the real time and scalable networking in between multiple devices and other things.