VPN stands for ‘Virtual Private Network’ that allows to hide your self-identity and protect your connection over public Internet. VPN also allows to make your browser as private, invisible your IP (Internet Protocol) address and make ensure that your Internet service provider not eligible to tract you. 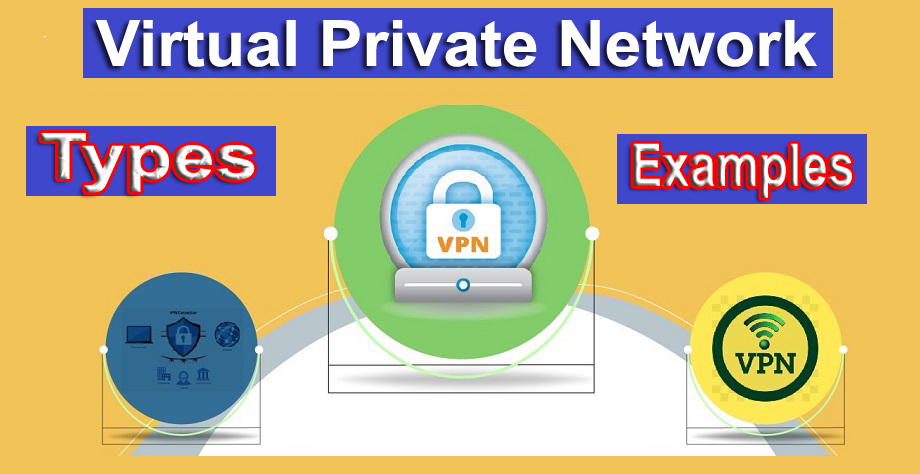 A VPN is a secure tunnel in between your device and internet, as well as it also protect you from interference, censorship, and online snooping. Virtual private network is a easiest and effective method for user to get protection their internet traffic and keep your identification as private. When you are going to connect to a protect VPN server then your web traffic travel through an encrypted tunnel, so nobody able to track it such as your internet service provider, hacker, and etc.

There are 6 different types of Virtual Private Network, and they are classified depend on their protocols, setup, features, and environment. Below shown each one in detail; you can check them:

Remote Access VPN allows a user to make connection with a private network and get access all its resources and services as remotely. It is establish the connection in between user and all private networks via the Internet, and then its connection is secure and private. This VPN is most helpful for both small business and home users as well.

If any worker of the company is out of station then they are able to use a VPN to make connection with her/his private network of company and remotely get access all files and other resources over the private network.

Personal virtual private network is also known as the ‘Commercial’ or ‘Consumer’ VPN because it also encrypts your established connection, hide your self-identification online and allows user spoof your geographic area. Beyond of this, personal VPN performs by providing you access to the public internet over the encrypted connection.

When you get remote access VPNs then it allows you to connect to a local network from anywhere, and they expect that the user will stay at one location. When the user disconnects then IP tunnel will be also close. The mobile VPN is a great solution to the remote access VPN because the user is not possible to stable connection, over the same network for the whole session.

The site to site VPN is also known as the router-to-router virtual private network, and it is usually used in the enlarge organizations. If any company has many branches in different areas then use the site-to-site VPN to get interface the network of one office area to network to other department areas.

There are two different kinds of Site-to-Site virtual network like as:

Extranet based VPN: Sometimes few organizations use the Site-to-Site virtual private network to make connection with another company’s offices, and then it is known as ‘Extranet based VPN’.

A client to server VPN makes a secure connection in between the client and corporate network, and it still is getting to maintain the security and resources of the computer networking. It offers a new one VPN tunnel that lets user to get access a network without breaking the restriction of security and privacy. This VPN is especially helpful, whenever getting to access insecure public WLANs.

A P2P VPN is a service that is most suitable for peer to peer network. When it is going to search a file at the P2P network then service finds the copies of a file and establishes a connection along with sources that consist the part of otherwise the all requested file. Peer to peer network allows to instantly file sharing process, while you are trying to download it not from a single location, whereas multiple terminals have small group of same data. Therefore, whenever you download a file, then it is uploaded to many users who are getting to request for same file.

A P2P virtual network is able to protect your precious data, but it is unable to keep you secure from malicious files. As result that, P2P VPN cannot secure your devices, while you are getting to download malware masquerading like as legitimate file.

Here, we will show you many examples of Virtual Private Network that are going to use in networking for the security and privacy like as:

When to Use Them

While selecting the right VPN (Virtual Private Network) service, you should be concern many parameters like as speed, cost, bandwidth, and VPN protocols. If you have been totally understood of VPN features and your needs then selecting the optimal service in the among of countless virtual private networks can be a challenge.

If you are single user who is browser the web anonymously otherwise get access restricted webpage, then remote access VPN is the great option for you. Whereas, peer-to-peer VPN is good deal for user who get focus on only file sharing and torrenting enlarge files without getting any restrictions. But, Site-to-Site VPN is most helpful for businesses that wish to make secure communication in between offices at the different locations as geographic areas.

What is VPN and its example?

VPN stands for ‘Virtual Private Network’ that lets you to make connection to a private network over the Internet securely and privately. For example are: ExpressVPN, NordVPN, IPVanish, and etc.

What are different types of VPN in networking?

There are six types of virtual private network like as Remote Access VPN, Personal VPN, Mobile VPN, Site-to-Site VPN, Client to Server VPN, Peer-to-Peer VPN. In this post, each one is explained in detail; you can check them.

What are the types of VPN, which are supported in Azure?

There are various types of VPN like as Point-to-site VPN, Site-to-site VPN, Multi-Site VPN and ExpressRoute, these are supported by azure

What are the different types of VPN gateways?

There are two kinds of VPN gateway that is supported by VMware Engine like as Point-to-site VPN gateways and Cloud VPN.

What are the different types of VPN for Android?

There are many types of VPN which are used for Android devices like as NordVPN, Surfshark, Atlas VPN, IPVanish, Ivacy VPN, and so on.

Now i hope that you have completely learnt about different types of VPN (Virtual Private Network) and their examples; as well as showing all parameters that help to select when to use them as well. If this article is helpful for you, then please share it along with your friends, family members or relatives over social media platforms like as Facebook, Instagram, Linked In, Twitter, and more.