What is Peer to Peer Network

Definition – In the peer to peer network, all “Peers” means all computers which are linked with each other through internet. P2P network has not any central server, so each user is capable to share any types of files on any peer over this network.  On other words, you can say that every peer on this P2P N/W plays role as server as well as client. 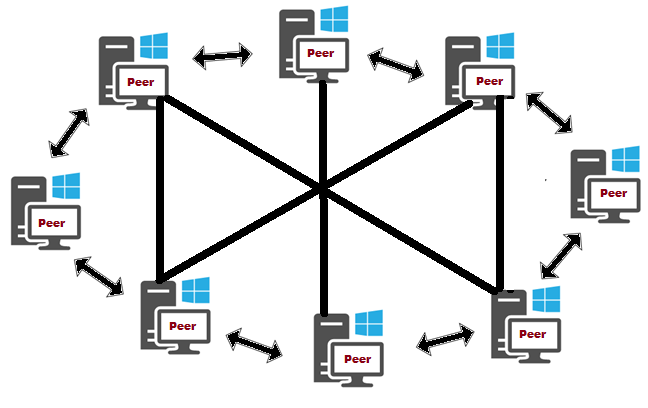 Diagram of Peer to Peer Network

Why to Use P2P Network

Due to these points, to be used peer to peer network with securely and efficiently:

How to Work Peer to Peer Network

Read More – Advantages and Disadvantages of Peer to Peer Network

When users want to download any file from internet then they need to use of web browser for opening the appropriate website over the internet. In this scenario, website plays the role as server and computer of users work as client for receiving the all files. This model performs their tasks like as one-way road where downloaded data is moved from point 1 (website), to point 2 (user’s PC system).

In the case of peer to peer network, if users want to download same data through P2P N/W, then downloading task is controlled in different manner. Users have to need peer to peer program for installing on their PCs, which help to generate virtual network of P2P application users. Then when the user downloads a file, it is received in bits that come from various computers in the network that already have that file.

Peer to peer architecture is designed with using of single software program where every piece of program performs their all tasks as both client and server along with similar responsibilities and capabilities.

Applications of Peer to Peer Architecture

There are various areas where to use P2P network, such as –

Types of Peer to Peer Network

Read More – What is Client Server Network? With Examples

In this section, we will discuss about different types of Peer to Peer (P2P) network, below explain each one:

Example – “Gnutella Protocol” that protocol is capable to find and locate all files over that network.

In this network, to connect every devices of network with each other is easy task. All devices have to make same contribution, but due to lack of structure, users can face some difficulties for searching rare content. Its churn rate has higher, churn rare means how many users are joining and releasing of the network.

Hybrid peer-to-peer Network plays the role like as client-server network because it contains one centralized peer that perform all activities as server such as to keep all information on the peers and send the responds to requests for that information. Centralized peer aware that which types of resources are share able and which are free. They take all responsibility for getting to host management of all available resources.

Examples of Peer to Peer Network

Napster – Nepster was introduced by American college student Shawn Fanning, in 1999. It used for file sharing service over the internet, and music could be store on your PCs. But it was shut down in 2001.

Bit Torrent – Bit Torrent is an communication protocol that is used for peer to peer file sharing, and it helps to distribute data and all fires on the internet into decentralized fashion. Main objective of using of this protocol is to transfer enlarge files like as video files enabling with TV shows and other video clips, all digital audio file such as songs.

Skype – Skype is an P2P VoIP client that is designed by organization that created Kazaa. With the help of it, all users can make voice call and sent text messages to another user but they must be persisted on the Skype client.

Bitcoin – Bitcoin also uses the peer-to-peer payment network, and in which cryptographic protocol is used  for operating that helps to users for sending and receiving bitcoins.

Gnutella – Gnutella is a peer to peer network that is used for file sharing over the network, it lets users to send and obtain all data on the internet.

Kazaa – Kazaa was peer to peer file sharing application that was enabled with FastTrack protocol licensed by Joltid LTD, and it was operated by Sharman Networks. Its main goal was to transfer MP3 music files as well as other types of files like as video and text over the internet.

Limewire – Limewire had used for peer to peer file sharing in free of cost for different types of operating systems like as Windows, OS X, Linux and Solaris. LimeWire implemented gnutella network along with BitTorrent protocol.

BearShare – BearShare was introduced by Free Peers, Inc for Microsoft Windows, and then it revised edition of iMesh by MusicLAb. BearShare was an application that is also used for peer to peer file sharing.

Morpheus – Morpheus also used for file sharing and finding peer to peer client to Microsoft Windows, and it was designed and distributed by StreamCast organzation.