In this blog post, we are going to explain about what is middleware architecture and its types, examples, uses and applications, as well as involving their advantages and disadvantages of middleware with ease.

Middleware is also known as plumbing because it’s both sides are connected with different applications, and it helps to transfer data in both side.

Middleware was developed in 1980s for making linking with new designed applications to older legacy systems. Now, it is used in various areas such as web servers, application servers, content management systems, and other tools which help to design applications and delivery. Middleware delivers API (Application Programming Interface) for underlying O/S features. 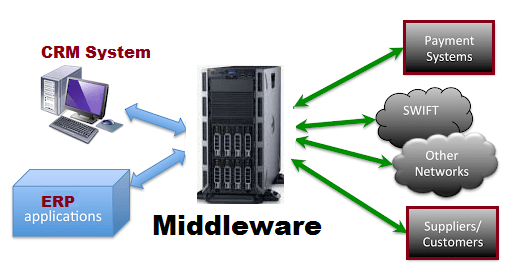 Middleware helps to provide better environment for developer to design several applications with more efficiently, and it performs all activities as connective tissue in between all users, data, and applications.

In this architecture, to make interaction with back end data from several network based requests, and this data may be into various form like as simple picture for showing, streaming video for playing motion, and it might be complex data such as million transactions of banking sectors. 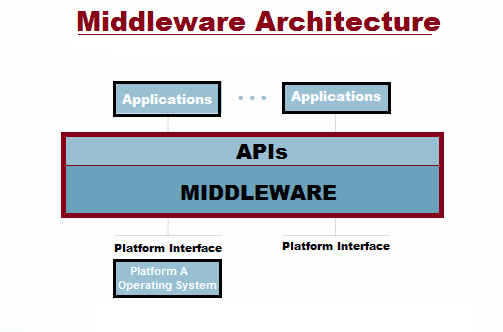 This data that is requested can take on several format and it might be hold in different variant of methods, like as file server push that data and received from message queue otherwise stored into database. Main objective of middleware’s architecture allows accessing all back end resources with easier way. Middleware programs help to deliver messaging service for different applications to send all types of data, like as simple object access protocol (SOAP), representational state transfer (REST) or JavaScript object notation (JSON).

There are different types of middlewares, below explain each one:

Remote Procedure Call is traditional middleware that was introduced in 1970s because it works as client/server principle. In which, one client machine can fire any requests a service from program that is situated in other computer machine over the network without any getting knowledge of network. RCP middleware works as point to point communication so it is not scalable and it consume huge amount of resources while it’s processing.

It contains more issues such as degrade performance and high complexity.

It is also known as “Object Request Broker (ORB)“, and its main goal is to handle all communication in between all objects in distributed computing system. Object middleware helps to make program form one computer machine to another computer system via computer network, as well as allowing all requests and objects to be transferred with using of object-oriented system.

Web related applications server helps to produce better interfaces for using of different types of applications are implemented like as middleware in between browser and other system. Browsers are used on your PCs, laptops or notebooks while traveling.  App servers allow supporting all huge range of server side processing.

This middleware helps to send and receive all messages over different types of distributed applications. It allows less complication for using of all applications move on several types of platforms, and it is also more comfortable to work across all types of operating system as well as N/W protocols. Main example of message oriented middleware is an Email system.

It refers to enterprise portal server, but it plays all roles like as a middleware because it is enabled with smooth front end integration.

The prime objective of this portal is to get interaction in between client devices and back end systems.

This middleware helps to make communication and integration services along with interface of software, and it plays role like as liaison in between real time operating system and embedded applications.

Application Programming Interface is bunch of tools and protocols which help to design various applications, and it allows other applications and services to make communication along with primary application and services, without getting to know about both side implementations.

This middleware is designed for developers those want to extract small piece of content without getting to aware that how to obtain all content by system.

Here, we will discuss few types of middleware examples, like as:

Game engine middleware is more helpful for game developers with accessing to different kinds of tools which help to make game process easier. For examples are game scripting, physics simulations, and graphics rendering.

This middleware helps to deliver group of tools which are implemented to develop various applications, and they can be run in particular hardware environment.

This middleware helps to deliver better integration framework, and with the help of it various operations, executions and runtime services can be determined and handled from various apps.

This type of middleware delivers better flexibility and security to all functions of electronic transactions.

There are many areas where middleware technologies are used; below shown all in detail:

Applications of Middleware Are:

There are two applications of middleware where to use it, such as:

Enterprise middleware allows making connection in between software components otherwise enterprise applications. It works like as software’s layer that is placed in between operating system and other applications either edge of computer network, distributed business software Apps.

It is amazing and more powerful middleware technology that is introduced by Red Hat software. This platform contains solid architectural foundation, and it needs lesser memory as well as fastest startup times.

This enterprise platform delivers better integration along with DevOps tools like as Jenkins and Maven, and it also offers cloud compatible solution for those clients who want to make their enterprises more active. Its customer support services also much better.

This is ultra performance middleware platform along with plethora’s features, and its configuration is very simple.

IBM WebSphere is more suitable for local, cloud and hybrid based solutions. This platform can be scale up easily as per requirement. The biggest benefit of this platform is that its integration can be done quickly along with another IBM cloud based products like as Watson artificial intelligence and dashDB SQL database service.

This middleware solution is getting more popularity because all applications can be deployed on this platform solution with easy and hassle free, and its operational cost is lesser.

Oracle WebLogic solution also delivers quick and simple integration along with other Oracle products like as Oracle database and its applications.

There are few benefits of middleware in different areas, such as:

Here, few limitations of middleware, below mention each one:

What is middleware technology with example?

A middleware is a special program that works as bridge in between an application and operating system. For examples are Game Engines, Device Middleware, Integration Middleware, and more.

Why is middleware used?

A middleware allows to developer for building applications with more effectively, and it also works as mediator in between application, data, and users. Middleware also helps to make multi-cloud and containerized environment along with cost-effective to design and operate application at scale.

What is middleware and how does it work?

In this blog post, we already explained about middleware with their working in detain; you can check it.

What is middleware architecture?

What do you mean by middleware in distributed system?

A middleware is perfect infrastructure that can support the development and execution of distributed applications to get enable the several components of distributed system to make communication and handle data, and it also offers a buffer zone in between the applications and network.

What are the functions of middleware?

What is the difference between middleware and API?

API represents to callable services, but whereas middleware represent a product that id integrated into integration ecosystem.

What are middleware examples?

What is middleware in web application?

A middleware lets developers to make web applications being most efficiently, because middleware is able to manage different types of services like as Data management, application services, messaging, authentication, and API management.

What is middleware in cloud computing examples?

A middleware technology is also used to make communication service in between cloud based middleware like as Web servers, application servers and databases.

What are the 6 different types of middleware in distributed computing?

What is middleware used for?

Middleware is special program that works as bridge in between operating system and applications, and middleware is enabled with communication and data management for distributed applications.

Through this article, you are completed educated about what is middleware architecture and its types, examples, uses and applications, as well as involving their advantages and disadvantages of middleware with ease.