Meaning – CPU stands for “Central Processing Unit“, and it also known as the “Processor” and “Brain” of computer system.

CPU is placed on its compatible CPU socket, which is embedded on the motherboard. CPU generates more heat while processing data, so it is connected with heat sink which helps to keep cool.

CPU plays vital role for performing great performance in computer system, and it helps in running all devices of system. CPU controls the all instructions, which are received from the system’s hardware and software, process them, and finally produces the result through output devices likes as monitor and printer etc. So, we can consider that CPU (Central Processing Unit) is more important part of computer system.

In this section, we will spread light on the all different CPU’s internal hardware parts names. Describe below each one.

Internal Components of CPU (Central Processing Unit) and their Functions 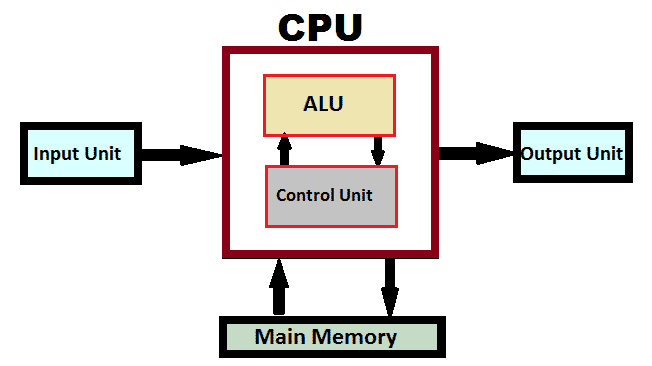 Memory unit is the main components of CPU, because its main objective is to store all instructions, and pass them to other component of CPU (Control unit).

In the computer industries, computer memory is spited into two main categories such as primary and secondary memory. Entire performance, computing power, and execution speed of computer memory is totally depends upon its design layout and types like as (SRAM or DRAM).

After processing of all instructions by CPU, memory unit helps to store the generated output, and finally it is moved to output devices.

Control unit is a communication medium between the all input and output devices to transfer or obtaining all instructions from memory units.

Prime functions of logic unit is to perform various types of operations like as comparing, selecting, matching and merging of numerous data value.

Input unit means all input devices, which are used for inserting instructions from user side such as keyboard, mouse, touchpad and more. Every input device consists own hardware controller which are linked to CPU and, and they provide the all instructions CPU that how to use them.

Output unit means all output devices, which are produced the result in the text or graphic form after processing the entire data that are given by user. Some output devices are monitor, printer, speaker etc. CPU grabs the binary code like as 0 or 1 and converts it into appropriate format which are needed by output’s hardware.

Other CPU Components Lists are –

External Bus – It is communication medium in between the main data bus and system board.

Internal Data Bus – This type of data bus makes the connection between the all internal components of processor and motherboard. The size of internal buses are depended that how much information processor can process concurrently.

Address Lines – Address lines are designed to identify the appropriate location in the memory unit where data is presented.

Registers – Register is also known as “Accumulator”, and it works as temporary storage location where data is coming from main memory side for execution and move it for storing.

Flags – Flags are embedded into CPU, and they work as registers because they indicate the all currently running states of entire functions and other operations.

Cache – Cache is also integrated into chip, but it is fastest memory to primary memory, and it helps to increase the performance of processor.

Function and Uses of CPU

CPU is an input and output device because it receive data from memory unit for processing, and after manipulation move it to again memory unit for displaying result on the screen.

Here, we will explain different four main functions of CPU (Central Processing Unit). Describe below each one.

Uses of CPU (Processor) and its Function

After completing fetching and decoding phase, next phase execute to be performed, but it totally depend upon the CPU architecture, it means execution is done may be serially or parallel fashion.

Execution phase is completed into three steps such as done calculation along with ALU (Arithmetically Logical Unit), and then transfer data from one memory place to other place finally switch to their allotted address location.

After completing above three phases, CPU releases the finally feedback, then produced output data is moved to memory units for storing. But these memories have slow speed and cheaper to registers.C

CPU’s features are classified into various eight categories such as –

Characteristics of CPU and its Impact

CPU takes more time for receiving data from the main memory of system, so CPU’s registers reserve important data which are used in processing and further precede them to cache memory.

Today, modern CPU are developed along with multi-cores such as dual core, quad core, core i5, core i7 and i8, and those cores help to process data in parallel nature for enhancing the entire performance of computer  system, as well as to manage their workload and speed.

Each core has own cache memory, and they can make communication with its cache as needed. For example –   AMD Phenom II processors are designed with level 3 cache, and GPU core is built into AMD’s Accelerated Processing Unit (APU) for getting excellent performance in mathematically.

The performance of CPU is measured in different parameters such as GHz (Gegahertz) and MHz (Migahertz) but Hertz unit is used for measuring the frequency. CPU is capable to perform multiple tasks with using their frequency in few seconds. The frequency is measured into different parameter such as “how many times the internal clock of a processor ticks in cycles/sec”. For example – 2.5 GHz CPU can tick 2.5 billion times in every second.

Every input/output devices and memory unit need internal circuit to make communication with CPU. PCI slots are designed for communicating with PCI cards, which are placed on the motherboard. USB controllers are used for usb devices likes as mouse, keyboard, printer etc, and memory controller for main memory. The level of speed of all controllers, on which they communicate, is called as “Bandwidth” but it varies CPU to CPU. For example – Multi-core processors contain more bandwidth to single core processors.

Hyper threading is also called the HTT because it has single CPU but it acts as double processor. It is not able to chase double speed, but entire performance is enhanced as dramatically. Intel Company provides the HTT technology to boost up the performance of processor.

Virtualization technologies help to run multiple operating system at once on the server or computer system, and can be increased the speed and abilities of those systems. Intel has released Intel VT, and AMD released AMD Virtualization.

Operating system is designed with bit form like as 32 bit and 64 bit; it means some amount of data can be processed at once. So CPU architecture is also depend on the 32 bit and 64 bit, because if you use 32 bit O/S then your system can manage memory unit along with 32 bit architecture, CPU can access only 32 bit data buses.

GPU stands for “Graphical Processing Unit”, and its main objective is to gather all information and move to screen for displaying the output. So it is integrated into CPU that is placed on the motherboard.