What is Processor in Computer? Types of Processor and its Examples!!

Hello Friends!! Today,  In this blog post, we are going to explain about what is processor and its different types of processor, which are used into your computer to enhance its performance.

Definition – Processor is known as “Microprocessor“, and it likes as small type of chip that is placed in the computers and another electronics components. Processor can manage all instructions such as arithmetical, logical, input/output (I/O) and other basic instructions, which are created by hardware or operating system. Its main job role is to obtain input from input devices and then produce the accurately result on the output devices. 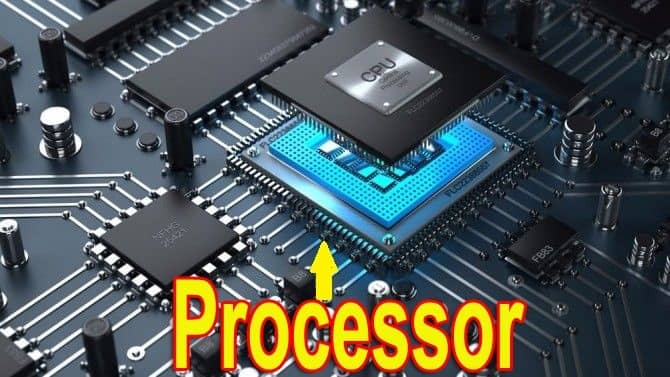 Also Read: What is CPU: Components, Parts of CPU and Their Functions!!

Now these days, more advance processors are available in the market, which are capable to control trillions of instructions in per second. Processors are used in PCs as well as they can be used into other electronic devices such as smart phones, tablets, PDA, and more. Intel and AMD are main companies, which are produced best quality processors in the market.

You can Enhance Speed of Processor

The processor’s speed is totally depending on the ability of your CPU. You can boost up the speed of processor as well as increase the processor functionality. If, your CPU is getting unlocked then you are capable to over clock, its means you can increase the frequency of your CPU instead of its standard specifications.

Here, we will discuss about different types of Computer processors, which are used in computers. Below shown each one in detail:

Single Core CPUs were used in the traditional type of computers. Those CPUs were able to perform one operation at once, so they were not comfortable to multi tasking system. These CPUs got degrade the entire performance of computer system while running multiple programs at same time duration.

In Single Core CPU, FIFO (First Come First Serve) model is used, it means that couple of operations goes to CPU for processing according to priority base, and left operations get wait until first operation completed.

Dual Core processor contains two processors, and they are linked with each other like as single IC (Integrated circuit). Every processor consist its own local cache and controller, so they are able to perform different difficult operations in quickly than single core CPU.

There are some examples which are used as dual core processors such as Intel Core Duo, the AMD X2, and the dual-core PowerPC G5.

Multi core processor is designed with using of various processing units means “Cores” on one chip, and every core of processor is able to perform their all tasks. For example, if you are doing multiple activities at a same time like as using WhatsApp and playing games then one core handles WhatsApp activities and other core manage to another works such as game.

Quad core processor is high power CPU, in which four different processors cores are combined into one processor. Every processor is capable to execute and process all instructions own level without taking support to other left processor cores. Quad core processors are able to execute massive instructions at a time without getting waiting pools. Quad core CPU help to enhance the processing power of computer system, but it performance depend on their using computing components.

Octa core processor is designed with using of multiprocessor architecture, and its design produces the higher processing speed. Octa core processor has best ability to perform multi tasking and to boost up efficiency of your CPU. These types of processors are mostly used in your smart phones.

In this section, we are going to show you complete list of Intel and AMD processors and its speed as well; below mentioned all, you can check them:

What is a processor and examples?

What processor is used for?

The processor serves the many instructions and processing power in computer to perform its many tasks. While using powerful processor in computer, you can enhance the computer’s performance.

What are the functions of processor in computer?

A processor has three main functions in your computer like as fetch, decode and execute on programmed instructions. These functions are usually presented to as the instruction cycle.

What are the 5 different types of processors in Computer?

In this blog post, we already explained different kinds of processor in detail; you can read them.

How many processors are there in a computer?

Today, mostly modern computers have dual-core central processors that are single chip along with two microprocessors on it, then both getting to share one path to memory and peripherals. If you are using gaming computer then you should be going to prefer one or two processor chip along with four cores each.

Which is the first processor in computer?

Intel® 4004 is the first processor that was used into computer.

What are the examples of processor in computer?

What is processor and its types?

You can prefer this article, then you will get perfect answer of your this query.

I hope that you have completely learnt about what is processor in computer and its different types of processor with its examples. If this article is valuable for you, then please share it along with your friends, family members or relatives over social media platforms like as Facebook, Instagram, Linked In, Twitter, and more.

Also Read: What is Microprocessor and its Types, Application, Examples, and Functions?