Motherboard Definition – Here, We will define motherboard with simple term that is used in computer.  Motherboard is also known as different names (meaning) such as “Main Board” or “Logical Board” “MB”, “Mboard”,  “Mobo”,  “Mobd”, “Backplane board”,  “Base Board”,  “Main Circuit Board”,  “Planar Board”, “System Board”. On the computer motherboard, design very thin layers of may be copper or aluminum, and it also called the “traces”. Various electronic circuits are printed on the motherboard; with using those circuits can be done communication through buses in between all components of computers. 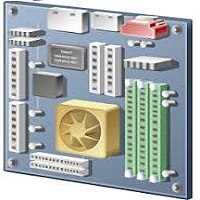 Motherboard is backbone of computer as well as also called the “HUB”.  My motherboard allows attaching all essential parts of computer such as CPU (central processing unit), memory (internal & external), sockets, ports and connectors for connecting the all input and output peripheral.

There are two different types of motherboard, and below explain each one.

Today, all motherboards are designed as integration. These types of motherboard no need external expansion card because all ports and connectors such as Serial and parallel ports, IDE, CD drive , and more are embedded on the motherboard but its repair and maintenance  is costly to non integration motherboard. There are some features like as well accessibility, fast speed, and cost effective along with their rich features.

In Motherboard form factor, measure various factors such as logical design, size, its components, and power supply connectors placement in the motherboard.

AT stands for “Advance Technology”.  AT Motherboard was tradition motherboard that was introduced by IBM Company in 80s. Those types of motherboards were size (dimensions (13.8 x 12 inch)) and shape approximate double to other using motherboards. Due to their big size, they were not able to use in small size desktop computers because in which was used 386 processors, and had big challenging task if to be install, service and upgrade in the computer due to their complicated layout.

Baby AT motherboard was getting more demands in growing computer hardware industry. Baby AT Motherboard had only one keyboard connector which was known as DIN, but if users want to connect more devices to motherboard then in which had expansion slot, and with using that could be connected more needed card while getting their extra benefits and functionalities.

Examples are Pentium-III and Pentium-IV

XT full name is “Extended Technology“. XT motherboard was developed by IBM in 1983. In XT motherboard, use traditional Logic Board.

Instead of them, if you want to use other port then you have to go market for buying Add-ON card, and insert it on the XT motherboard. Now you are able to avail extra functionalities of XT motherboard.

Flex-ATX mother board is family member of Micro ATX motherboard and it was introduce by Intel in 2000. Flex-ATX was small size so it mostly used for personal computer, but in which use latest technology. This motherboard had low cost but no more famous in computer industry.

“Balanced Technology extended” is full name of BTX.  BTX motherboard was developed by Intel in 2003 along with short out all problems over the ATX motherboard. BTX motherboard work as a low profile features, and supportable to various dimensional motherboards as well as more verities of motherboard components. But due to some problems, Intel was decided for stopping this BTX motherboard in 2006.

E-ATX is also called with full name “extended ATX Motherboard“. E-ATX motherboard is large in size but its large sizes not its disadvantage because these types of motherboard use for mainly playing games.

Here, we will spread the light on various motherboards’ parts (ports) name along with block diagram as well as its functions.

Motherboard Architecture and its Layout 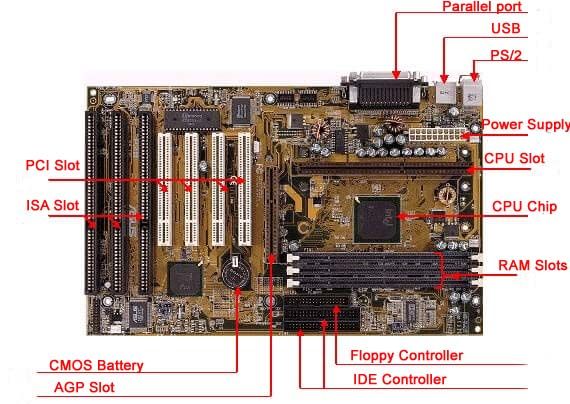 Parts of Motherboard and its Function:

Stands for “Personal System”, and it were designed by IBM in 1987. PS/2 connectors were used in traditional motherboard for various devices such as mouse and keyboard. It has 6-pin connector along with mini DIN plug.

Stands for  “Universal serial bus”. USB is designed mostly for personal computer’s devices such as keyboards, scanners, cameras, and printers. It has various verities in market along with rectangular shape. In USB, no need to restart computer after connecting the computer peripherals.

In conventional printers were used to parallel port, and parallel port is also known as “Centronics Port”. Parallel port has to use 25-pin F/M DB connector as well as use dangle for direct support dangle.  In parallel port used couples of wire, and with the help of these parallel ports can be send and receive data simultaneously.

Stands for “Central Processing Unit”, and is also known as “Microprocessor”. CPU is able to perform all activates related to logically. CPU works as “Brain of Computer“. CPU is available in market various sizes as well as numerous shapes. Need a fan or heat sink for providing cooling to CPU because they arises huge heat.

CPU socket is very important part of motherboard because main goal of CPU socket is to install the various processors on the mother board. There are some sockets like as

RAM slots are used for connecting RAM on the motherboard. RAM has various varieties in the nature of data capacities, and it measure in Bytes.

RAM has to use two slots are:

Floppy controller helps to entire control over the floppy drive. In which use the 34-pin ribbon cable that provide connection with motherboard.

Stands for “Integrated Drive Electronics”, and is also known as ATA or parallel ATA (PATA). Main objective of IDE is have to control all activities of hard drives along with 40-pin ribbon cable. There are two types like as EIDE and SCSI drives. Both controller have own different functionalities because EIDE uses for mostly personal computer, and other uses for high volume network servers.

Stands for “Peripheral component interconnect”, and it was developed by Intel. With the help of PCI, can be connected expansion board in your PC, and allows connecting extra devices such as network cards, sound cards, modems, video cards. Today, mostly use the ISA bus instead to PCI bus.

Stands for  “Complementary Metal-Oxide-Semiconductor”. CMOS contains all credential information which is stored in BIOS (Basic Input Output System) such as saved date and time. CMOS is placed on the motherboard in three different modes like as external battery, common onboard battery, and built-in battery.

Stands for  “Accelerated Graphics Port”. AGP slot mostly have to use for connecting video cards with PC. It has more accessing power to operate the graphic card.

This power supply helps to circulate the electrical power to all components of computer system, and its power has standard 110-V AC. The power supply connector uses 20 pins model. Finally, power has to change into various form like as +/-12-Volt, +/-5-Volt, and 3.3-Volt DC power.

Two types of power connectors are:

There are three types such as DIP (Dual In-Line Package), Jumper pins, and Jumper caps. DIP switch is placed on the circuit board, and it has flexibilities for turn on or off. Jumper pins uses for making the bridge to complete the circuit. Jumper caps to be used to configure the all types of expansion cards.

Heat Sink – Heat sink device uses for cooling down to hot component such as “Processor”.

Coil – The main goal of coil is to use for eliminates to power spikes and power dips.

Capacitor – Capacitors help to save the electrical energy into electric field.

RAID – Stands for “Redundant Array of Independent Disks”,  and use for enhancing the performance of storage area that use in computer disk.

Here, we will discuss about various uses of motherboard, and motherboard’s working.

There are numerous importances of motherboard as well as their advantages.