What is RAM? Uses, Examples and Types of RAM in Computer!!

Definition – Full form of RAM is “Random Access Memory” in computer industry. It is meaning of RAM that it can access all necessary data and file programs randomly from cache memory, and it is also known as “Primary Memory“, “Main Memory”, “Internal Memory”. RAM is hardware part of computer which is embedded on the motherboard. 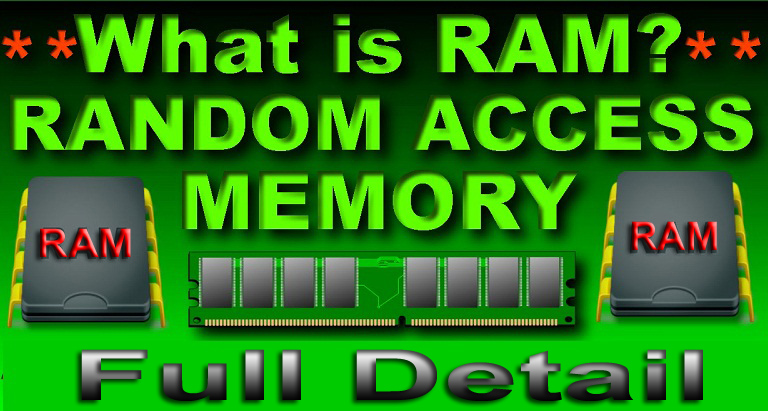 RAM is volatile nature memory, that means it is capable to store data and instructions while power turning on. When we turn on the computer system then RAM fetches all necessary data and instructions from hard disk, and stored them. CPU uses fetched data by RAM to perform the specific tasks.

What is RAM Tutorial Headlines:

Read More – What is Primary Memory and its Types!!

RAM is used to perform several activities, Such as –

Read More – What is Secondary Memory and its Types!!

There are two different types of RAM (Random Access Memory), we can say also examples them.

Definition – Static RAM is able to retain all information into static form until power supply is turn off, so due to this nature this memory is known as volatile memory. Main objective of using the static RAM is to make Cache Memory. Static Ram is more expensive as well as its power consumption more to dynamic RAM, but Static Ram has higher speed compare to dynamic RAM. In S RAM, All data has been stored in flip-flop. Flip-flop contains the every bit of this Ram. Flip-flop uses 4-6 transistors for making a memory cell and its circuit do not need to refreshment continuously.

Example – Unsaved PPT file in PowerPoint and other any unsaved data in the software.

There are various types of SRAM, such as –

Non-Volatile SRAM: Non-volatile SRAM is capable to store all information when power supply gets turn off.

Pseudo SRAM: Pseudo SRAM uses the self refresh circuit, but it is slow speed to static RAM.

Asynchronous: In which, Address transition has all control of data in and data out, and it contains the independent of clock frequency.

Synchronous: In which, all control signals, data, and address are linked with the clock signals.

Applications and of SRAM

READ MORE – What is Computer Monitor and their Types!!

Definition – DRAM is another type of semiconductor memory, and it is designed specially to store data or program files which are needed by computer processors for performing their functions.

In DRAM, several capacitors are used for storing every bit of data. This is very simple path to save data in its memory because it needs small area to store same data to SRAM as well as it is capable to store massive data than to SRAM but it requires the frequently refreshing of its circuit for its charging, so it consumes more power compare to SRAM.

There are different types of DRAM, and below explain them

Read More – What is Primary Memory and its Types!!

FPM DRAM: FPM DRAM stands for “Fast Page Mode DRAM”, and this DRAM has fast speed to other conventional DRAMs. FPM DRAM mostly used in the personal computers, but today it is not useful because it was only capable to support memory bus speed rate up to 66 MHz.

EDO DRAM: EDO DRAM stands for “Extended Data Out DRAM”, and it had great performance than FPM DRAM but its speed was same FPM DRAM like as 66 MHz.  It performs all processing on the FIFO principle “First Come First Out”. For example Intel Pentium

BEDO DRAM: BED DRAM stands for “Burst EDO DRAM”, and it provided the best performance compare to EDO DRAM. It was able to process 4 memory addresses in single burst so it could save three clock cycle processes. This task was completed with appending one on-chip address counter count the next address.

BEDO DRAM was used the page access cycle with attaching pipeline, and further it classified into two major parts such as –

SDRAM: SDRAM stands for “Synchronous Dynamic Access Memory”, and it can access any element of data within 25 to 10 nano second. SDRAM are used in the DIMM (dual in-line memory module) along with 168 contacts.

In which, all data are stored with the help of capacitors using IC’s “Integrated Circuits”, and it is inserted into its specific slot, which is embedded on the motherboard.

ADRAM: Asynchronous DRAM is basic form of the DRAM, and Asynchronous DRAM is enabling to different connections like as power, address inputs, and bidirectional data lines. It controls the timing of all memory devices with asynchronously nature, and memory controller circuit arises the useful control signals to control timing.

CDRAM: CDRAM stands for “Cache DRAM”, and it is designed specially with enabling on-chip cache memory. It works as high speed buffer to main Dynamic RAM.

SDR SDRAM: SDR SDRAM stands for “Single Data Rate synchronous DRAM”, and it can allow only one instruction and transfer one frame of data’s word on per clock cycle. It can bear clock frequency up to 100 to 133 MHz, and it performs all tasks on the 3.3 V voltages. These types of chips are designed with several data buses forms such as 4, 8, or 16 bits, and they are assembled into 168 pin DIMM package module. These chips are capable to read or write with 64 bit concurrently.

DDR SDRAM: DDR SDRAM stands for “Double Data Rate SDRAM”, and it provides the more bandwidth to all users. It is capable to accept the same commands at the once per cycle, and it can transfer double words of data with one clock cycle at a same time. Its clock rates are 133, 166 and 200 MH.

There are some family members of DDR SDRAM

DDR2 SDRAM: It is second member of DDR SDRAM family. It provides the double bus rate on per clock cycle rate, and it uses the different clock rates like as 200, 266, 333 or 400 MHz.

DDR4 SDRAM: It has great performance to DDR3 due to use its modern signal processing, and it uses fewer power consumption (1.2 V) along with huge memory capacity. Its clock rate up to 1600MHz as well as enable 288 pin configurations.

This memory package consist the eight or nine RAM chip, where eight is used in MAC and nine in the personal computer but 9th chip is reserved to parity checking. SIMM used the 32 bit bus width, and it was available in 30 or 72 pin modules.

Now these days, DIMM is used as memory modules because its performance is excellent to SIMM. In DIMM, pins are embedded on the both sides of this module. Some years ago, DIMM was supported 168 pin connectors with 64 bit data bus. But now DIMM works on the latest technology like as fourth generation double data rate (DDR4) SDRAM, and it contains the 288 pin connectors.

Some Common Types of DIMM

It is designed specially to use on desktop and laptops because its speed fast and cost effective but not stable.

These memory modules are used in large system such as servers and workstations, and it enables the error detection techniques for decreasing the soft errors and bugs.

It is also called the “Buffer” memory, because it is used in the servers and large applications, where to need the more stability and robustness.

It is used for decreasing the overload on the main memory controller along with buffering (data and address).

It has small size compare to standard DIMM because these memory modules are used small size PCs such as laptops, PDA and notebooks, etc.

This memory package is similar as a DIMM but it is known as RIMM because of their manufacture companies slot needed.

It is small version of RIMM memory module package.

RAM (Random Access Memory) has various examples where it is going to use in your real-life like as:

What is RAM and its types in Computer?

Ram stands for ‘Random Access Memory’ that is most essential element of computing process; as well as RAM is a temporary storage memory where your computer needs to keep store data it requires to retrieve instantly. Ram has two variants like as Dynamic RAM (DRAM) and Static RAM (SRAM).

What does RAM do stand for?

RAM stands for random-access memory, but what does it mean? Your system RAM is most important short term memory area where data is kept store as processor when processor requires it. Don’t get confuse! Long term memory storage on your HDD, because here your data always stays even your PC is turned off.

Why do we need RAM?

RAM offers the fastest access and temporary storage for data in your computer system. When you get turn on power of your PC then processor requests data from HDD/SSD and loads into Random Access Memory.

Can a computer work without RAM?

No! You are unable to operate your computer without using RAM because your system is not get ready to past the power-on-self-test (POST) phase.

What are two uses of RAM in computer system?

What are the 10 example of RAM in real life?

There are many examples of RAM where it is used in your daily life like as:

What are the different types of RAM in computer?

There are two different kinds of RAM in your computer like as Dynamic RAM (DRAM) and Static RAM (SRAM). Above in this post, already we have been explained both types of RAM in detail; you can read them.

I hope that through this post, we have completely learnt about what is RAM and its examples and uses; involving with different types of RAM (Random Access Memory) with ease. If this article is helpful for you, then please share it along with your friends, family members or relatives over social media platforms like as Facebook, Instagram, Linked In, Twitter, and more.