Flash Memory was introduced by Dr. Fujio Masuoka in 1980. Flash memory is also known as electronically erasable programmable read only memory (EEPROM), because in which piece of  code like as programming can be write and erased by electrically. 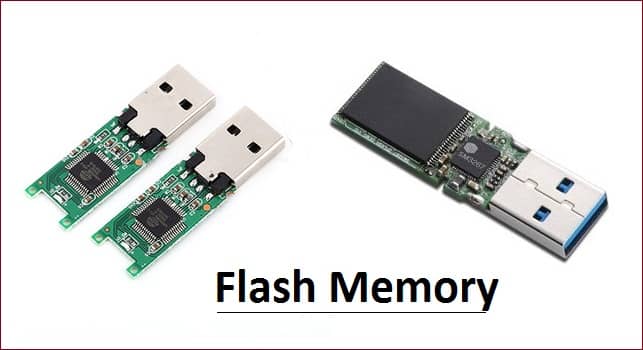 Flash Memory is divided into two types based on using technology, such as –

NOR flash memory is executed into XIP Memory, that means all programs and instructions are saved into NOR flash, and these programs are executed itself with using of NOR flash without accessing any copied data into Main Memory.

NOR flash memory has higher reading speed compare to NAND flash memory but it has not good speed to write and delete data. It is high cost effectiveness in small capacity of 1 – 4 MB.

NAND flash is best option to access much such as block devices, like as Hard Disk. If, you needs to higher data storage capacity then NAND flash memory is great selection for you. It delivers tech higher densities and enlarges capacity with affordable price. It is capable to erase, sequential writes and sequential reads with higher speed.

Four types of Flash Memory as per User Requirements, such as –

In the traditional flash storage, we used the HDD storage techniques, and this technique delivers the cost-effective capacity so due to that, users have flexibility to scale this system. Due to unreliable, several experts suggest that this storage capacity is not capable to store data more than 50%. Some Expert advises that traditional flash storage contains the best vulnerable for holding information, and they break down most often inconvenient and risky for the user.

Server Flash Memory prefers the cache storage capacity because it allows to users access data with higher speed along with lower storage capacity. But, now it is getting more popularity because its property is adding IOPS, and it grows flash memory with using functioning parallel host application, so due to this big advantage now mostly people’s first preferred selection is Server Flash Memory. It is getting more popularity than to other using flash memory because this memory permits to IT organization to improve speed of storage and decrease the latency with more efficiently.

The All Flash Array

All Flash Array contains the best consistent storage capacity. It works as the solid state storage because it allows to multiple flash memory drivers, instead of spinning the hard disk drives. All Flash Array is getting more popularity, and as per the IDC predicting it will be grew up $5 Billion by end of 2021.

There are various examples of flash memory, below explain each one –

USB Flash Drive – USB flash drive is also known as USB thumb drive, USB stick or Pen drive. It is light weight portable storage device, and it is used as “”Plug and Play. Now these days, USB flash drive is totally replaced with compact disc, because you can plug it into USB port of the computer system then USB flash drive is capable to store most important files, folders or data.

CF (Compact Flash) – Compact Flash is also a different type of flash memory, but this memory is mostly preferred in the digital cameras for holding images. It is used also other devices like as portable music players and PDA.

Compact Flash card has two variants like as “Type I” and “Type II”. Type I card is 3.3 mm thick, but other is 5 mm thick.

M.2 SSD – M.2 SSD stands for “M.2 Solid-State Drive”, and it is used in internally mounted storage expansion cards as per the computer industry specification.

Memory Card – Memory card is also known as “Flash Memory Card”,  and it is storage medium of different types of data such as images, video or text. Memory card is mostly used into several devices such as digital camcorders, handheld computers, MP3 players, printer, digital cameras and more.

MMC – MMC stands for “Multi Media Card”, and it is small type of memory card that is used as flash memory into several portable devices like as PCs, music media player, smart phones, video camcorders, car navigation, and more.

NVMe – NVMe stands for “Non-Volatile Memory Express”, and it is used as host controller interface and storage protocol for flash and next generation SSDs which provides the higher throughput and fastest response times for different types of enterprise workloads.

SDHC Card – SDHC stands for “Secure Digital High Capacity card”, and it is advance version of the SD card along with storage capacity up to 32 GB.

SmartMedia Card – It is a data storage medium device, and it contains the flash memory that helps to hold data. SmartMedia Card was introduced by the Toshiba with storage capacity from 2 MB to 128 MB, and its physical dimensions of 45mm x 37mm x .76mm.

SD Card – SD card is also known as “Secure Digital Memory Card”, and it is part of the flash memory. SD card was designed by Panasonic, Toshiba and SanDisk in 1999 for data storage in the cameras and phones.

SSD – SSD stands for “Solid-State Drive”, and it is data storage medium. SSD is a non-volatile memory to store and access any types of data. It does not contain any moving parts, so it delivers the faster access time, noiseless operation, higher reliability, and lower power consumption.

xD Picture Card – Its full form is “EXtreme Digital Picture Card”, and it is designed by FUji and Olympus, in 2002 for using in the digital cameras.

There are several benefits of flash memory, such as –

Here, we will spread light on few limitations of flash memory, such as –

What is flash memory and example?

Flash memory is also called the flash storage; and this is non-volatile memory that deletes data in units known blocks and rewrites data at byte level. There are few examples of flash memory like as USB Flash Drive, CF (Compact Flash), M.2 SSD, Memory Card, and more.

Flash Memory was introduced by Dr. Fujio Masuoka in 1980.

Why do we need flash memory?

Flash memory is a long-life as well as non-volatile memory chip that is usually going to use in embedded systems. It is able to keep store data and information, when power turned off; as well as it can be electrically erased and reprogrammed.

Why it is called flash memory?

After getting to see that how the deleting process works, Shōji Ariizumi thought it reminded him of the camera flash in photography and how quickly a scene is illuminated, so he suggested that Masuoka name the new technology “flash memory.”

What is flash memory used for?

What are uses for flash memory?

What are the different types of flash memory?

What are the examples of flash memory?

Is RAM an example of flash memory?

There are many devices, which are going to use as flash memory like as digital cameras, smartphones, USB drives, memory cards, and MP3 players.

Now i hope that, you have been completed educated about what is flash memory and its examples, types and uses; with involving flash memory devices with ease. If this article is valuable for you, then please share it along with your friends, family members or relatives over social media platforms like as Facebook, Instagram, Linked In, Twitter, and more.