What is Magnetic Storage? 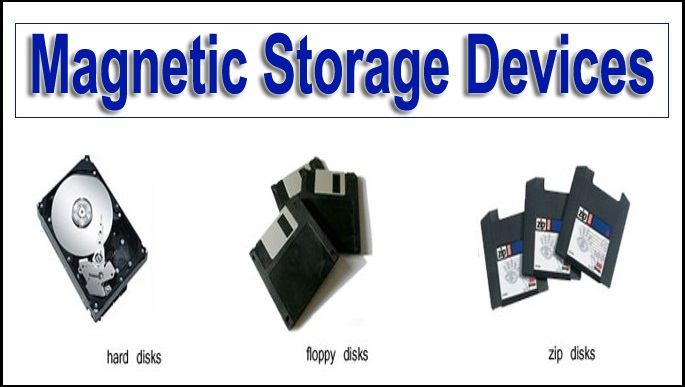 Here, we will discuss about many examples of magnetic storage devices (media). Below explained each one-

There are different types of magnetic storage medium (device); below mentioned all:

Hard drive is also known as the “Hard Disk Drive”. Hard drive is a storage area, where are stored your all data (Files and Folders) in magnetic form with physically. It is capable to store data more than 200 GB. Hard drive contains the stack of disks which are mounted internally with solid encasement, and all data is stored on that disk. These disks move very higher speed (5500 to 7500 RPM), so any data can be retrieved immediately from any area on the hard drive. In Hard Drive, All data does not discard after getting to discontinue power supply

Floppy disk was introduced by IBM, in 1969. Floppy disk is also called the “Floppy Diskette”. It is a hardware data storage medium that is used in the personal computers. Floppy disk is a plastic cartridge measuring 3.5 inches square and about 2 millimeters thick, and it is secured with protective casing. In the floppy disk, iron oxide was used to coat internally for storing data in magnetic form, just similar to hard disk. But, now floppy disk is completely obsolete.

Magnetic Tape was introduced by Fritz Pfleumer in 1928, and primary objective of magnetic tap of using was recording voice. It is traditional technology, but now it is replaced by CD and DVD.

Magnetic drum was developed by Gustav Tauschek in 1932 in Austria. Magnetic drum was used as a primary memory in computers, in 1950 to 1960. But, now it is replaced with secondary storage medium. It contains the metal cylinder which is coated with magnetic iron-oxide material on which all data (files or folders) can be saved.

Magnetic drum is not physically removable device, because it is permanently placed in the computer. It is capable to access data at higher rate compare to tape or disk storage devices but its storage capacity is lesser to them.

Zip diskette was developed by Lomega Company, and it was an advance technology to tradition floppy disk, and it was used as a secondary storage device. Zip drive is used to operate the Zip disk. Zip disks had 100 and 250 MB storage space that was used to save, share and back up huge amount of data. But,  now Zip disk is not getting popular in the market.

SuperDisk is introduced by Imation organization that is supported with enlarge high density. SuperDisk drive was getting more popularity along with OEM computers, like as  Compaq and Packard Bell PCs. SuperDisk has capable of 120 MB storage over single disk similar size of oldest 1.44 MB floppy diskette, and further few time it was capable of storage 240 MB.

MRAM stands for “Magnetoresestive Random Access Memory”. In this technology, magnetic states are used for storing data beyond of electrical charges.

What are magnetic storage devices in computer?

Magnetic storage devices always use the magnetization process to write, rewrite, and get access data; they is getting to cover with a magnetic coating and keeps store data into tracks format, spots and sectors.

What is the definition of magnetic storage devices and its types?

Magnetic storage devices keep store the data with using magnetized medium, and those types of data saved in that medium in the binary form like as 0 and 1. Its types are magnetic tape, floppy disks and hard-disk drives.

What are the 10 examples of magnetic storage devices?

What are the different types of magnetic storage devices?

Through this article, already we have been explained about different kinds of magnetic storage devices in detail; you can check them.

Now, i can hope that through this article; you have been fully learnt about what are magnetic storage devices and its examples and types; involving with advantages and disadvantages of magnetic storage devices with ease. If this article is helpful for you, then please share it along with your friends, family members or relatives over social media platforms like as Facebook, Instagram, Linked In, Twitter, and more.