Hi Learner! In this post, we will explain you all possible things about what are storage devices and its examples, functions, and uses; involving with types of storage devices with ease. This is unique article over the internet; so make ensure that after reading this blog post; you will definitely fully aware about storage devices with examples without getting any issue.

What are Storage Devices? 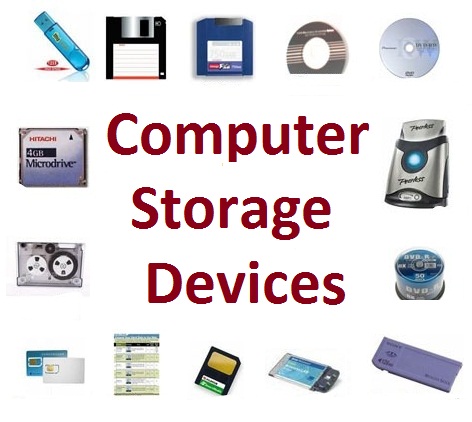 All data are stored in computer storage device in the digital form such as binary form like as 0 and 1. Users can retrieves of saved instruction or information anytime when they are needed. 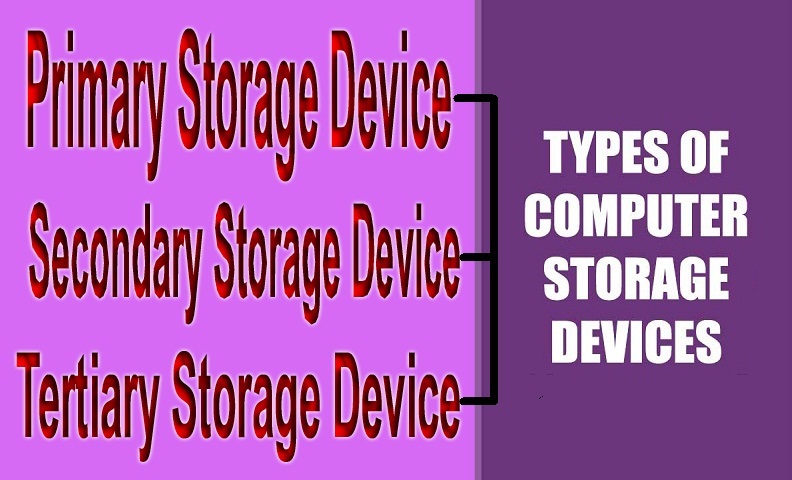 Primary storage is also known as “Main Storage“, “Main Memory” or “Internal Memory” as well as they play major role for storing data and applications as a temporarily basis while the computer is running mode, because these storage devices are capable to access all data directly from CPU with the help of various data buses. These devices have limited capacity for data storage compare to secondary storage devices.

Examples of Primary Storage Device with their Functions and Uses

There are four examples of primary storage devices; below explain each one –

Register Memory: Computer is enabled with various “Bits”, and these bits are known as the “Register Memory“. The register memory is very smallest unit of the primary storage devices. It is able to store 32 to 64 Bits that is enough for performing their regular tasks on the computer system. These are much fastest storage device to other storage mediums.

RAM (Random Access Memory): RAM stands for “Random Access Memory“, and it is capable to access any data randomly any time as well as from any location to computer. This is volatile storage device means to temporary memory in nature, because entire data goes delete while computer get turn off mode. RAM regains all data from CPU in run-time and sends to control unit, and it is a fastest memory to hard disk.

ROM (Read Only Memory): ROM stands for “Read Only Memory”, and it is non-volatile memory in nature, that means it is able to store data in permanently while getting to turn off power. ROM is programmable chip because in which stored all instructions that are most required when to start computer. This computer starting process is known as “Bootstrap”. Examples of Secondary Storage Devices with their Functions and Uses

Secondary storage devices are used in computer either internally or externally. Secondary Storage devices have four examples; below explain each one.

Magnetic Storage Devices: In the Magnetic storage devices, all data are stored with using magnetized medium, and these types of data saved in that medium in the binary form like as 0 and 1. This magnetic storage has also non-volatile storage nature.

There are different types of devices, which are used as Magnetic Storage; like as –

Optical Storage Devices: In the optical storage devices, all read and write activities are performed by light. All recording information stores at an optical disk. As per the opinions of data scientist that compact space is most useful for huge data storage. Their big advantages are not more costly, light weight, and easy to transport because it is removable device unlike hard drive.

There are different types of devices, which are used as optical storage; like as –

Flash Memory Devices: Flash Memory was introduced by Dr. Fujio Masuoka in 1980. Flash memory is also known as electronically erasable programmable read only memory (EEPROM), because in which piece of  code like as programming can be write and erased by electrically.

There are different types of devices, which are used as flash memory; like as –

Online Cloud System: Clouding is systematically model for storing data in computer, and in which entire data are stored in logically nature. Those clouding system are managed by other hosting companies. With the help of online clouding, all data can be access by couples of users anytime and anywhere. Big advantages are not place limitation as well as no need carry any storage device.

Tertiary storage offers the third phase of storage medium. It enables with robotic mechanism that will help to insert and remove massive storage media into storage device as per the system’s need.

Tertiary storage systems are typically of object storage type so every logical record can be fetched individually.

Tertiary storage is used to move media in between their long-term storage locations and available drives without human intervention.

There are many examples of storage devices, which are going to use keep store data as permanently that means your stored data never lost when power turned off.

What is storage device in computer?

A storage device is a internal or external computer hardware component that allow to keep store data and information to get process the output of any computational work.

What is a storage device meaning?

Storage device is a computer hardware component that helps to store, porting or retrieving data files and objects. Storage devices are capable to store information in both natures like as temporarily and permanently.

Why do we need storage devices?

You have to need the storage devices to get back up or archive your essential data as permanently that doesn’t get corrupted lost or destroyed easily.

What is the main function of storage device in computer?

The primary function of storage device of computer is to keep store, port or extract data file and objects; and storage devices are able to hold and store all information both temporarily and permanently nature.

What are the 10 uses of storage device?

Through this article, already we have been explained various uses of different kinds of storage devices; you can check them.

What are the different types of storage devices of computer?

What are 10 examples of storage devices?

There are many examples of storage devices like as:

What are the examples of the different types of storage devices?

In this post, we have been explored clearly various examples of all types of storage devices separately; you can check them.

Through this article, you have been completed educated about what are storage devices and its examples, functions, and uses; involving with types of storage devices with ease. If this article is giving value you, then please share it along with your friends, family members or relatives over social media platforms like as Facebook, Instagram, Linked In, Twitter, and more.