Primary memory is the internal memory of computer that is made up by electronic semiconductor devices. Primary memory can easily directly make communication with CPU in the computer. So, here we are going to cover about what is primary memory with its types and functions; involving with many examples of primary memory in computer with ease. Now i make ensure that at the end of this post; you will definitely fully aware about Primary Memory without getting any hassle.

What is Primary Memory of Computer?

Definition: Primary memory is also known as “Main Memory” or “Internal Memory” or “Primary Storage Device” or “Internal Storage Device” as well as they play vital role in computer, because those memories are capable to access all data directly from CPU with the help of various buses. These memories have limited capacity for storage and made by integrated circuits (IC) or semiconductor components. 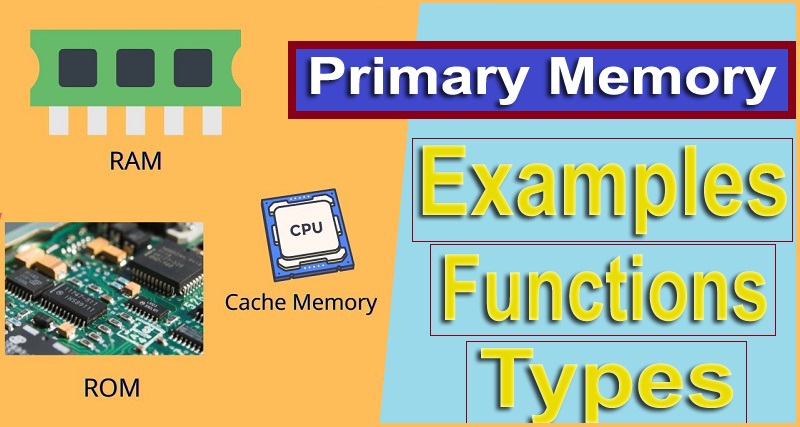 Primary memory is available in two variance such as volatile and non-volatile. Volatile memory is called temporary memory because all data deleted when power get turn off mode but its access time and response time much fine to secondary memory. Non-volatile memory is permanent memory in which nothing data erase when system is turn off.

Computer memory helps to store or saves of all important data such as songs, movies, pictures, software, and more. Those all data are saved in two different modes it can either temporary or permanent nature. All data are stored in computer memory (computer storage device) in the digital form such as binary form like as 0 and 1. Users can retrieves of saved instruction or information anytime when they are needed.

Types of Primary Memory with Examples

There are four different types of primary memory in your computer; below shown each one in detail, you can check them:

Some people also say the examples of primary memory of these kinds of main memory.

Registers are included in the CPU. They have low capacity for storing the instructions, and data only on before and after processing mode.

RAM is primary memory and RAM stands for “Random Access Memory“. Ram is capable to access any data randomly any time as well as from any location to computer. This is volatile storage memory means to temporary memory in nature, because entire data goes delete while computer get turn off mode. RAM regains all data from CPU in run-time and sends to control unit, and it is a fastest memory to hard disk.

Static RAM is also volatile primary memory, and it made by flip-flop. Static Ram works in computer as a form of Cache Memory, but it consumes more power as well as more costly to DRAM. In Static RAM uses six transistors, and each transistor use for one bit.

Dynamic RAM is other types of RAM, and volatile also in nature. In which use the capacitors for storing data in few milliseconds when power turn on. Dynamic RAM has slow speed as well as consume low power but has capable to store more data compare to SRAM. DRAM is cost effective as well.

MROM stands for “Masked ROM“.  MROM has to contain the all pre-planned programs like as piece of instructions, and cheaper as well.

PROM Stands for “Programmable Read Only Memory“. Users can store any data as per their requirement because these ROM is available in market in blank. But in which store instructions (programs) only one time because after filling programs it cannot delete.

EPROM Stands for “Erasable and Programmable“. In these types of ROM, users have power to editing (erase) the stored instruction (program) in EPROM. EPROM is erasable by ultra-violet light for some time like as 40 minutes.

EEPROM Stands for “Electrically Erasable and Programmable Read Only Memory“. In EEPROM, all activities such as programming and erasing are performed by electrically. This EEPROM is able to reprogrammed and erased in more than ten thousand time. Entire chip cannot be erased one time, only erase one byte at once.

The primary memory helps to perform many functions in your computer system; below shown each one, you can check them:

Here, we will show you many most important features and characteristics of primary memory in the computer; as follow them:

Why is primary memory so called?

The primary memory is also known as the ‘Main Memory’ that allows computer and processor gets access directly. Cause of this, it gets enhance the quality of processor in your computer.

What is primary memory and its types?

It is the internal memory of computer that is made up by electronic semiconductor devices. Primary memory can easily directly make communication with CPU in the computer. Primary memory has four different variants like as Register, Cache Memory, RAM, and ROM.

What is the purpose of primary memory?

Primary memory is the main computer memory that helps to hold data, programs and instructions that are currently in use for your computer.

How many types of primary memory in computer?

There are four types of primary memory in your computer such as Register, Cache Memory, RAM, and ROM. Each one is explained in detail above in this post; you can check them.

What are the main three functions of primary memory?

What are the 5 examples of primary memory?

The primary memory examples are:

What are the key features of primary memory in computer?

Primary memory can easily directly make communication with CPU in the computer. Hence, it enhances the quality of the processor.

In this article, we have been completely explored about what is primary memory with its types and functions; involving with many examples of primary memory with ease. If this article is fruitful for you, then please share it along with your friends, family members or relatives over social media platforms like as Facebook, Instagram, Linked In, Twitter, and more.

Also Read: What is RAM? Uses, Examples and Types of RAM in Computer!!