Hi, Learner! Today, through this article, we are going to cover all possible things about different types of mobile computing and several examples of mobile computing device without any hassle. Before reading this post, you must be known about what is Mobile Computing with their applications, advantages, and disadvantages.

Mobile Computing System mean Wireless communication and its applications are generic technology that refers to numerous devices that are supportable to access transmitted data like voice, video, and text anytime and anywhere over the wireless network infrastructure and in which to include mobile communication, mobile hardware, and mobile software and this react as human-computer interaction. Cause of these has improved the quality of our lives.

Mobile computing is a generic word that represents to those devices which let people to get access data and information from anywhere and anytime that means you haven’t any place bound.

Portable computing has to need wired communication. All users have freedom to move these devices themselves anywhere and anytime but it requires to access them to make connection them with a network line, so it is known as “Portable Computing“.

It is also called of “Mobile Computing“, so it is refers to wireless communication system. Mobile computing produces better environment that users can send any type of data from one location to other location anywhere and anytime with using of mobile computing devices without getting any physical connections.

Mobile computing devices are known as “Mobile Computer Devices” because they allow users to make connection to internet with all parts of your mobile devices. These devices are designed to be portable that means they are comfortable on your lap, pocket or palm of your hand. So users can carry those devices from one location to other location without any headache. 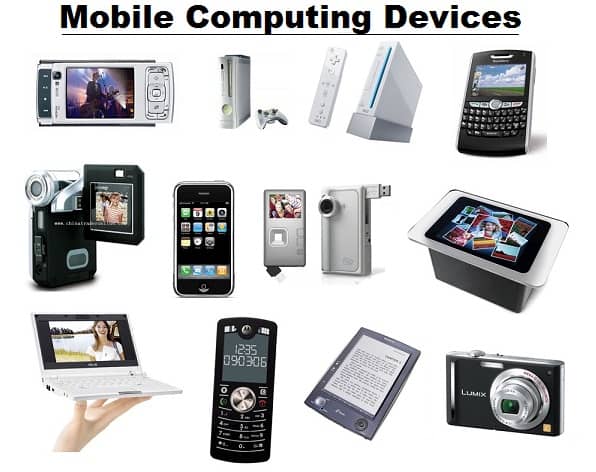 There are different types of mobile computing devices, below explain each one:

The name of PDA is Pocket computer; this device is capable to transmit data from one terminal to other terminal with synchronization. In the PDA have all functionality such as making call voice/video, calendar, and more. Today, PDAs are available in different types of operating system like as Apple iOS, Windows Mobile, Blackberry, and Google’s Android.

Smartphone connect a mobile phone and a computer in one hand to the same device. Smartphone allows users to access and store information (such as e-mails) and installs the program (apps) while being able to use a mobile phone in one device.

Notebook computers are not running and a stylus is also used to write in it, handwriting is digitized and can be converted into standard text through handwriting recognition or it is written in text form is. The stylus can also be used to type on a pen-based key layout, where letter keys are arranged differently than a standard QWERTY keyboard. These computers also have a keyboard and a mouse for input.

I Pad tablet is a tablet PC designed by Apple Inc. The iPad has a 9.7 inch touch screen that users can talk directly through the finger stroke. This portable device can be used to browse the web, listen to music, watch movies, read eBooks and play games in addition to other things.

Other Examples of Mobile Computing Devices

E-Readers: E-reader means “E-Book Reader”. It is a portable electronic device, and its main objective of designing is to read digital content like as E-book, E-newspaper etc.

Portable Gaming Devices: It is self-contained video game console along with in-built screen, speaker, mice, and game controller as well. These devices are small in size compare to home video consoles.

Netbook: Netbook is a portable mobile computing device as well as it contains light weight, less power consumption, less processing power compare to laptop. Main goal of designing is to operate word processing and internet on the web browsers.

Ultra-Mobile PCs: It is a portable hardware device that having capacity to run Windows operating system. It offers amazing functionality compare to laptop and palmtop. Its screen size is 5-7 inches and weight not exceed to 2 pounds.

Graphing Calculator: Graphing calculator is special calculator hardware device that allow displaying plotted graph for solving of complicated equation like as parabolas and another plotted output.

Pocket PCs: Pocket PCs are also known as Microsoft as a name Windows Mobile classic device that is different types of PDA which have ability to run Windows mobile operating system. It can perform some tasks as modern PCs.

PC Engine GT: PC Engine GT is also known as “TurboGrafx-16” that is portable version of PC Engine, and it was introduced by Japan, in 1990 and after that USA also released as TurboExpress.

Atari Lynx: It is 8/16 bit portable game device that was developed by Atari Lynx, in 1989.

GP32: GP32 stands for (GamePark 32). it is also portable  hardware device of video game that was released by Game Park company, in 2001.

Gizmondo: It is also handheld hardware gaming console that was designed by Tiger Telematics Company.

PlayStation Portable (PSP): It is also slim gaming console that is released by Sony Computer Entertainment.

N-Gage: N-Gage was a Symbian Smartphone as well as combining features of handheld gaming system that was introduced by Nokia, in 2002.

There are few operating systems which are used in the different types of mobile computing devices, such as:

What are the different types of mobile computing system?

How many types of mobile computing devices there are?

There are various kinds of mobile computing devices like as:

What are the examples of mobile computing devices in real life?

Through this article, already we have been explored about many examples of mobile computing device in your daily life; you can read them.

What is the best example of mobile computing?

Now, i make ensure that you have completely educated about different types of mobile computing and several examples of mobile computing device with ease. If this post is helpful for you, then please share it along with your friends, family members or relatives over social media platforms like as Facebook, Instagram, Linked In, Twitter, and more.