In this blog post, we are going to explain about 15 Advantages and Disadvantages of Flash Memory incorporated in your device and Drawbacks & Benefits of Flash Memory. And, you will also get to know about pros and cons of using Flash memory cards as well. 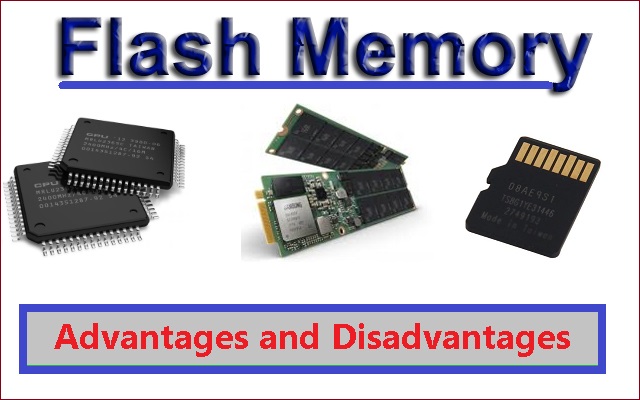 Flash memory is a kind of erasable read-only memory (EEPROM) that having ability to erase and rewrites data in chunk as fastest and energy-efficient access and rewriting. Flash memory is non-volatile nature that means it is able to keep hold data without using of power. On the principle of addressing read/write data, and flash memory has two variants NAND flash memory and NOR flash memory.

Flash Memory was introduced by Dr. Fujio Masuoka in 1980. Flash memory also uses for the storing data to computers as well as electronic devices such as USB flash drives, MP3 players, digital cameras and solid-state drives.

Higher Speed than other Storage Memory

Flash memory devices are better scratch-proof, compare to floppy disks and CDs; so they are not easily to get damage by electromagnets. Therefore, they don’t get rely on moving parts and beyond are supported by several devices like as PlayStations, mobile gadgets and other gaming consoles.

Portability is a greatest advantage of flash memory because modern flash storage devices are capable to keep many gigabytes of data and upwards of 64GB at the higher-end models. They are designed not only for transferring files, as well as using to keep store as portable versions of usually used programs like as instant messaging clients, browsers, and graphics editing software and productivity suites. When you deleted the drive, not personal data or information is remained behind.

Over the last 75 years, hard disk drives are frequently getting to enhance in terms of reliability. But, still flash memories’ performance is outranked to them. They have very less moving parts and reliability of flash memories gets it preferred to be utilized in to mobile devices.

We have been in the position whereas we have taken backup information along with a flash memory devices like as Wi-Fi gets drop and renders cloud backup not get accessible. To get store data into cloud is also much susceptible to being accessed by hackers, and along with flash memory devices your all information is on your personal and is far much unlikely to be stolen.

Best Compatibility with Other Devices

While using the USB interface, you can easily to connect flash drives to nearby any devices. If you have any PC, laptop, netbook then you can easily to find it has ports for USB drive to let you to plug in these devices without any hassle. This is best option compare to SD memory cards, because many computers haven’t any slots that allow getting access your SD memory cards.

Flash memories are mostly more costly compare to traditional hard disk drives that is depended cost per gigabytes. Hence, hard disc drives are very cheap price to manufacture, and has been longer time. So, mostly business those are getting less budgets suggest to HDDs over other kinds of flash memories.

As you known about flash memories that are more durable nature compare to traditional hard disc drive, therefore it haven’t get infinite lifetime. They gradually get degrade upon applying higher voltages across transistors. Mostly, flash memories are not able to wear get down until completing minimum 10000 rewrites.

Especially, flash memories those are memory cards are getting prone to physical lost. They are easily getting to smash or damage. Over the sometimes electronic interruption can get the card unreadable. So, this problem can be deal to SSDs too. Hence, these flash memories can be easily physically damaged if you are not getting properly handling.

As much known that flash memories devices can provide more protection from cyber-attacks, therefore they can still easily get malware from other different systems they are moved in between in those local data sharing scenarios.

Another demerit of flash memories is that it gets rewrites data in block units. Whenever, it is going to precede it one by one for every bytes then it can take consuming longer amount of time. Cause of this updating time has been cut down significantly. Therefore, this process is not getting ensured that every block can be updated certainly.

Mostly NAND flash drives are getting to use a process as known as ‘Program/Erase’ to keep store data, and the huge number of fresh writes are decreased, so this process usually gets wear and tear down the flash drives. As a finally result of flash memories are unable to keep hold up massive write loads.

What are the advantages of flash memory over hard disk storage?

Enhanced durability, higher portability, best storage ability, compatibility for other devices, and can be used flash drives as promotional materials.

What is the advantage of flash memory over the other kinds of ROM?

Flash memory keeps storing all data without any using of moving physical parts, so it has to need less energy to execute its operation compare to traditional systems. Flash memory is also able to save data as more compactly to hard disk drive.

What are the advantages of flash memory cards?

Already we have been explored above in this article many pros of flash memory, you can check them.

What are the disadvantages of flash memory cards?

Keep reading this blog post! Then you will get answer of your query.

What are the advantages and disadvantages of a memory stick?

Pros of flash memory stick are:

Cons of flash memory stick are:

Explain Advantages of Flash Memory over SRAM and DRAM

The main advantage of flash memory is that it is non-volatile. But SRAM and DRAM get lose the all data while getting turn off power. And DRAM gets lose it in each read operation, therefore flash storage is useful, but it is less speed nature.

In this blog post, we have been explained all possible stuffs about advantages and disadvantages of Flash Memory | pros and cons of Flash memory cards with ease. If this article is helpful for you, then please share it along with your friends, family members or relatives over social media platforms like as Facebook, Instagram, Linked In, Twitter, and more.