Computer system is most imaginary machine that manages the many different types of instructions which are given by user; finally produce the accurate output for user. Computer is able to perform all types of simple and complex operations.

In this section, we will explain all basic functions of computer system; like as – 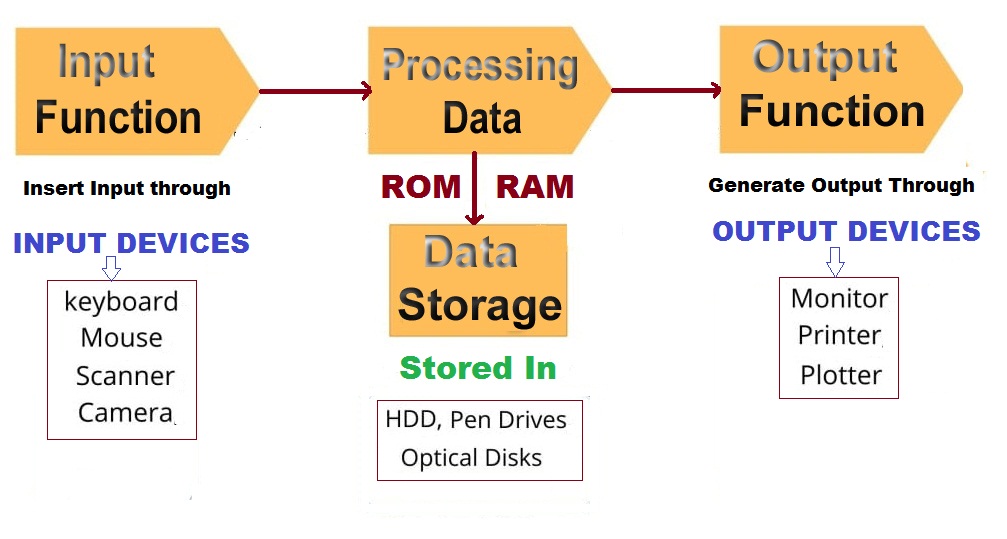 Input Data: Data input is the primary function of the computer system, and it allows user to move data or information into computer through input devices like as mouse, keyboard, scanner, Microphone, external hard drive, HDMI port, USB drive or software. Users can insert data into database, spreadsheet, online forms and more.

With using of input devices, users can input data into the system via typing any characters or words by keyboard, mouse helps to insert input by scrolling and clicking the their buttons. Application software allows to user for getting dictate which types of data is inserted. Photo editing applications are designed to input and manipulate pictures, and word processing application is used to input basic alphanumerical data.

Automated applications and robotics are used to intelligently insert data into system on their remotely stations.

Processing Data: The processing function plays the major role of the computer system unit, because this processing function helps to convert your inserted raw data into meaningful information. Central Processing Unit (CPU) provides various functionalities for getting to process of data, which are inserted by users.

CPU is also known as the “Brain” of the computer system, because it is able to perform various tasks like as manipulation of data, calculation, coding, and control all data over the entire system. All these processes are completed with helping of the several CPU’s components like as processor, power supply unit and RAM.

Storing Data: Data storing function is the 3rd step that offers the two variants of data storage like as  “Permanently and Temporarily“. Computer system has to need both data storage for performing proper functioning over the entire system.

Your computer system can get halt, due to any short circuit then RAM and ROM are not able to recover their necessary data rapidly. So, we can use some permanent storage devices (Memory Card, Hard drive, Pen Drive, CDs, DVDs, etc) for storing data as permanently that will be use in the future.

Cloud solution is better option, if users want to store data and information over the ONLINE, so it can be paid or unpaid. If you need enlarge data space then company will charge.

Output or Retrieving Data: The fourth function of computer is the output data, it means result is generated by computer system after processing of CPU is done, according to the input feed by the users. The result of system is in the different forms like as documents, videos, audio, graphs, images, and more that user can view on the output devices like as monitor, printer, speakers, headphones, screen projector, and so on.

The process of transfer data in between the computer system and their internal and external components of system is known as the I/O process that is completed by I/O devices.