UNIX Architecture Diagram with Components and Its Functions!!

Unix, trademarked as UNIX. UNIX is a multitasking, multiuser operating system for servers, desktops and laptops that are developed for flexibility and adaptability. UNIX system have a file system that is containing is a hierarchical structure of files and directories where user are able to keep store and access information with helping of files. 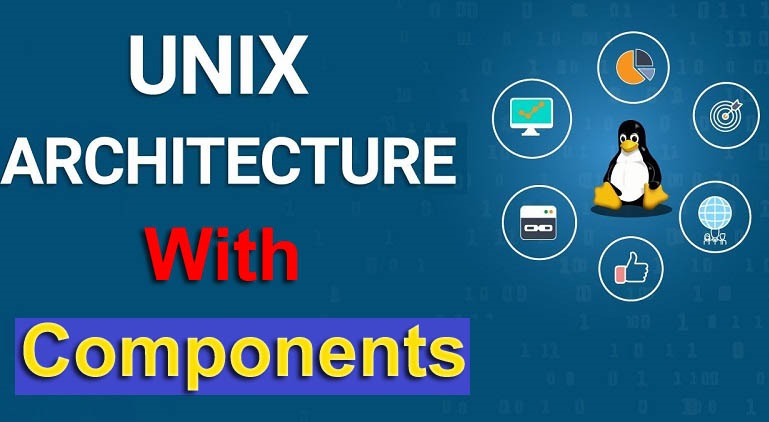 UNIX OS also contains a graphical user interface (GUI) like as Microsoft Windows that offers a user-friendly interface. Whenever, knowledge of UNIX is needed for operations which are not accepted by a graphical interface, otherwise when there is no Windows interface present, for instance telnet session.

Multiple people are able to use UNIX system at a same time, it is known as multiple systems.

One user can also execute many programs at the same time, because UNIX offers a multitasking environment. 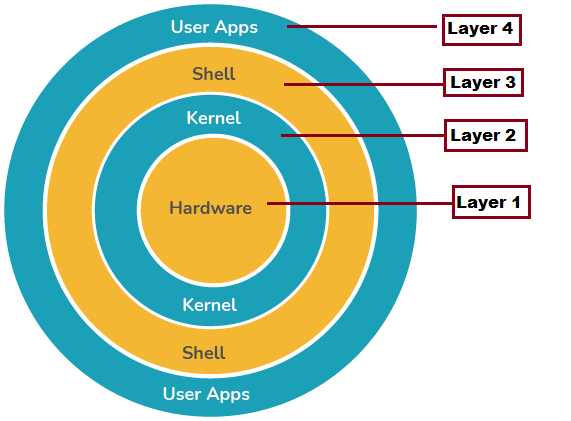 The Kernel is the heart of operating system; it is relatively small piece of code that executes frequently from system start up until it gets shutdown. 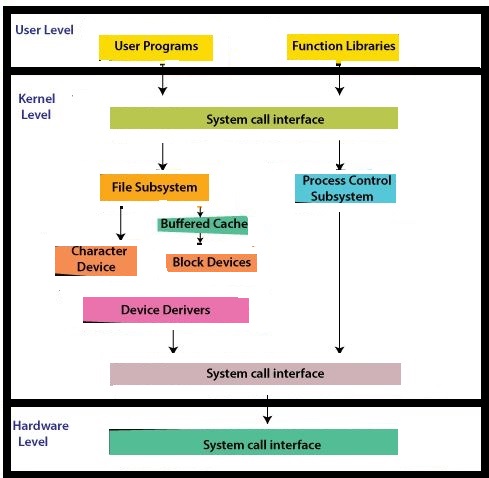 The Kernel is central component of operating system that makes communication directly with hardware of computer.  Kernel also runs as a device manager and done many valuable functions for processes that need to access to peripheral devices which are linked to the computer. Kernel helps to control these devices via device drivers.

Kernel also lets to handle the memory and processed are executed all programs that have being human or system who initiate their execution. This system should offer all processes along with access to a sufficient amount of memory then some processes need a lot of it. With helping of this, it uses of main memory and allocate an enough amount of memory to each process. Kernel also uses several techniques such as swapping, paging and virtual memory storage.

The shell is also known as ‘Command Interpreter’. Shell is a piece of software program that performs as a middle interface in between the kernel and user. It is able to read the commands and translate them and sends a request to get execution a program.

The shell has more than 100 system calls and system calls tell the kernel to get carry out several tasks for program like as:

There are different types of shell available; below shown few important types:

Bourne Shell (sh): This is initial and most common shell on UNIX. This was introduced by Stephen Bourne at AT&T Bell Labs. This is unable to support background jobs.

Korn Shell (ksh): This was designed by David Korn at AT&T Bell Labs. It is created on Bourne shell and incorporates features of C shell. It has a free version named as public-domain Korn shell (pdksh).

C Shell (csh): It is known as C shell because its usage and syntax most similar to C language. Its free version is available named tcsh under Linux. It was introduced by Bill Joy at UCB.

Bourne-Again Shell (bash): It is also free of cost shell, and designed by B Fox and C Ramey at Free Software Foundation.

Hardware can be defined as your computer system hardware parts which are able touch by human like as keyboard, monitors, mouse, speakers, clocks, timers, devices, parts etc.

This layer of UNIX architecture is enabled with shell programming language, user-written application and libraries of UNIX.

Directories: UNIX contains the directories with name, path, files, and folder. Files and folders must be same, and these are kept into up-side-down hierarchical tree structure. It’s working flow as follows:

Files: All files are organized into UNIX as an inverted tree-like structure, in which all files are saved is represented as a file system. File system could be distributed or locally. Local file system keeps storing and managing their data on device directly connected to system. Distributed file systems lets a user to get access file stored on remote system that can be retrieved by network.

What are the 4 layers in UNIX architecture?

UNIX architecture has four layers such as Layer 1 (Hardware), Layer 2 (Kernel), Layer 3 (Shell) and Layer 4 (Application Programs/ Libraries). Each one is explained above this article, you can read them.

What is UNIX explain about it with diagram?

You can read my article is careful then you will get answer in detail of this question.

What is a shell in OS architecture?

The shell is outermost layer of this UNIX operating system. Shells enable a programming language that lets to control processed and files.

What is shell and its types?

The shell is a user-friendly environment, where you are able to execute commands, programs and shell scripts. A shell has near about 100 variants but four is most usable types like as Bourne Shell (sh), Korn Shell (ksh), C Shell (csh), Bourne-Again Shell (bash), so on.

What is the structure of UNIX operating system?

UNIX OS structure is designed with using four main layers like as kernel, shell, hardware, and user commands and applications. We already explored them above in post, you may be proceeding.

What are the major components of UNIX kernel?