What is ROM (Read Only Memory)? Types and Examples of ROM!

Hi learner, today we will explain in detail about what is ROM and its types; and involving with examples of ROM (Read Only Memory) with ease. This is unique article on the internet, so i hope that at the end of this blog post; you will definitely fully educated about What is ROM and its examples without any hassle.

ROM means “Read Only Memory”. This memory is able to store data in permanently means, and it is non-volatile memory that means its data never destroy when power get turn off. It is programmable chip because in which stored all instructions that are most required when to start computer. This process is known as “Bootstrap”. 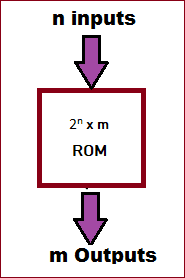 Number of bits per word = Number of output lines, m

Why to Need ROM in Computer

ROM is very useful device for automation system because it is capable to store data as per the need of system, and after inserting data, user can not delete or modify. So, we can say that it is permanent as well as protective data storage component. Due to this nature, ROM is not only used for Computer system. Rom chips are used also other electronics items such as washing machine, microwave and more.

If, any mistake is done during the manufacture process of ROM, then ROM can get unusable. It is very expensive stage of ROM manufacture, so it is creating the template. If a template is readily available, duplicating the ROM chip is very easy and affordable.

There are different types of ROM, and here we will explain each one –

MROM stands for “Masked Read Only Memory“, and it is very first ROM was hard-wire devices. Masked ROMs consist pre-planned program of data otherwise instructions and it is cheaper as well.

These types of chips have a software mask which is burned on the chip, when it is designed cycle of semiconductor manufacturing process.

Applications of Mask Read Only Memory

PROM stands for “Programmable Read Only Memory“. On this PROM, data can be written only one time, and it remains there forever. PROM is capable to retain their needed data when Computer is getting turn off. User purchases a empty PROM, and inserts the needed data with help of PROM program.

To need the well trained PROM programmer for writing data on this chip. When programmer writes programs on the PROM, then this process is known as “Burning PROM”. After burning data, you can’t make any modification in the burnt content.

Applications of Programmable Read Only Memory

EPROM stands for “Erasable and Programmable Read Only Memory”,  and in which stored data can be deleted by using of ultra-violet light for some time frame up to 40 minutes. The ultraviolet light clears its data, and now you can to reprogram the memory. To write to and erase an EPROM, you require a special device called a PROM programmer or PROM burner.

EEPROM stands for “Electrically Erasable and Programmable Read Only Memory“, and In EEPROM, all activities such as programming and erasing are performed by electrically. This EEPROM is able to reprogrammed and erased in more than ten thousand time. Entire chip cannot be erased one time, only erase one byte at once.

There are some real life examples of ROM, below explain each one –

What is the ROM in computer explain?

ROM is computer storage device as non-volatile nature that means it is able to store data for permanently; it can be read but not writable. ROM has a program that lets your computer get to start up, when it is turned on.

Why ROM is used in computer?

ROM is used to keep store the basic bootstrapping firmware for the your computer’s processor, and several firmware required to internally control self-contained devices like as optical disc drives, hard disk drives, graphic cards, and more.

How is data stored in ROM?

ROM is a kind of storage device that allows to keep store data as permanently on your computer as well as other electronic devices. It consists a program that is needed to get start up your PC that is more essential for boot-up; as well as it is able to execute many input/output tasks.

Is ROM is a volatile memory?

No! ROM is non-volatile nature memory that means its data will remain unchanged whenever turned off power supply.

What is ROM and its types?

ROM is computer storage medium as non-volatile nature that means it is able to store data for permanently; it can be read but not writable. ROM has five variants like as MROM, PROM, EPROM, EEPROM, and flash memory.

What is ROM capacity?

ROM chip is able to keep store many MB of data, usually 4 to 8 MB per chip.

ROM is stands for “Range of Motion” in medical term that is measurement of amount of movement around a certain joint or body part.

What is ROM and its examples?

ROM is storage medium to store data in permanently means, and it is non-volatile memory that means its data never destroy when power get turn off. The basic example of ROM is the cartridge that is used with video game consoles; it lets one system to run many games.

What are 10 examples of a ROM device?

What are different 5 types of ROM in computer?

ROM is classified into five types like as MROM, PROM, EPROM, EEPROM, and flash memory; above in this post, explained each one in detail; you can read them.

I hope that through this blog post; you have been fully learnt about what is ROM and its types, as well as example of ROM without any getting hassle. If this article is helpful for you, then please share it along with your friends, family members or relatives over social media platforms like as Facebook, Instagram, Linked In, Twitter, and more.

Read More: Types of RAM: Uses and Functions of RAM with Examples!!