Supercomputers have a huge performance compare to other using general purpose computer because its architectural and operational model depend on the parallel and grid processing. Primary motive to design of supercomputer was to be used in large scale organizations where need more computing power. 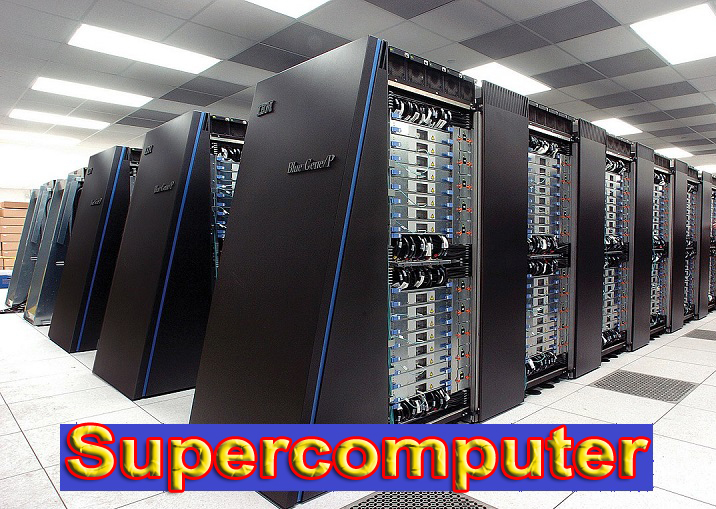 Supercomputer has a power to execute many processes simultaneously on thousand of processors, because these types of processors can execute billions and trillion of instructions per seconds, so its computing performance matrix is FLOPS (that is floating-point operations per second). So these types of supercomputers are more expensive they can 5 lakh dollars to 200 million dollars.

Read More – Types of Computer and Their Functions!!

Nowadays, supercomputers are designed by the traditional “companies”. For example, IBM, Cray and Hewlett-Packard. Tianhe-1A supercomputer is the fastest supercomputer since October 2010 that is located in the Chine. I hope that you are aware some things about what is supercomputer.

The supercomputer has to divide into three categories such as Vector processing machines, tightly connected cluster computer and in finally commodity computer.

Vector Processing Machines: This machine was invented in 1980 to 1990s. In which arrange the all processor in the array form, and its CPU is capable to execute all huge mathematically operations in a few time.

Tightly Connected Cluster Computer: In these types of system, connect all groups of computers and assigned the task to all group equally so the reason of this clustering enhanced the speed of computer. There are four types of cluster like as Director-based clusters, Two-node clusters, Multi-node clusters, and massively parallel clusters.

Commodity Cluster: In this system, high-bandwidth low-latency local area networks were interconnected by the Commodity computer.

There are some examples of Supercomputer with detail:

IBM Sequoia supercomputer was invented by industry weight, IBM at the national nuclear security administration, in 2012. Prime goal of producing this computer, implement those supercomputer in simulation of nuclear weapons. Blue Gene/L name replaced to earlier updation of supercomputer.

K computer was designed by company Fujitsu in the Japan. Main objective of this type of supercomputer implement in the diagnose, climatic, and disaster preventation. Its speed calculated Rmax 10.51 PFLOPS. Presently, this supercomputer is placed in the at Riken University at computer science department.

The Tianhe was assigned the first rank as fasted supercomputer in the year 2010-2011, its speed was Rmax 2.566 PFLOPS. This supercomputer was developed with estimated cost 490 millin dolor. Applications areas of this computer were petroleum exploration and design aircraft.

The Jaguar supercomputer came in the market before the Titan computer, and made by the Cray Company in their Oak ridge national laboratory in Tennessee. This supercomputer’s speed counted as 1.750 TeraFLOPS. This computers were developed for manage some complicated problems such as climate modeling, renewable energy, scientific simulations for exploration and fusion among other. Jaguar supercomputer built by 37,376 six-core AMD Istanbul processors.

This powerful project was chased by IBM in the year 2008. It was developed in the Los Angeles national laboratory, and its speed 1.026 petaFLOPS. The usages of these types of supercomputer were done in nuclear arsenal. That computer was more energy efficiency supercomputer in year 2009.

Kraken was other updated Cray XT5 system, and placed in computational science(NICS). Main objective of developing was done for increasing the efficiency of the biofuel and weather modeling. NICS having a good partnership in between the Tennessee University and Oak Ridge National Lab.

Jugene supercomputer was developed by IBM BlueGene/P technology, and in this computer use 72,000 processors. Its application areas are environment research, simulation material science, and other science research labs.

Mostly, supercomputer used to diagnose for various diseases, and provide the assistance for producing good result in strokes, brain injuries and other blood flow issues in your body.

Supercomputer application is able to study and understand climate patterns.

With the help of supercomputer, designed the flight simulators for newbie pilots and this simulator help to training for new pilots.

To gather the information related to weather forecasting, supercomputer run in the NOAA’s system, means National Oceanic and Atmospheric Administration. NOAA system is able to execute all types of simple and logically instructions.

In the weather and science research areas depend on the supercomputer because for analyzing data from the exploring solar system, satellites that rounding earth, and other area such as nuclear research.

Some large scale companies need the supercomputer for extracting useful information from data storage house or in the cloud system. Such as insurance companies.

Supercomputer plays vital role in the real financial success in the emerging online currency world such as bit coin and stock market.

Supercomputer provides the help to people for buying vehicle because before purchasing the vehicle customer can test through simulation environment that is created by supercomputer.

Scientists use supercomputers in own laboratory for predicting the fog and other pollution level on the particular areas, and then take final step to prevent them.

We will discuss about features of Supercomputer and advantages as well.

This supercomputer can easily decrypt your password for your security purpose.

Not More Expensive According to Work

More organizations use this computer as part time, because supercomputer is able to perform big task in few times.

The supercomputer has superb power of rending the animation in excellent result.

Supercomputer allow us to virtual testing for nuclear weapons and other dangerous medical testing, because these types of testing more harmful for environment if implement this on real time testing.

What is super computer and examples?

Supercomputer is a special computer that has great speed, memory and better performance than to other general purpose computers. For examples are Titan, IBM Sequoia, K Computer, Tianhe-I, Jaguar, IBM Roadrunner, and more.

The first supercomputer was designed by Seymour Cray in 1960 in Control Data Corporation (CDC).

What is the size of supercomputer in feet?

Supercomputer is a massive computer that contains the 57 miles of fibre-optic cables and weights a half-million pound; and it acquires the 6,000 square feet of floor space.

What is the speed of supercomputer?

Supercomputer’s speed is going to measure in floating-point operations per second (FLOPs). Petaflops are a measure of computer’s processing speed same to the thousand trillion flops.

Where are supercomputers used?

What are 5 uses of supercomputer?

A supercomputer is used in such area where to need ultra-computing process of data such as:

How many types of supercomputers are there?

The supercomputer is classified into two categories like as Vector processing machines and tightly connected cluster computer.

What are the different types of supercomputers in India?

There are many types of supercomputer, which are used in India like as: PARAM Siddhi-AI, Pratyush (Cray XC40), Mihir (Cray XC40) and so on.

What are the 10 examples of supercomputer?

What are the four applications of supercomputer in real-life?

There are four real-life applications of supercomputer that you don’t aware about till now like as:

What are the main characteristics of supercomputer?

What are the features of supercomputer?

Through this article, we already have explained above many features of supercomputer; you can read them.

Now i hope that, you have been completed aware about What is supercomputer and its types, examples, applications; involving with characteristics and features of supercomputer with ease. If this article is helpful for you, then please share it along with your friends, family members or relatives over social media platforms like as Facebook, Instagram, Linked In, Twitter, and more.