What is Tree Topology: Examples, Types, Uses, and Applications!!

What is Tree Topology?

A tree topology is an especial kind of structure whereas several attached elements are managed such as branches of a tree. In the tree topology network, all computers and terminals are linked to the main system as a hierarchical aspect. Tree topology enables the many star topologies that involve a variety of single node that is connected to a centralized node. 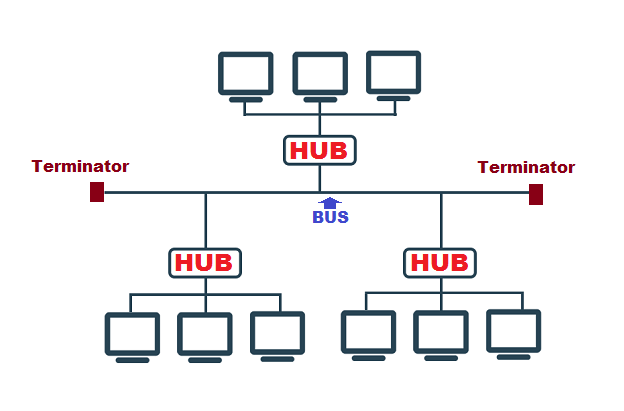 Tree topology is also called the star bus topology, because it enables the elements of both star and bus topology network. A tree topology is going to use a simplest program to keep handle the network. It also offers the concentration point for control and error resolution. It is a central system that is the uppermost order of hierarchy, and usually it is mainframe computer. A tree topology allows to point to point cabling that is made for separately segments; as well as it is supportable for many hardware and software vendors.

In the way of computer network, the tree network topology is sometimes also called the star topology because it merges the features of both bus and star topologies to make like as tree structure. In the tree topology, each branch has star network topology, and then it is getting to make structure as bus backbone cable. So, the primary bus is linked to single or multiple buses and network switches; and furthermost it attaches to one or multiple network devices and nodes. It is great scalable network topology that lets you to attach many network devices over this network by scaling the star network at every branch of a tree. But, you might require adding or removing devices at the specific time duration.

A tree topology is going to classified into three different categories; below shown each one, you can read them:

In this tree network topology, the parent-child connection is existed in between the nodes is most specific notion. Its parent’s devices are simply network switch or hub.

This network topology contains the backbone cable that has the responsible of making communication across the tree network, and you attach the PCs to centralized devices like as switches and hubs. Beyond of the connecting to every computer separately, then the bus backbone connects to the central devices. Users are capable to connect the all gadgets directly to the backbone wire if they like.

In the spanning tree topology, all nodes are going to connect into graph form. It’s also has another variant that is MST (Minimal Spanning Tree). It provides the way to attach all graph edges. This topology has several backbone cables for attaching many clusters, which are presented at the whole computer network.

Important!! Whenever a signal arrive the edge of the backbone cable; then it is eliminated by the terminator that is presented at the end of backbone cable. If it doesn’t arrives till edge and keep on getting to loop at the backbone then STP (Spanning Tree Protocol) is used, to prevent the traffic congestion over the network.

There are many examples that are going to use in your daily life, like as:

Uses and Applications of Tree Topology

Tree topology is usually going to use for recognising the system in a network into order to distribute data across the network and to let network operator to link many servers.

Tree Topology Considerations; You Should Be Known

Also Read: What is MAN (Metropolitan Area Network)? Examples and Types | How Does it Work?

What is tree topology with diagram?

Tree topology consists the characteristics of star and linear bus topology; and it allows the expansion of an available network. Its diagram is already shown above in this post; you can check it.

What is another name of tree topology?

A tree topology is also called the ‘Hierarchical Topology’; the root node links to all other nodes as the form of hierarchy. As well as, it’s also another name is ‘Star Bus Topology’ because it merge the many star topologies into the single bus.

What is tree topology example in the real life?

In big university campuses and hospitals, several floors can be attached with each other via combination central bus backbone and star topology.

What are the different types of tree topology in computer networking?

Where tree topology is used in real life?

A tree topology is usually going to use to link several devices like as computers, printers, and FAX machine, in your house otherwise small office.

Now, i make ensure that you have been completely educated about what is tree topology with its diagram, examples and uses; as well as involving with applications and types of tree topology with ease. If this article is helpful for you, then please share it along with your friends, family members or relatives over social media platforms like as Facebook, Instagram, Linked In, Twitter, and more.