Advantages and Disadvantages of Repeater in Networking | Features and Characteristics

Repeater is a network hardware device that is worked at the physical layer of OSI model, and it helps to amplify or regenerate the signals before retransmitting it. Repeater is also known as “Signal Boosters”.

A repeater has ability to extend the data signal from one network segment and then pass it to another network segment, thus scaling the size of network. The repeater allows to transfer the data through large area distance, and it can ensure for security and quality of data as well as retransmitting the data with securely preserving the signals. 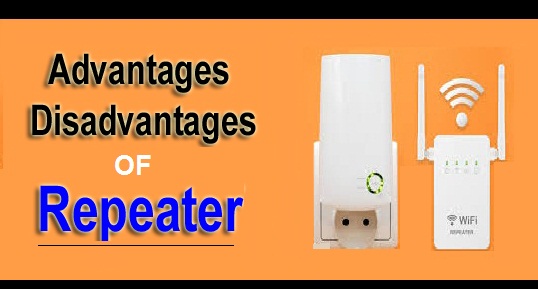 There are various benefits and features of repeater in the computer networking; below explain each one –

Better Performance: A repeater is not getting to totally depend on the processing overhead, so they have many numbers of impacts on the system performance.

Boost up Signals: If, computer and router is placed with long distance with each other then it will output as weak signals. So, user can get slow internet speed. A repeater has ability to boost up the signals so that it helps to retransmit higher stronger along with great performance.

Scale Network: A repeater is capable to extend the length of transmission that means it has ability to scale the total distance covered by network either it wired or wireless medium.

Physical Obstructions: Due to physical barriers, it can allow to weak signals of wireless connectivity. With the help of wireless repeater, it can decrease their impacts. So, there will be assurance that signals will be transmitted to computer systems.

Supported Media: In a repeater, Network can be linked for reception and transmission using of several physical Medias. For example is Cable.

Low Cost: Repeaters are cheaper than to other using of networking hardware devices. They are available at the market with minimal cost.

Characteristics of Repeater Are

Read Also: What is Repeater with their Types and Functions?

There are various drawbacks of the repeater in the computer networking; below explain each one –

Restriction for Number of Repeaters: You have most restriction in the number of repeaters which are using on the specific network. If, you try to connect more repeaters to network then it will generate the noise on the wire and enhance the chances for packet collision.

Less Segmentation: A repeater is not ability to segment the network. For example: if you use two different types of cables each with segments. So, it is not capable generate the separate traffic from one cable to other.

Collision Domain: When all information is moved to various domains, then repeaters are not able to separate the connected network devices. Moreover repeater has not capability to identify if it is a associated unit of same collision domain.

Bandwidth Usage: A wireless repeater is capable to transmit the signals in both directions in between the router and computer. When, computer attaches to wireless repeater, then bandwidth are effectively halved.

Network Architecture: A repeater has not capability to connect networks along with different network architectures. So, to fulfill this purpose, you can use the gateway or router.