What is: Basic Hardware Components (Devices) of Computer Network

What is Network Components

Definition – Network Components is also called the “Network Device” or “Network Equipment” or “Computer Networking Devices” which are used to need make communication and interaction between multiple computers over network. 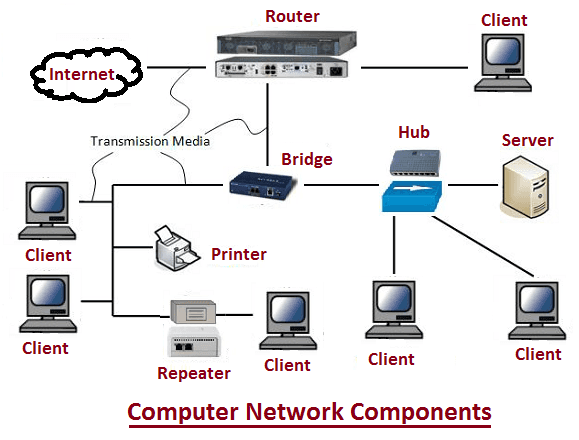 Hardware Components are known as “Network Hardware Devices” that are linked each other through wire or wireless connection medium.

Network Interface Card (NIC) is  hardware component that is used to link multiple computers with each other over the network. NIC performs some activates such as sending and receiving data as well as controlling data flow between linked all terminals over the network. NIC is capable to send and receive data on (10,100 to 1000 Mb/s) transfer rate. All NIC contain unique id (MAC address) that is programmed on chip, and it is embedded on the network interface card.

NIC has two variant such as –

Hub is also a hardware component of computer network that helps to split large network connections into small multiple network terminals. Hub works as distribution point. When computes try to request for some piece of data from network (wired or wireless), then it has first priority to send request to Hub via cable. Hub will transmit those requests over the network, and all linked terminal will determine that those requests are related to them or not. If not related then all requests will be trashed.

Types of modem are:

Ethernet modem – It is connected into NIC in the computer system.

Switches are used in the wired network such as Ethernet network. Switch is a small hardware component that helps to receive data from other different input ports and send this got data to appropriate output port, and finally destination terminal obtains data over the network.

Here, some types of switches

Unmanaged switches – These switches are used in the small area such as home network.

Managed switches – These switches are used in medium size of area such as small and large organizations. There are two types such as Smart switches and Enterprise managed switches.

Ethernet switches – These types of switches are mostly used to decrease network congestion, and it helps to make connection with LAN points.

PoE switches – PoE switches stands for “Power over Ethernet”, and they deliver to great flexibility by cabling process.

Router performs all functions on the third layer of OSI model. Router helps to transfer data packet in between multiple point over the network. Router checks the destination IP (Internet Protocol) address of received data packet, and it transfers those data packets on best path according of headers and forwarding tables.

Types of Router are –

Bridges is very important hardware device of computer network because it helps to make interconnection along with multiple bridge network on the similar protocol. Bridges are also called of “Layer 2 switches”.

Bridges performs all functions on the data link layer of the ISO model, and it helps to keep the MAC (media access control) address table.

There are three types of bridge, such as –

Repeater performs all activates on the physical layer of the OSI model. It is very helpful to regain or replicate analog or digital signals, which are distorted by transmission loss. So it is known as “Signal Booster”.

Repeater is capable to relay messages between multiple sub networks in the data network.

Repeater has some variants, such as –

Gateway is a special type of hardware component of the network, and it performs activities like “Gate” between two networks. Gateways provide protection like firewalls from unwanted traffic because it is placed at the edge of the network system so all data get in and out in the network through Gateways.

Gateway works on the top layers of OSI model such as transport, session, presentation, and application layers. But, it is useless to make communication between two same network protocols.

Examples of Gateway are –

Client is edge point of computers which are obtained the requests and received services from server side, and it uses computer network resources such as printer, scanner, plotter, and more.

Server is high level computer which are get high configuration. It has responsibility to handle all resources of the entire network system. On the server, a special type of operating system is installed, it is known as network operating system.

Server has some variants such as –

Network software is a superior element that provides instructions to all network components for performing their tasks together.

Networking Operating System is designed especially to network system. It is installed on the server then it delivers to some facilitate to workstations on the network such as share files, database, applications, fax machine, plotters, printers etc.

Protocol is set of rules or some guideline followed by every node of network for data communication. Protocol Suite is group of some related protocols which are especially designed for computer networks.

OSI Model – OSI stands for Open System interconnections, and it decides that how to flow data in between the multiple computers with the help of these seven layers such as  Physical, Data Link, Network, Transport, Session, Presentation and Application.

TCP/IP Model – TCP/IP stands for “Transmission Control Protocol and Internet Protocol“, and it delivers some instructions that how to make a connection with any specific computer over the network and how to get transmission between all computers nodes.

Here, Some Name of Software Components are –

Network protocols are groups of specified rules that decide how to swap data between in the multiple computers with easy, reliable and trustworthy way. Main objective of using of protocols are to spread and receive data over a network.

Here, Some Common Protocols are –

Connection medium is the appropriate way over which electrical signal flows as transfer from one terminal to another terminal over the network.

Connection medium has some variants such as –

Coaxial Cable is same to TV installation cable, and it delivers to high data transmission speed. So it is more expensive.

There are two type of coaxial cable

Fiber optic cable provides the ultra transmission data speed via light beams in the glass bound fiber. So its price is higher to other cable.

Wireless medium is more popular in small offices and home usage such as WIFI. In WIFI, radio signals get the transmission in the air, and multiple terminals (computer, laptop, smart phone, etc) make connection through WIFI signals then can be shared their data with each other.