What is Hub: Types & Working | Advantages and Disadvantages of Hub in Networking

A network hub is special device that helps to broadcast data to each node and computer or Ethernet based device linked to it. Don’t worry! Here, we will guide you in detail about what is hub with its Types and Working; involving with many advantages and disadvantages of hub in networking with ease. I make ensure that after reading this article; you will completely learn about what is hub in computer network without getting any hassle.

What is Hub in Networking?

Definition: The hub is used in the networking for making connection with multiple devices over the network. So it is known as “Network Hub“. It helps to connect various devices in the LAN network. Hub acts as central station because all devices are connected via hub in the network connection. It has many ports, and if a packet reaches at one port then it is copied so all other ports are able to see those packets.  So, it provides the help if any one port of the hub gets halt. 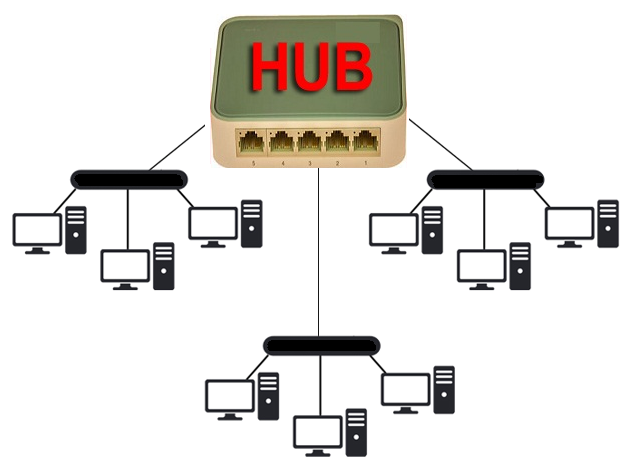 Network hub does not contain any routing table that is used for sending all information as well as broadcast all network data every connection. Today, several hubs have capability to recognize many network issues, error, and bugs such as collision.

Types of Hub in Network

There are three different types of hubs which are used in the computer networking; below explain each one –

Network hubs works at physical layer of OSI model. Ethernet cable and plug are used in the network hub.

Hub play the role as centralized connection in between all network devices and manage data type, which is known as “Frames“. If frame is received, then it is broadcast to the port of targeted computer system, but after amplifying it.

All communication is divided into three parts, which is done between multiple hosts.

Unicast: Unicast communication is done in between from one device to further device.

Broadcast: In broadcast communication, one host communicates along with whole other host over the network.

Multicast: This multicast communication can be possible in between one host to further some other hosts.

So, you can say that hub is a broadcast method of the communication.

There are few benefits and features of network hub, such as –

What is hub in computer network?

A network hub is special device that helps to broadcast data to each node and computer or Ethernet based device linked to it. A network hub is best solution for simple local area network (LAN) environments.

What is the purpose of a network hub?

A network hub provides the point of connection for each device over the local area network; and hub works on OSI (Open Systems Interconnection) Layer 1.

What are the different types of Hubs in the computer network?

There are three different types of network hubs which are used in the computer networking like as Passive Hub, Active Hub, and Intelligent Hub. Each one is explained above in this post; you can check them.

How does hub work in networking?

In this article, already we have been explained about proper working of hub in the networking; you can check them.

What are main functions of a hub in networking?

What are the advantages and disadvantages of hub in networking?

Through this post, already we have been covered many advantages and disadvantages of hub in the computer network with ease; you can read them.

What are the advantages of hub over a switch?

A network hub allows to connect several Ethernet devices as a one unit; whereas network switch are able to link multiple devices along with one LAN network.

What is the main disadvantage of hub instead of switch?

A network hub are not capable to get differentiate in between the devices over the network. When one node tries to arrive another on the hub based network, then computer will broadcast the message to each other computer system over the network; cause of this, consume more bandwidth in every transfer.

Through this post, you have been completed educated about what is hub with its Types and Working; involving with many advantages and disadvantages of hub in networking with ease. If this article is fruitful for you, then please share it along with your friends, family members or relatives over social media platforms like as Facebook, Instagram, Linked In, Twitter, and more.