What is Storage Area Network? 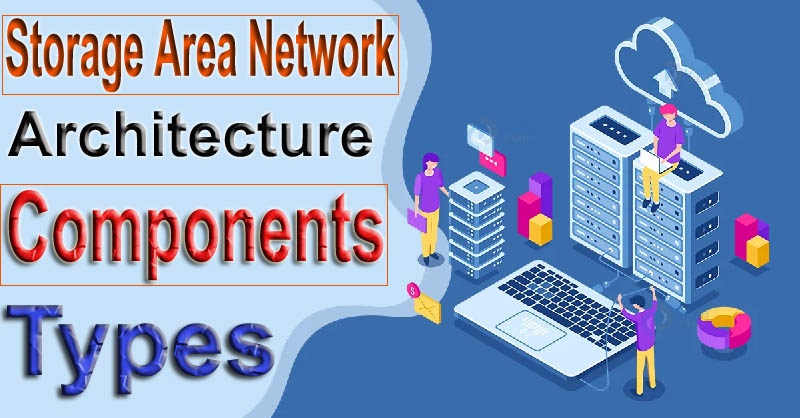 SAN is a dedicated network that is unable to get access via LAN network, because it is assembled with hosts, switches and other storage devices that are attached with helping of typologies, protocols, and technologies.

Headlines of Tutorial of SAN

Storage area network has three major components like as servers, network infrastructure, and storage. But these components are classified further into following essential elements such as Node ports, Cabling, Interconnecting devices (such as FC switches or hubs), Storage arrays, and SAN management software.

Now we let you know about these components in detail:

Node ports refers to simple devices such as Host, Storage, Tape Libraries that perform as source or destination for single or multiple nodes into fibre channel.

Each node contains one or multiple ports to make communication along with other nodes in this system. These types of port are internally elements of storage front-end adapters and Host Bus Adapter (HBA).

This port transfer the full-duplex data transmission mode along with a transmit link and receive link.

Storage Area Network (SAN) architecture implement the optical fiber cables, and you should be knowing that this cable carry data into light form and it has two variants like as: multi-mode optical cable and single-mode optical cable.

Multi-Mode Fiber Cable: MMF cable transmits the couples of beams of light projected at different angles simultaneously into core of cable. While this transmission, light beam transfer internal the cable towards to collide and disperse.  Multi-Mode Fiber Cable are accepted for short distance like up to 500 meters because of signal attenuation cause of dispersion.

Single-Mode Fiber: SMF cable carries a one beam of light via core of the fiber. Cable’s small core decrease the modal dispersion, and Single-mode fibers are implements for long distance that is up to 10 KM, cause of few attenuation, as well as SMF is expensive to MMF.

These devices allow making connection in between the host into storage area network environment, for examples are Hubs, Switches and Directors.

Hub: Hubs are communication devices that are implemented into fiber cable structure, and they help to connect nodes into star or loop topology.

Switches: Switches are most excellent compare to hubs devices, and they allow directly move data from one port to other destination. They are not costlier and having better performance to hubs as well.

Directors: Directors acts as FC switches, but it has fault tolerance ability and higher port count. It is also used for data center implementation, and larger to switches.

The main objective of Storage Area Network N/W is to offer storage resources to its host. Storage array is also known as ‘Disk Array’, and this storage system is implemented for getting the block-based storage, file-based storage, or object storage. SAN storage environment offers the high availability and redundancy, business continuity, multiple host connectivity, and higher availability and redundancy as well.

This management application package manages the interface in between the host, interconnection devices, and storage arrays. It has more importance and lets the complete management of different resources from one single point and also provides the complete structure of SAN environment. This software is enabled with key management functions such as mapping of storage devices, switches, and servers, observance and generating alerts for discovered devices, and logical partitioning of the SAN, known as partitioning. It also handles the major elements of SAN such as interconnection and storage devices. 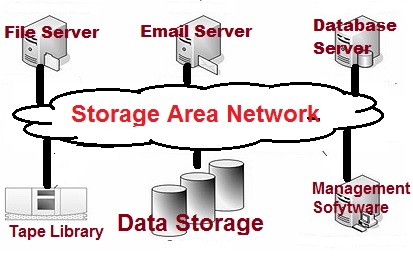 Hosts Layer: Node ports refers to simple devices such as Host, Storage, Tape Libraries that perform as source or destination for single or multiple nodes into fibre channel.

Fabric Layer: Storage Area Network (SAN) architecture implements the optical fiber cables, and you should be knowing that this cable carry data into light form and it has two variants like as: multi-mode optical cable and single-mode optical cable.

Storage Layer: The main objective of Storage Area Network N/W is to offer storage resources to its host. Storage array is also known as ‘Disk Array’, and this storage system is implemented for getting the block-based storage, file-based storage, or object storage. SAN storage environment offers the high availability and redundancy, business continuity, multiple host connectivity, and higher availability and redundancy as well.

It has pool of storage that lets share in between different types of servers or nodes linked through network.

Different kinds of network or data transmission connections are implemented in between the storage infrastructure and all other connecting nodes & switches.

Entire data storage is totally depended upon the type of SAN structure or network topology.

SAN protocol is a kind of connection that lets identify how devices and switches are making communication with each other along with storage area network fabric. Storage area network has five different types of protocols, below shown each one:

Fibre Channel Protocol (FCP): This protocol is implemented in fibre channel transport protocol along with embedded SCSI commands. It is used widely, captured in up 80% of total SAN market.

Internet Small Computer System Interface (iSCSI): This protocol gets encapsulates SCSI commands internally as Ethernet frame and implements an IP Ethernet network for transport. It is next largest storage area network that deployed near about 15% of market.

Fibre Channel over Ethernet (FCoE): As like iSCSI protocol, it also gets encapsulate and FC frame internally Ethernet datagram. This also uses IP Ethernet n/t for transport. But, FCoE is getting to capture less than % of SAN market.

Non-Volatile Memory Express over Fibre Channel: It is host controller interface for getting access flash storage protocol. It allows moving data in between enterprise and client system and solid-state drive over the computer’s ultra-speed Peripheral Component Interconnect Express bus.

Storage area network is getting more demand in the market, because it offers many benefits like as:

What are types of zoning in SAN (storage area network)

There are two different methods of zoning that can be implemented to a SAN: World Wide Name zoning and port zoning.

What is data center in storage area network?

A data center lets you offer a shared access to application and data with using a complex network, computing, and storage structure.

What are a storage area network examples?

There are five examples, which are used as SAN protocol like as:

Where is storage area network used?

SAN is mostly used for getting to access storage devices like as tap libraries and disk-based devices from the servers, and it can’t be accessed by LAN network.

What are applications of storage area network?

Why do you use storage area network in cloud computing?

Storage Area Network is a dedicated, independent and high-speed network that offers block level data storage, and it provides the shared pool of storage devices to multiple servers. Therefore, it is used in cloud computing system.

Making ensure, in this article you have completely learnt about what is Storage Area Network with their components, types, and example and so on. If this content is helpful for you, then share it along with your friends, family members or relatives over social media platforms like as Facebook, Instagram, Linked In, Twitter, and more.