What is Bus Topology?

Definition: A bus topology is also known as “Line Topology“, and it is used in the Local Area Network. In bus topology network all devices (Computers, printers etc) are linked with using one backbone wire like as coaxial cable, RJ-45, STP or UTP. 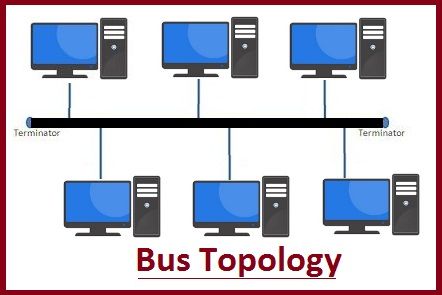 In bus topology, data flows with bidirectional (both side). If, sometime backbone wire gets damage then whole network will be halt. It is main drawback of this topology.

In computer network, several computers are attached with each other through communication medium (Wired or wireless). These linked computers over the network are called “Nodes”. These computers which are linked in the network can share different resources like as files, printers, FAX machine etc.

Bus Topology is used in the computer networks, in which all computers are linked to each other through one cable. This cable is known as “Backbone of Network”. Mostly Ethernet cable is implemented to connect multiple nodes in the Bus Topology. In Bus Topology, all information passes from first node to last node over the network.

There are various benefits of bus topology in network such as –

Here, some drawbacks of bus topology in network, such as –

Applications & Uses of Bus Topology are :-

Second way is to use bus topology system; it means each floor’s telephone is connected to main landline cable through telephone sockets.

Ethernet network is best alternative to LAN network, and it has high speed (10 million bits per second) to transmit and receive data compare to Local Area Network (LAN).

Various I/O devices such as printers, FAX machine, scanner etc can be attached in office with using of bus topology network.

How to Expand Cable

With the help of “Barrel of Tip” connector, can be connected two small part of cable, and expand the cable.

“Repeater” device also helps to connect two cables, and it increases the signal to reach its target node.

What is bus topology and its diagram?

A bus topology is going to use for ‘Local Area Network’ whereas all nodes are linked along with a single cable, and this cable is known as the ‘Backbone’ because if it cable is broken then entire network will be failed. You can check bus topology diagram above in this article.

Why is it called a bus topology?

Bus topology is a LAN network topology where all devices (Computers, printers etc.) are attached to main cable or link as bus form, so it is called the bus topology.

What is bus topology with examples?

A bus topology is also known as ‘Line Topology’ because here all devices are attached by one central RJ-45 network cable or coaxial cable over the network. For example is to connect two floors via single line.

Bus topology is invented by Robert Metcalfe and his associates in 1972.

What is the speed of bus topology?

The information flows via the cable in both directions at an approximate speed of 10/100 Mbps.

Where bus topology is used in real life?

The bus topology is going to use in a LAN network to make connection with different kinds of nodes to a specific cable like as coaxial cable/RJ-45 cable. A bus topology can be used in a small office to attach various I/O devices such as printers, FAX machine, scanner etc. with a single cable; then anyone can get access them on their workstation.

What are the examples of bus topology in daily life?

In this article, already we have been shown many examples of bus topology; and where you can use it, you can check them.

What are features of bus topology?

What are the advantages and disadvantages of bus topology?

A bus topology has many pros and cons, and they are already covered in this post; you can follow it.

Now, i hope that you have been fully educated about what is bus topology and its diagram, examples and uses; involving with advantages and disadvantages of bus topology in networking with ease. If this article is valuable for you, then please share it along with your friends, family members or relatives over social media platforms like as Facebook, Instagram, Linked In, Twitter, and more.