What is Linear Bus Topology?

Linear bus topology is a special network topology, where every machine is attached into sequential form that means one by one. In this scenario, the bus is a network connection in between the all devices. Whenever in the network chain, any link is failed then all network transmission is stopped. 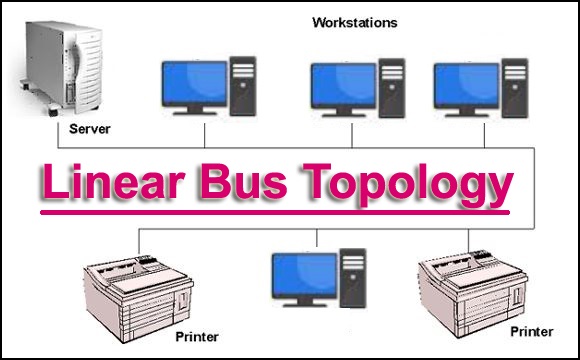 It is designed especially for small networks because it is easier to configure and uses the shorter cables since every machine links to the next one.

Second way is to use bus topology system; it means each floor’s telephone is connected to main landline cable through telephone sockets.

Ethernet network is best alternative to LAN network, and it has high speed (10 million bits per second) to transmit and receive data compare to Local Area Network (LAN).

Various I/O devices such as printers, FAX machine, scanner etc. can be attached in office with using of bus topology network.

What is linear topology and explain with its diagram?

A linear topology network consists of a main run cable along with a terminator at each edge like as file server, workstations, peripherals, and etc. Its diagram is already shown above in this article; you can check it.

What topology is also called a linear bus?

A linear bus topology is simplest network topology whereas every machine is attached into sequential form that means one by one. So it is also known as the sequential bus topology.

What are the examples of linear topology in real life?

In this post, already we have been covered several examples of linear bus topology, which are using in your daily life.

Making ensure that you have been completed educated about what is linear bus topology with its examples; involving with several advantages and disadvantages of linear bus topology with ease. If this article is valuable for you, then please share it along with your friends, family members or relatives over social media platforms like as Facebook, Instagram, Linked In, Twitter, and more.

Also Read: What is Hybrid Topology? And It Advantages and Disadvantages!!