What is MAN (Metropolitan Area Network)? Examples and Types | How Does it Work?

A Metropolitan Area Network is a computer network that allows to connect multiple computers with a metropolitan area. So, now we will explain about what is MAN network and its examples, types, uses, functions, and purpose; and involving with how does MAN network work without getting any hassle.

Metropolitan Area Network is a computer network that allows to interconnect users at the geographic region along with the computer resources. The MAN network is capable to cover the area that is smaller to that covered by the WAN network; but it is the enlarge compare to that is covered by the LAN network. The MAN network represents to an interconnection of the networks in the city that is linked to an enlarger network, which turn can be attached to a Wide Area Network. This network can also to be used to explore the interconnection in a metropolitan area of many LAN networks via point to point connection between them. 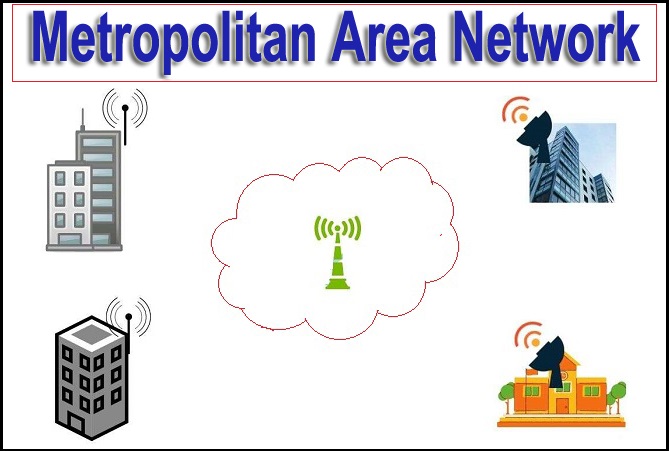 The MAN network has three primary features that distinguish it from other networks such as LAN and WAN network:

There are many examples of Metropolitan Area Network, which are using by you in daily life like as:

Network Between many Branches:

In the same city, several stores and other business offices are going to interconnect that letting user to find out any product at the nearest store outlet; if it is out of stock then can  make request at other located store. So the customers are able to book any product in the some other store outlet.

It is also known as the ‘Campus Area Network‘; they are actually a MAN networks that are adopted to all several building and make up a university city, as well as separated from each other by certain distances.

The all data of the municipality usually shared over the computer network that specify only those who are living in it; as well as other citizens who are living different localities will have their own. Hence, all payment of municipal taxes and other bureaucratic procedures can be implemented more effectively.

ISP (Internet Service Provider) companies are providing the local internet access to certain area. They are implemented by many MAN networks, so one of them the resources of a city or locality to the various clients requesting it, to specific LAN network.

Several government agencies need the joint work otherwise share the precious data, that are interconnected via fiber optic network; which allows them to be on the other side of city and not miss contact.

There are usually three different types of MAN network; below shown each one in detail, you can read them:

FDDI (Fiber Distribution Data Interface): Mostly, FDDI technology is going to use to establish the MAN network. It uses the optical fiber for its basic infrastructure that is why it is referred to as fiber distribution data interface. Therefore, it is presented as the Metropolitan Area Network technology; as well as it can support the data transmission of thousands of user at a same time. FDDI is implemented as the data transfer standard that can be getting to scale up about 200 KMs.

ATM (Asynchronous Transfer Mode): ATM technology is used for digital transfer that is designed in 1980 to going to facilitate real-time transmission. In Asynchronous Transfer Mode, all data is separated into format as identical packets that are going to transfer over time. While using the video conferencing, it was developed to get access high quality audio and video items. It is most convince for the wide-range data network, so welcome to its ATM features. ATM allows to incorporate the circuit switching and packet switching features that let the transmission of data in the real-time.

SMDS (Switched Multi-Megabit Data Service): SMDS is represented to the data transfer technology that helps to transfer via connectionless service. In this service, all data is going to transfer by keeping the information in the header that can be sent to its target point individually through any network. Same as ATM, small packets of data formed in the SMDS also. SMDS also lets the transmission of datagrams over the enlarge geographical region.

A router is another networking device that allows facilitating the network connection. Router also assists the data packets to determine the path to be routed. Therefore, it keeps an eye on the data travel; and MAN network is often worked over the region of up to 50 KMs.

The main objective of MAN is to offer the long term connection to the Internet. Metropolitan Area Network also offers the LAN internet access into city and makes connection with them to large area network like as Internet.

MAN network is most suitable for those who have needed the higher capacity requirements. MAN network also has the capacity required at the low cost, more reliable to local telephone organization’s equivalent service. Metropolitan Area Network has ability to support text and voice data; as well as can be associated along with cable television network or radio waves.

The MAN network allows to cover the wider area of network to make communication secure, business-friendly, and network security better.

Today, the MAN network is going to use into many sectors; as well as you can also say the application of MAN network.

Also Read: What is Hybrid Topology? Advantages and Disadvantages!!

What is MAN network in computer?

Metropolitan Area Network is a computer network that allows to connect multiple computers with a metropolitan area, that could be a one large city, many cities and town otherwise any enlarge region along with multiple buildings.

Why is MAN network used?

The main goal of using Metropolitan Area Network is to get higher bandwidth enabled by the dedicated links of a MAN network. Its speed can vary from 1 gigabit per second to 100 Gbps.

What are the 10 examples of Metropolitan Area Network?

What is Metropolitan Area Network used for?

Metropolitan Area Network is used to make the connection in between many locations along within a metropolitan area like as office buildings in a city or town, collage buildings.

What are the different types of Metropolitan Area Network?

The MAN network is classified into three different categories like as:

What is the main function and purpose of Metropolitan Area Network?

The main purpose of MAN network is to offer the long term connection to the Internet. Metropolitan Area Network also provides the LAN internet access into city and makes connection with them to large area network like as Internet.

What are the applications of Metropolitan Area Network?

The MAN network is going to use into many areas like as Groundwater mapping, Digital cable television, Urban analysis, Land use land cover, and etc.

Making ensure, through this article you have completely learnt about what is MAN network and its examples, types, uses, functions, and purpose; and involving with how does MAN network work with ease. If this content is helpful for you, then share it along with your friends, family members or relatives over social media platforms like as Facebook, Instagram, Linked In, Twitter, and more.