Here, we will spread light on the working of laser printer with their printing process; below explain each one –

Working Diagram of Laser Printer is Done into 9 Steps 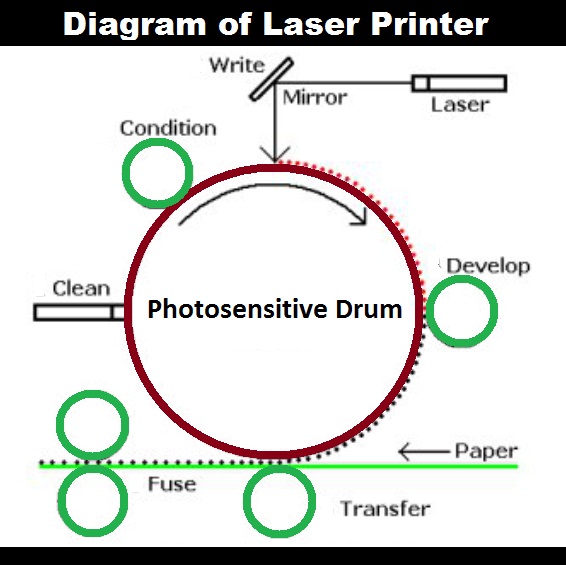 Image Processing: When you fire the print instruction on the specific document or picture, then computer system immediately transfers the all data to internal memory of laser printer. In this memory, output data is saved and gets to prepare for processing phases.

Charging:  Here, laser printer gets to start warm up, and corona wire is getting to heat up and gets to ready mode for sending its all positive static charge to metal cylinder drum.

Writing: At the same time, laser diode fires a laser to spin mirror that move to draw the image on to drum. Entire image of what you asked for it to print will appear on the drum as it turns

Conditioning: Electrostatic negative charge is supplied on the surface of the drum, and it helps to discard the last latent image from the photosensitive drum, and then gets to condition the drum for fresh latent image.

Exposing: While rotating of drum, it grabs the positive charge throughout on its entire surface. Few laser printers have all in one color models, it means having four drums which are catered to every color like as Cyan, Magenta, Yellow & Black. Now, laser printer is activated, and beam reflects off rolling mirror unit that helps to direct beam on the drum unit.

Transferring: Transfer belt gets to roll the paper with helping of printer, and it is providing the positive charge. Then, tone that is negatively charged is attracted with page as a format of your print.

Fusing: Hot roller gets to melt of toner on the surface of paper, it is known as fuser unit. Now you result is ready as a printout.

Cleaning and Recharging: During the cleaning process, remnants of toner on the drum are scraped away by electrically neutral soft plastic blade into waste reservoir.

Then, newly fresh cleaned drum obtains the new negative charge on it surface from charge roller, and gets to prepare the photosensitive drum for the new print job.

Components of Laser Printer with their Function

There are various components which are used in the laser printer; below explain each one – 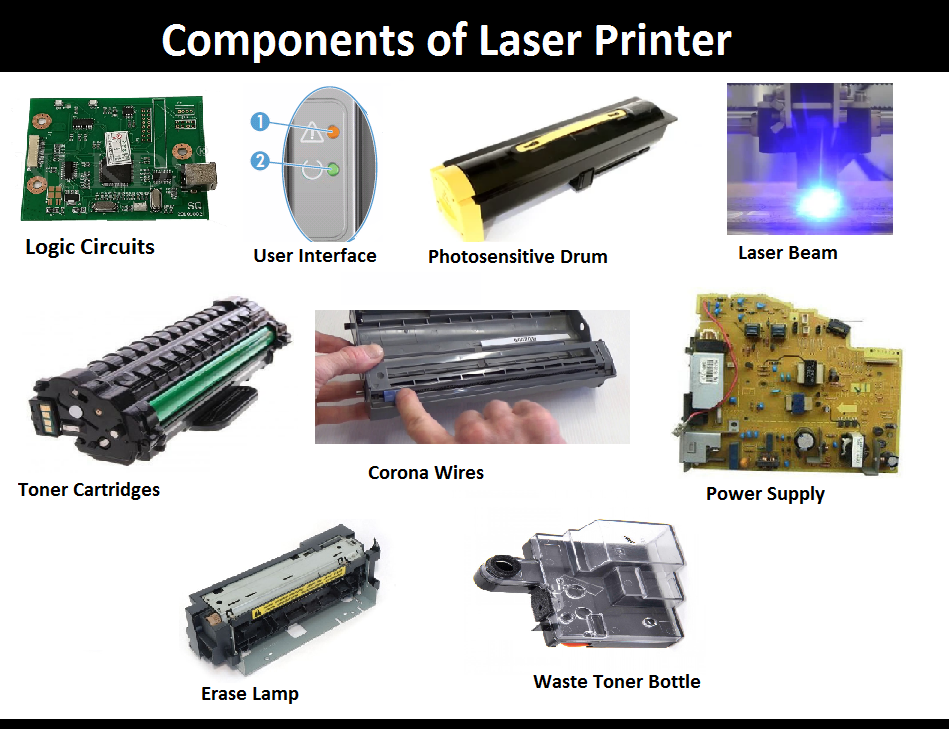 Laser printer has a motherboard as a computer. On this motherboard, various components are embedded like as CPU, memory, BIOS, and ROM modules with consisting printer languages and fonts. But today, some laser printers are available with employing network adapter, SCSI host adapter, HDD, and sound card.

On the laser printer, two LED are installed, one of them indicates is “Power On” and another indicate that is any error is occurred or not. Modern laser printers have LED panels along with control buttons, menus, and LED’s status.

Photosensitive Drum is a major component that is an internal part of toner cartridge. This drum is constructed with aluminum cylinder, and it is coated with photosensitive compound as well as electrically charged. It helps to capture the image that to be printed on your paper.

Laser beam helps to paint the image of printed paper on the drum. Laser beams is fired by the laser gun, and it is controlled by electronics that fires of light at mirrors inside the printer.

In laser printer, microscopic ink is used as particles as a powered that is called toner.  After heating, toner melts and allows it to be fused to paper fibers under pressure.

Corona wires are needed the higher voltage for create sufficient charge, and it is supplied by power supply.

There are two types of corona wires:

Power supply allows the higher voltage for charging the drum. Main aim of power supply is to convert AC current into high voltage that is required for transfer process.

Erase lamp allows to remove any remaining particle before getting the further print job.

The fuse unit contains the two rollers like as upper and lower roller.

Lower fuser roller does not require to be heated because it is constructed with soft silicon rubber that is holds the paper.

Waste Toner Bottle helps to gather the extra toner from photosensitive drum that is unused during printing process.