A bridge is a network device that is used to connect many LAN networks together along with a enlarge Local Network Area. Bridge network device is operated at the data link layer of the OSI model. Now, today we will explain about what is bridge in networking with its types, uses, and examples; as well as various functions of bridge in computer networking with ease. After reading this post; you will definitely fully aware about what is bridge in computer network without getting any obstacle.

What is Bridges in Networking?

Definition: A bridge is a computer network hardware device that works at the data link layer of OSI model, and it also helps to make interconnection in between multiple networks with using of same protocol.

Diagram of Bridge in Computer Network 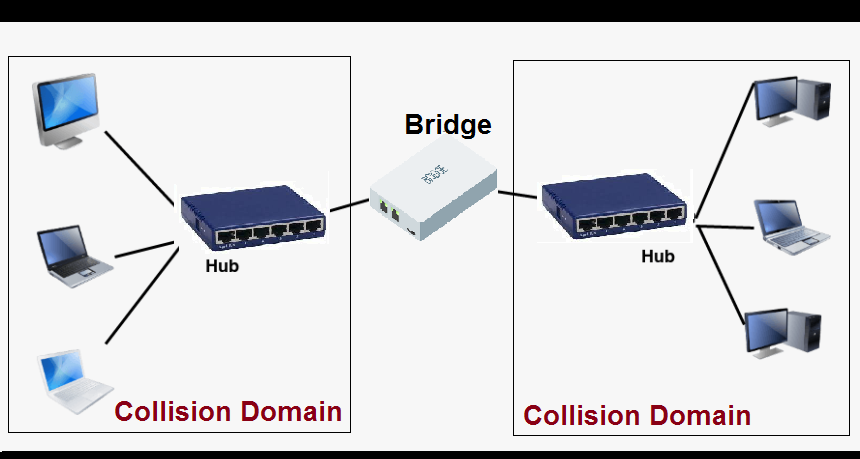 Network Bridge divides the large network into small segments, and these segments represent a separate collision domain, and it also helps to decrease the number of collision over the network. Every collision domain contains the own individual bandwidth, so its performance is getting to improve.

Data in The Network Bridge

Network bridge determines the entire incoming traffic and then it decide that where it forward or filter. Ethernet frame is audited for destination MAC address, and if bridge checks that the destination node is presented on another segment over the network then it transmits the frame to that segment.

Types of Bridges in Networking

There are different types of bridges in the networking; below explain each one –

It is also known as the “Learning Bridges“. Transparent bridge has not visibility to other installed stations or terminals over the computer network. It does not need to reconfigure the station because it is either added or deleted from the entire network. Main aim of the transparent bridge is getting to block or forwarding the data packets depend on the MAC address. It is getting more popularity while using in the networking.

Transparent bridge is a plug and play bridge. This bridge creates its table of terminal addresses on its own, and it allows to make its table for source location, and it is able to self updating.

Translational bridge plays the role for converting the one networking system to another type of system. This type of bridge allows to translate the fetched data. With the help of translational bridge, two different types of networks like as token ring and Ethernet network can be attached. It has a ability to remove or add the any field and information from frame when it is required.

Source-route bridge is introduced by IBM for using the Token ring networks. It allows to embed the all frame routes into one frame, and then this bridge takes the precise decisions that how the frame is forwarding with using of the network. In this technique, two same network segments can be linked to data link layer.

Special frames are discovered by the host, it is known as the “Discovery Frame“, and it spreads them over the entire network. Source-route Bridge helps to prevent the looping problems.

MAC-layer Bridge is also known as the “Local Bridge“, and it offers the packet filtering  and repeating  services for network segments of the similar types. It does not require the packet filtering or buffering because it simply broadcast the incoming data packets to the accurate port or remove them.

Remote Bridge allows to make connection two networks at different locations with using of WAN link like as MODEM or Leased Line. Its speed can be varied depend on the local and wide area links. This bridge has internal buffer that helps to hold the data grabbed from LAN network, and then it is getting

Uses of Bridge in Computer Network

In the computer network, the bridge is used to connect various LAN networks along with similar protocol an get communication in between the all networking devices which are linked to the network.

There are various uses of bridge in the networking; below explain each one –

·     Bridge helps to make connection with multiple different LANs network that has a same protocol and then they offer the communication in between the all nodes in them.

·   After connecting the multiple LANs, it allows to multiply the capacity of the network as a single LAN.

·    Bridge works at the data link layer, and they broadcast data as data frames. While receiving the data frame, it asks the database that data should be passed or removed the frame.

·        Bridge allows to prevent the halt entire network, while getting to fault single node.

·   If, any time destination MAC address is not presented then bridge can transmit data frames to every node. They get to maintain the MAC address table while discovering the new segments.

·  To offer full functional support and bridge require to be transparent. There is no major hardware, software or architectural updates must be needed for their installation.

·  Bridge has a ability to switch any type of packets from the network layer above, because it does not need any examination to payload field of data frame that reaches, but simply checks the MAC address for making to switch.

· Bridge is capable to virtual LAN to make a large VLAN network.

·    Wireless bridge allows to connect the wireless networks along with wireless segment. to wait for data transmission to remote site.

Functions of Bridges in Computer Network

Here, we will spread the light on the various functions of bridge in the networking; below explain each one –

·   The bridge allows to spit the local area network into many small segments.

·      Bridge helps to hold the MAC address of all computers in the network.

·       It helps to decrease the traffic over the network.

·  With using of MAC address, bridge gets to filter the all contents of source and destination points.

·    It is used for making the interconnection two LAN networks along with single and same protocol.

·  Bridge can work as single large LAN with connecting the multiple virtual LANs.

·    Bridge has ability to switch any types of data packets like as Apple talk packets or IP packets over the network layer because in which payload field of the data frame is not considered. Only MAC address or destination address of the frame is acceptable to block or forward the data to each node in the computer network.

What is Bridge in Computer Network?

A bridge is a network device that is used to connect many LAN networks together along with a enlarge Local Network Area. Bridge network device is operated at the data link layer of the OSI model.

What are the different types of bridge in networking?

There are five different kinds of bridge in the computer network like as Transparent Bridge, Translational Bridge, Source-Route Bridge, MAC-Layer Bridge, and Remote Type Bridge. Each one is explained in detail above in this article; you can check them.

What is the function of bridge in networking?

A bridge is a kind of networking device that makes the interconnection in between the other bridge networks, which are getting to use at the same protocol. The main role of bridge in computer network is to keep store and forwarding frames in between the different segment that are connected along with bridge.

Where is bridge used?

A bridge is going to use to spit a enlarge busy networks into many smaller and interconnected network units to enhance the performance. Bridge also helps to increase the physical size of a network.

What is the use of a bridge in networking?

In the computer network, the bridge is used to connect multiple LAN networks along with similar protocol an get communication in between the all networking devices which are linked to the network.

How does bridge work in networking?

In this article, already we have been explained about working of a network bridge with ease; you can read it.

What is an example of a bridge in networking?

A bridge is going to use make the interconnection two different LAN networks, which are help to operate other different protocols. For example – LAN A could be an Ethernet LAN and LAN B could be a token ring, it is known as the translation bridge.

What is the main function of bridge in networking?

The bridge allows to spit the local area network into many small segments, and It is able to performs the all tasks at the data link layer in OSI model.  It also helps to decrease the traffic over the network.

What is the purpose of bridge in computer networking?

A Bridge helps to make connection with multiple different LANs network that has a same protocol and then they offer the communication in between the all nodes in them. After connecting the multiple LANs, it allows to multiply the capacity of the network as a single LAN.

Now, i can hope that you have been fully educated about what is bridge in networking with its types, uses, and examples; as well as various functions of bridge in computer networking with ease. If this article is useful for you, then please share it along with your friends, family members or relatives over social media platforms like as Facebook, Instagram, Linked In, Twitter, and more.

Also Read: What is Repeater in Computer Network? Types, Uses, & Functions of Repeater!!