What is Dual Core

Meaning – Dual core means that two processors are embedded into one integrated circuit, so their caches and caches controllers are combined into single chip. Both processors are linked with each other, and due to this linkage, dual core is capable to execute their operations up to twice as fastest compare to single core processor.

What is Dual Core Processor

Definition – Dual core processors are more useful for multitasking environment because both processors perform their operations independently. It is capable to execute 64 bit instructions as well as it is hyper threading supportive. For example, if you are doing two tasks same time such as listen music and playing game then one processor can handle one task like as listen music and other processor manages your game 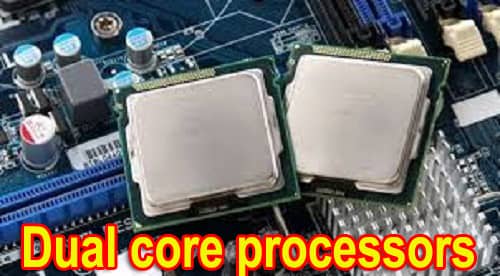 There are few popular dual core processors, like as

Dual Core Processors use two types of buses such as “Front Side Bus” and “Hyper Transport Bus”. Hyper Transport Bus is more useful for increasing the clock speed because in which their bandwidth is not shareable between the multiple CPUs.

There are various benefits and limitations of dual core processor. Such as-