What is Quad Core Processor

Definition – Quad core is a single chip (processor) that contain four independent cores, and every core has capable to perform their tasks independently instead of depended each other.

In these types of processor, all cores can operate with conjunction to another circuit like as memory management, cache memory and other input/output ports. In quad core processor, each core is able to run several programs at the same time period, and it helps to enhance the entire speed for running the programs with using of parallel processing. All core of quad core embedded into one semiconductor wafer, and these semiconductors wafers are integrated into single IC (integrated circuit). 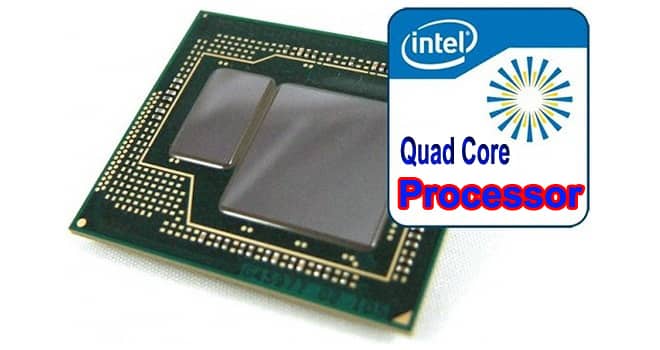 Main objective of designing of Quad core processor is to deliver higher processing power. Quad core is advance to dual core processor. In quad core, two independent dual cores are integrated into single processor, and these both dual cores make communication with each other with using of its cache.

Quad core and above processors are used commonly for general purpose computing system, just not for using of PCs. But due to its best processing speed, they can be used in mobile computing devices like as smart phones, PDAs, tablets etc.

Intel and AMD are most eminent manufacturers of quad core processor.

Intel processors are designed for using in Mac, Windows, and Linux operating systems.

AMD processors are designed only for using in Windows and Linux operating systems.

There are some features and benefits of quad core processor, such as –

Due to use of quad core processors, to increase your system’s performance and speed, and its speed is measured into clock speed, and it is capable to execute multiple tasks at once. When single program used huge amount of resources then quad core processor handle this over use resources. For example – Four cores theoretically enables that video player to use its own core, while allowing a word processor or other program to utilize a different core.

It is easy to assume that four cores will consume more than two core’s energy. However these power-hogging apprehensions have largely been proved to be a myth, as part of new efficiency innovations. This innovation spans automatic CPU clock throttling, into a secret “fifth” core designed to handle non-processor-intensive tasks that play music. As a result, quad core processors can actually consume less power during heavy usage.

Due to excellent performance of Quad core processor, it is used in various different applications. For Example –

Here, we spread light on few con of quad core processor, like as –