25 Advantages and Disadvantages of NoSQL Database | Pros and Cons

NOSQL database is a ‘Non-Relational Database Management System’ that is introduced by Carl Strozz in 1998; as well as it is capable to accommodate a wide range of data models like as key-value, document, columnar and graph formats. It doesn’t allow to need a fixed schema. 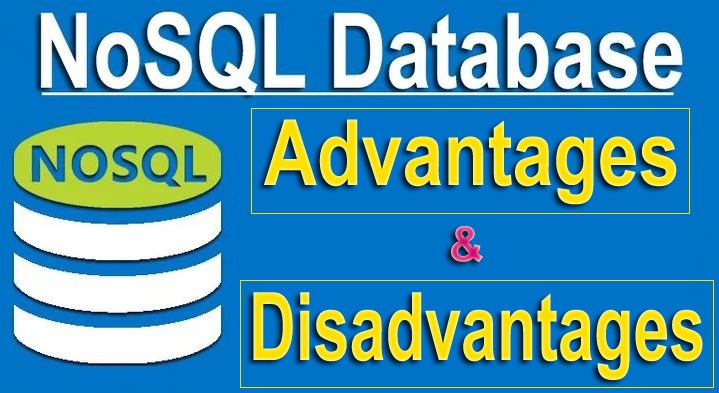 The main objective of using NoSQL database is to distribute data stores along with humongous data storage needs. Mostly, NOSQL database is going to use for real-time web applications and Big data like as Twitter, Facebook and Google.

Here, we are going to cover major advantages and benefits of NoSQL database in detail; below shown each one, you can check them with ease:

NOSQL databases are getting higher flexible, so they are capable to keep store and merge any kinds of data, both structured and unstructured. But, relational databases can keep store data only as a structured way.

NoSQL database is getting higher scalable and can be updated to achieve the unique scaling needs of your business goals. This database can be scaled horizontally, due to its less structuring as compare to SQL database. Each item is getting self-contained and independent. Hence, every object is stored at the separate servers and required not be attached.

NoSQL database is inexpensive for getting to install and manage as compare to other traditional SQL servers. Users don’t have to need purchase licensed server and data centers to run bringing down the expense of the application and maintenance.

NoSQL databases let user to dynamically update the schema along with changing the needs, while making ensure that it would cause no downtime or interruption to your favorite applications.

Most of NoSQL databases are capable to keep manage the extensive datasets, and making them ideal for the big data applications, real-time analytics, and IoT (Internet of Things). For example: BigTable is a distributed storage system that is built to keep store structured data in the cloud at the scale that lets get addition and deletion without any downtime or interruption with ease.

Hence, BigTable is getting to keep store this information, then it has chance to instantly retrieve it while offering the access control support across whole level down to separate fields along with in your documents without needing any extra security layers. So, you don’t have to need any one point of failure that means you can hold unlimited data without any hindrance.

NOSQL offers an easiest way to keep store the data as the structure of the database in not limited. It can be updated as requirements without any restrictions. This is most convince, where data structure is not finalized like as voice, network data, or pictures; as well as NOSQL database offers an efficient path to keep store/fetch and process the data.

NOSQL database are getting to make for great performance, measured in terms of both throughput (measure of overall performance) and latency (delay between request and actual response).

Most of NoSQL database management systems just needs some lines of code that make deal for developers who are getting to begin instantly. For example: MongoDB is an open-source NoSQL database that lets developers to keep store data as flexible structure and fetch it along with code that is written in the language of their selection.

NoSQL databases don’t have to need buy any expensive licensing fees and they are capable to run on affordable hardware resources, and rendering their deployment cost-effective.

NoSQL database is not getting to need at the same level of ongoing database administration as compare to traditional relational databases. They are capable to get automatically partition and replicate information across all nodes. Hence, you haven’t need any extra IT infrastructure, costly hardware, and software licenses same as the standard SQL-relational database that can be a get financial burden for your business.

Mostly NoSQL directories are getting to scale to oblige different kinds of information collection and sets higher volumes of traffic. The conveying a data set utilizing many PCs, likewise accepts the information base to grow and contract limited naturally. Numerous NoSQL information based is capable to redesign and permit the construction of a data set to change without any interruption.

Although, NoSQL database has variety of many advantages, but still there are some drawbacks. Therefore, here we will talk about various disadvantages and limitations of NoSQL database; they are as follows:

There is not getting any standard that is defined rules and roles of NoSQL database. The query language and its design of NoSQL database vary widely in between the different NoSQL products. They are much more widely as compare to among traditional SQL databases.

NOSQL database are getting most flexible, while keeping a wide variety of data structures; but they have less complex query functionality found in the SQL. That means you are not able to use various kinds of standard queries along with this types of database system. For example: NoSQL database is not capable to enforce or guarantee uniqueness for the key along with in documents as compare to traditional relational systems.

Backups are the main limitation of NoSQL databases. Few NoSQL database such as MongoDB offers few tools for taking the backup; but these tools are not offering sufficient to make ensure proper fully data backup solution.

It is the most significant drawbacks is that SQL has endless online support, documentation, and tutorials. But along with NoSQL database, it might be more challenging to find solutions to issues.

NOSQL database is getting to suffer from the consistency whenever it comes to keep store massive amount of data. But, SQL database offers the something’s known as ACID (Atomic, Consistent, Isolated, and Durability) that means it is providing guarantee of trust able transaction is available. So, NoSQL has less consistency, developers to write their code for this.

NOSQL database is developed to keep manage huge volume of data with different nature. When it is getting to come to analytics and drawing business insight, therefore NoSQL is not sufficient for SQL. But, today most of applications are going to adopt both models for different natures of use case.

NoSQL Isn’t Designed to Scale by Itself:

There are some NoSQL database management systems, which are able to scale out your applications such as BigTable or MongoDB replica sets;  but their design limit the volume of traffic, they are capable to accommodate by themselves. Unlike of these, you have to need some extra in infrastructure components (like load balancers), that allow to increase both hardware costs as well as operational overhead.

Still, SQL instructions are getting a few compatibility issues; so new database use their own characteristics in the query language and they are not yet 100% compatible along with Structured Query Language that is used in relational databases. Hence, NoSQL database has more complicated with getting to support for work query issues.

Still there are various improvements to be made on few systems so that they are capable to run on non-Linux operating systems.

NoSQL databases don’t come along with SQL, because SQL is a pre-mature technology, well designed for managing data; while NoSQL database is not analysts are fully familiar along with Structured Query Language; and can be used it at the frequently. Main goal of designing the NoSQL database is to research huge volumes of disorganized, stored data, collected from many different sources.

What are the advantages of NoSQL vs SQL?

NOSQL databases are getting more popularity because they are capable to keep store data into simplest straightforward format that can be easily to get understand as compare to other kinds of data models used into SQL databases. As well as, NoSQL database usually allows to developers to directly update the structure of the data.

What are the advantages of NoSQL database in big data?

NoSQL databases allow to keep store data into document instead of the relational tables. Hence, it has rapid processing and analysing of huge volume of varied and unstructured data.

What are the advantages of NoSQL database over RDBMS?

There are many advantages and benefits of NOSQL database over the relational database management system like as: scalability, simplicity, less code, and easy maintenance.

What are the disadvantages of NoSQL database over RDBMS?

NoSQL database has many disadvantages and drawbacks over the relational database management system such as: Less Standardization, Less Flexible Queries, Backup of Database, Lack of Mature, Less Consistency and etc.

What are the advantages and disadvantages of NoSQL database over traditional RDBMS?

In this article, already we have been explained above many pros and cons of NoSQL over the RDBMS database; you can check them.

What are the major limitations of NoSQL database?

Today, NoSQL is a most popular database; but still it has some limitations as follow them:

Now, i can hope that you have been fully educated about various advantages and disadvantages of NoSQL database; as well as involving with benefits and drawbacks of NoSQL database with ease. If this post is useful for you, then please share it along with your friends, family members or relatives over social media platforms like as Facebook, Instagram, Linked In, Twitter, and more.