What is Kernel in Operating System? Functions & Types of Kernel !!

In this post, we are going to explain about what is kernel in operating system and its functions; as well as different types of kernel on OS with ease. This is unique article over the internet. At the end of this article; you will definitely fully aware about What is Kernel in OS without any hassle.

A kernel is an essential program that plays a vital role in operating system. When you will start your system then first of all kernel program will be loaded after getting the boot loader. The kernel is always available into the memory until the OS gets shut-down. 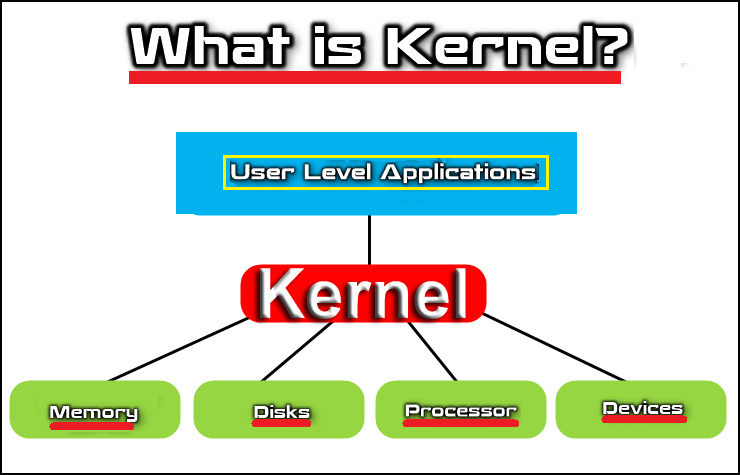 A kernel also works as mediator in between the hardware components and user. Whenever a process fires a request to the Kernel then it is known the ‘System Call’.

The kernel is designed being a protected Kernel Space that is a separate area of memory and this zone is not able to get access by other applications programs. Therefore, kernel’s code is loaded into this secured Kernel Space. Instead of this, the memory is used by another program is known as the User Space. This memory has two different spaces, so to make communication in between them is a little bit slower.

A kernel take decision that which process should be assigned to processor for executing and which process would be remain in the main memory to execute. The main objective of kernel in operating system is to keep handle the communication in between various software like as ‘CPU and disk memory’ and ‘User-level applications and hardware’.

In this section, we will show you various essential functions of kernel in OS; below mentioned each one:

The kernel has a responsibility for getting to access all computer resources like as RAM and input/output devices. RAM is going to use contain both instructions and data. Every program requires getting access the memory to execute and usually wish more memory than the presented. In this situation, the kernel plays the major role and takes decision, which memory each process will grab and what should do if the needed memory is not present. A kernel also assigns the request from application to use input/output hardware devices like as printer, microphone, joystick, and so on.

A kernel is an in charge over the memory, connected devices, CPU processes and works as bridge in between tasks and the resources. It also assigns the storage memory and RAM to the processes as per their requirements. If any process needs the hardware then it also assigns the hardware to it, but if any other task is already busy that resource then the new one process is moved to a waiting queue.

When a kernel creates and executes a process then it lives into memory that having the occupied space in it. Once a process is ended then the kernel deletes the process from the memory. The kernel allots the memory to process and release it as well.

The processes need to get access peripheral devices to perform many actions like as keyboard, mouse and more; they are attached along with the computer. The kernel has a responsibility to manage these types of devices with helping of device drivers. A device driver is a special program that allows to enable the operating system to make communication along with any hardware device. Then, the kernel manages the list of all these devices.

A kernel is able to perform executing, creating, and ending processed, which are running in the system when the system is going the ON state. A process is the log files of any task, which has all information about the task that is available into queue.

Whenever a system tries to execute any task then kernel creates and manages the all processed that is major task of the kernel and mismanagement of processes in the deadlock. The processed also make the communication with each other that is known as ‘inter-process management’. A kernel offers the Inter-Process Communication technique for synchronization and communication in between the processes (IPC). Inter-Process Communication has many variants like as shared memory, message queue, semaphore, FIFO, and more.

A kernel offers a part of the time to every process, whenever the process has completed own execution then kernel gets start the other process, and determine the state of process that could be one of ended, waiting, or running.

The kernel has a responsibility to handle the process creation, execution and termination. Whenever a process is running, then may come a task of upper priority and require to be executed first, then kernel takes decision and perform the processes as per their priority.

The kernel is the main head of all hardware devices, which are connected to it. It has also responsibility of all input/output that passes through these devices. Then, a kernel manages all information that user has access to and all output that the user obtains from several apps.

The kernel is also responsible to keep manage the all attribute of all file system of operating system as well.

Types of Kernel with Examples

Here, we are going to cover all types of kernel with their examples in operating system with ease; below shown each one in detail, you can check them:

Monolithic Kernel Examples are UNIX, Linux, Open VMS, XTS-400, and so on.

The microkernel is also represented as μK, and it is not similar the traditional Monolithic kernel. It has little bit different because in which, user services and kernel services are used into two different address spaces. Microkernels are able to manage and maintain with ease than to monolithic kernel. There will be many number of system calls and context switching, and then it may be degrade the performance of system by making it get slow.

These types of kernels use the message passing system for getting to handle a request from one server to another server. Only few essential services are given by the microkernel like as memory address spaces, IPC (Interprocess Communication), and process management.

Hybrid Kernel is also called the ‘Modular Kernel’, because it is a combination of both Microkernels and Monolithic. It uses the speed of monolithic kernels and modularity of microkernels. Its performance very similar to a microkernel, but it also enabled few additional codes in kernel space to increase the performance of the system.

Hybrid kernels let to execute few services like as network stack in kernel space to decrease the performance than to traditional microkernel, but it also allows to execute the kernel code as server in User space.

Nano kernels are the small in size that are consisting of only some thousand lines of code that means the code is going to execute in the privileged mode of hardware is minimal. They are mostly used on the embedded systems or devices along with limited resources.

Exokerne is an OS kernel that is designed by the group of MIT parallel and Distributed OS. In these types of kernels, the resources protection is separated from the management that output is letting us to perform application certain customization. Exokernel allocates the physical resources to applications; and it has some hardware abstractions as possible.

Still Exokerne is developing phase and is the experimental approach for going to designing OS.

What is kernel in OS and its type?

A kernel works as mediator in between the user and hardware components of the system. It is most important program that plays the major role in operating system. There are five types of kernel in OS like as Monolithic Kernel, Microkernel, Hybrid Kernel, Nano Kernel, and Exo Kernel.

What is kernel with examples?

It is the heart that offers the basic services for all other applications of operating system; for example are UNIX, Linux, Open VMS, XTS-400, L4, AmigaOS, Minix, K42, and so on.

What are different types of kernels in operating system?

There are five types of kernel in OS such as Monolithic Kernel, Microkernel, Hybrid Kernel, Nano Kernel, and Exo Kernel. Each one is explained above this article; you can check them.

How many types of kernels are available in operating systems?

What are the main functions of the kernel in operating system?

Through this article, already we have been explained above all major functions of kernel; you can read them.

Now i hope that, you have been completely educated about what is kernel in operating system and its functions; as well as different types of kernel on OS without any problem. If this post is helpful for you, then please share it along with your friends, family members or relatives over social media platforms like as Facebook, Instagram, Linked In, Twitter, and more.