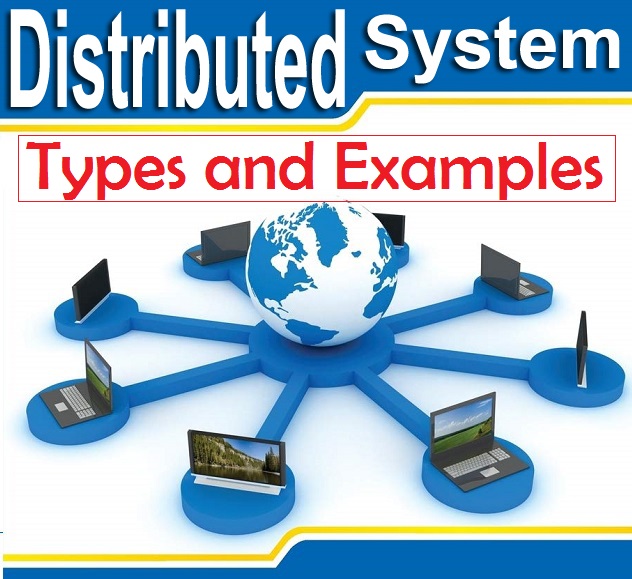 In this section, we will spread the light on different types of distributed system in detail as well as showing their examples; below mentioned all, you can read them:

Distributed computing system has two different variants like as cluster computing and grid computing; and both are explained in detail:

Cluster Computing: In cluster computing, multiple computers are linked over the network and works as an individual entity. Cluster computing offers the environment to fix difficult problems by providing fastest computational speed and improved data integrity. All linked systems execute all operations with together then making the impression such as virtual device. This method is going to work as transparency of the system. When client machine provides the input to the main computer then master CPU spits this task into easy jobs and push it to slaves note to do it, whenever the jobs are executed by the slave system; and they get move back to master node and then it display the out to your main computer.

Examples Are: It is also used in many areas such as Aerodynamics, data mining, weather forecasting, Search engines, web servers, and so on.

Grid Computing: Grid computing is a distributed model that allows to link many computers to accomplish a combine task. These tasks are compute intensive and getting to difficult for a single system to control. Multiple systems over the network collaborate underneath a common protocol and act as a single virtual supercomputer to done the complicated tasks. This provides the powerful virtualization by generating a single system image that allows the users and applications seamless get access to IT abilities.

Pervasive system is also known as ‘Ubiquitous Computing’; and it is the new one step for integration everyday objects along with microprocessors then this information is able to make communication. A computer system is present everywhere at the organization or usually available consumer system that seem as that same everywhere along with the similar functionality but that works from storage, computing power, locations across the globe.

Pervasive computing has the combine features of three technologies are:

Internet Standardization: This standardization is made with several standardization bodies and industry to offer the framework for merging all the components into interoperable system along with service, security, and billing system.

Examples Are: Electronic toll system on the highways, tracking apps like as Life360 that allows to track the location of user as well as speed at which they are driving, how much battery life their smartphones have Amazon Echo, Apple Watch, smart traffic lights, and Fitbit.

Distributed Information System is classified into three categories such as Distributed Transaction Processing, RPC, and Enterprise Application Integration; below shown each one, you can check them:

To set up examples for the Distributed Transaction stage, make the IBM® Db2® tables that are used by the sample jobs, import the sample jobs, and run a job to populate the source queue with messages.

There are various examples of Remote Procedure Calls (RPC); below mention all.

Remote File Access: Earliest, RPC was used to remote file and database access. Remote Procedure Calls was running in Valet-Plus VME-based test system, over Ethernet for getting to access all files on the mainframes and minicomputers.

Remote Graphics: In this case, active monitoring program gets to make call GKS standard graphics primitives, which are executed on a remote workstation.

There are different kinds of information systems, which are used into many areas like as:

Why to Use of EAI

There are many examples of distributed system, which are using in different areas like as:

Transportation Sector: Distributed systems are also going to use in transport in technologies such as GPS, traffic management system, and route finding systems.

Telephone & Cellular Network: Cellular network is also good example of distributed system, as early telephone and cellular companies were using the peer to peer network. But, now these organizations are adopting the distributed systems along with base station physically distributed in zones known as the ‘Cell’.

Distributed Real-time Systems: Many organizations are using the real-time system which are distributed globally and locally; like as Lyft use dispatch systems, Airlines use flight control systems, logistics and e-commerce companies use real-time tracking systems, and etc.

Distributed Database Systems: The distributed database is a specific database, that is situated over the many servers and physical spots. This data is either replicated or duplicated across systems.

Distributed Artificial Intelligence: Distributed artificial intelligence is a concept that is use to enlarge scale computing power and parallel processing to get learn and process enlarge data sets by using the multi-agents.

What are the different types of distributed systems with examples?

There are 3 types of distributed systems like as Distributed Computing System, Distributed Pervasive System, and Distributed Information System. It has many examples, which are using in different areas like as Aerodynamics, data mining, oil exploration researches, Cancer Research, Financial Analysis, Earthquake simulations, and etc.

Which type of network can be used by the distributed system?

How many types of distributed system are there?

A distributed system is classified into three categories such as Distributed Computing System, Distributed Pervasive System, and Distributed Information System; and above in this post, we already explored each one in detail, you can check them.

Now, i hope that, you have been completely aware about different types of distributed system and its examples; and involving various examples of distributed systems with ease; if this post is useful for you, then please share it along with your friends, family members or relatives over social media platforms like as Facebook, Instagram, Linked In, Twitter, and more.