Hi Guys! Today, we are going to cover about all advantages and disadvantages of Ubuntu Operating System; as well as involving with drawbacks and benefits of Ubuntu OS with ease. At the end of this post, you will definitely completely educate about pros and cons of Ubuntu OS without getting any hassle.

Ubuntu is a Linux based operating system that is developed by UK based company named the Canonical Ltd, in 2004. It is especially designed for smartphones, computers, and network servers. All principles are going to use for designing the Ubuntu OS are totally based on the principle of Open Source software development. 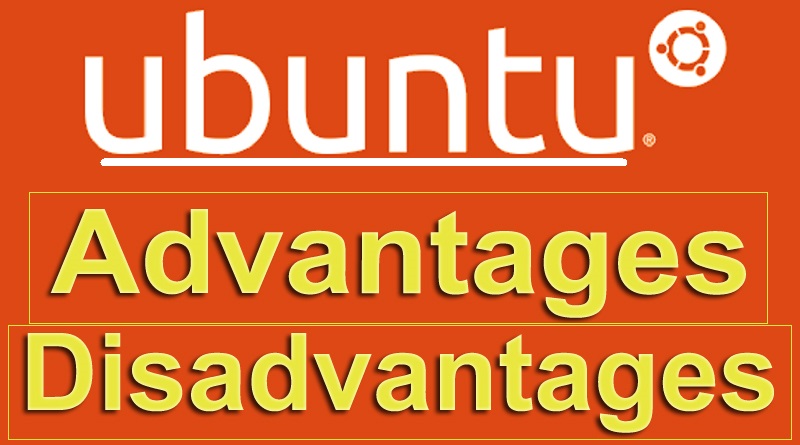 The primary version of Ubuntu introduces the GNOME (GNU Network Object Model Environment, pronounced gah-NOHM) that is graphical user interface and set of desktop apps for Linux. The main objective of releasing the GNOME is to make Linux easy to use for non-programmers and like as Windows desktop interface.

Advantages of Ubuntu over Windows

Here, we will spread light on the various benefits and pros of Ubuntu OS over Windows; below mention all, you can check them:

Free & Open-Source for Your System:

Ubuntu is an open-source operating system, so users can get download it as free without buying any license. On the other side, unlike Windows and macros operating systems are paid. Ubuntu’s source code is also presented for free over the internet, therefore you can easily check this code of OS and it can be changed the code as per your requirement for your convince.

Ubuntu operating system has a good portability that means this OS can be easily installed at different types of devices like as Windows systems and Mac system. It also executes smoothly over the network server, robots, IoT devices; involving with emulated or visualized computer environment through a virtual machine or system.

Most of cloud service providers are going to use this operating system, because it allows to support openStack. Other Iot devices and robotics has tinkered along with Ubuntu to get experience on new ideas and developer the new products and solutions.

Functions as “Do Not Disturb”:

The Ubuntu OS was designed being with the “Do not disturb” service that means user can easily to move your mouse at the upper of screen and hit on time and then it will showing up a pop-up at your screen; “Do not disturb” option will be visible at the bottom of the pop-up window. You can enable and disable this option as your convince. When you enable it then it will invisible all desktop notification at your screen; often these notifications are going to display at the upper of screen. If you disable this option, these notification alerts will not show at your screen.

By default, Ubuntu OS doesn’t need the higher system requirements than the modern version of macOS and Windows operating system. There are minimal hardware configurations are at least 700 Mhz processor, 512 MB of RAM, and 5GB storage capacity. Some certain flavours like as Lubuntu and Xubuntu are designed and optimized for low level hardware specifications.

The Ubuntu OS can easily execute directly from an external storage medium like as solid-state drive or a USB flash drive, and DVDs. It doesn’t alter the configuration of the computer system.

Ubuntu operating system allows you to get increase and decrease icons and font size by helping of fractional scaling. If you are using the many screens like as laptops otherwise another monitor then user can easily set the different scaling option such as (100%, 125%, 150%, 175% or 200%). Whenever, you are going to recommend the higher resolution screen, then fractional scaling will enhance the icons and fonts size on different screens.

Ubuntu OS has an active community that can assist for getting to fix bugs or announcing the new updates of features faster and more efficiently. As well as, this community also helps users being with troubleshooting and customization their requirements. This support is always active for longer time because such canonical updates will release after 6 months.

User can easily install multiple apps on the Ubuntu operating system. When, you are going to work for office then there is an app present, called the LibreOffice. This app has a lot of features and can be used as free like as make the presentations, MS word types of work. If you are doing a programming with coding then install the Php Storm, Visual Code, Sublime Text and other code editors. Other apps also installed on Ubuntu like as Chrome, Firefox, Skype, VLC player, Spotify, Slack and etc.

In previous versions of Ubuntu OS, users are facing many problems for switching two instances of similar app; then user had to use the tilde (~) button to get switch to two instance of the similar app. But, today all instances of apps are available on the system; when user uses the application switcher. Important that application switcher will be showing, whenever you press the <Spacebar and Tab> key at once.

There are no any hassle in updating this software, because if you find a notification for any major update then it will do automatically update within your machine. It is very easily, instantly, and without hindrances any other softwares working on your system.

Any user being with the basic skill of computer can easily install this operating system and configure on own system. It has also higher degree of customization and personalization. One of the main merit of Linux based OS is that users have the freedom to get customize their system like as modify font size, icon size, desktop screen, notifications enable/disable, hiding/showing icons, changing themes, and other customization.

Ubuntu OS is also come with a dark theme option, so user can easily enable the dark theme by going to ‘Settings > Appearance’ and select the ‘Dark‘ option.

Ubuntu Runs without Getting Installing:

Yes! Users don’t need to wait for completely installation process because user can easily run Ubuntu as Live directly from a pen drive. Therefore, user can easily carry this OS along with your files, and boot it on another friend’s system and carry on working as if PC is yours.

The command line tool has many in-built features to MS-DOS; therefore user can easily install and update app directly by helping the command-line tool in the Ubuntu.

Ubuntu Operating system is also enabled with Gnome extensions that allow you to open extension window then it will appear the different types of options by using them you can hide/show icons on desktop, docker and app indicator. By using the Gnome extensions, you can also change the size of icons on your desktop.

If you are using the Ubuntu OS then you don’t have to get install any firewall or antivirus on your system because this OS takes itself care of virus protection. The core developers are going to check the security gap and solving the security gap in code is instant.

Ubuntu operating system also allows you to get free up the sites moreover the running into the background or lagging your computer. Therefore, Ubuntu OS is very resource-friendly because it lacks GUI than to much other software.

The Ubuntu comes being with very simple graphical installers after their updates, if you compare it to other operating system then Ubuntu has simplified and polished basic installation.

After getting to know the benefits of Ubuntu operating system, now let us cover the some disadvantage and cons of Ubuntu OS; below shown each one:

You know very well that Ubuntu is a Linux distribution, so Linux has other distribution also known as Linux mint that is lighter to Ubuntu. So, this OS requires the high level system requirements and is also not sufficient customizable. Unlike Debian OS, Ubuntu operating system is less customizable. Debian is going to use the Kernel at the backend; and Linux mint is also Debian OS and is lightweight and much customizable to Ubuntu.

Not Suitable for Gaming:

Ubuntu has biggest drawback that user are completely unable to play any modern game on this platform. Whenever, you wish to run any game then you might be install an emulator or WINE or other external app. The Ubuntu operating system is not providing much better graphics, therefore gamer are getting to avoid the Ubuntu OS.

You know very well the Adobe is getting more popularity in graphic areas, Adobe software such as Adobe Photoshop, Adobe Illustrator, and Adobe Premiere Pro is not presented in Ubuntu.

Ubuntu OS is not supportable for MP3 format; therefore if you are any video developer otherwise editor then you might be getting more hassle in working over the Ubuntu OS for performing your tasks. Windows operating system don’t need any additional codes to play the video, but in the Ubuntu you might be required to add some apps or codes.

Not Compatibility with Hardware/Software:

Most of vendors don’t design the hardware drivers for the Ubuntu operating system. Cause of this, most of graphic drivers is not presented for the graphic card on Ubuntu. The graphic acceleration is also not usable for this OS, therefore user are unable to play the higher graphic games in Ubuntu.

If you are getting to face any issue in the Ubuntu OS then you will put a query on their forums or community. Sometimes, it will take up to 2 months to receive your problem sort out by the community help.

It is getting more hassle to install apps in the Ubuntu OS. Sometimes, apps are not able to install by App installer window. Therefore, you have to need to get install app via command line interface; as well as few apps require other third-parties libraries and installing those libraries is most difficult to new user.

Trouble About OpenVPN Vs Commercial Source:

One of the most criticisms of Ubuntu is the seeming commercialization; so canonical seems to get move the little further away from open-source identity of the operating system along with each update. Beyond of collaboration along with the open-source community, the corporation works on its own most of the time and misses out on the advantage of free input from thousands of developers.

Now i can hope that you have been fully aware about various advantages and disadvantages of Ubuntu Operating System; as well as involving with drawbacks and benefits of Ubuntu OS with ease. If this article is helpful for you, then please share it along with your friends, family members or relatives over social media platforms like as Facebook, Instagram, Linked In, Twitter, and more.